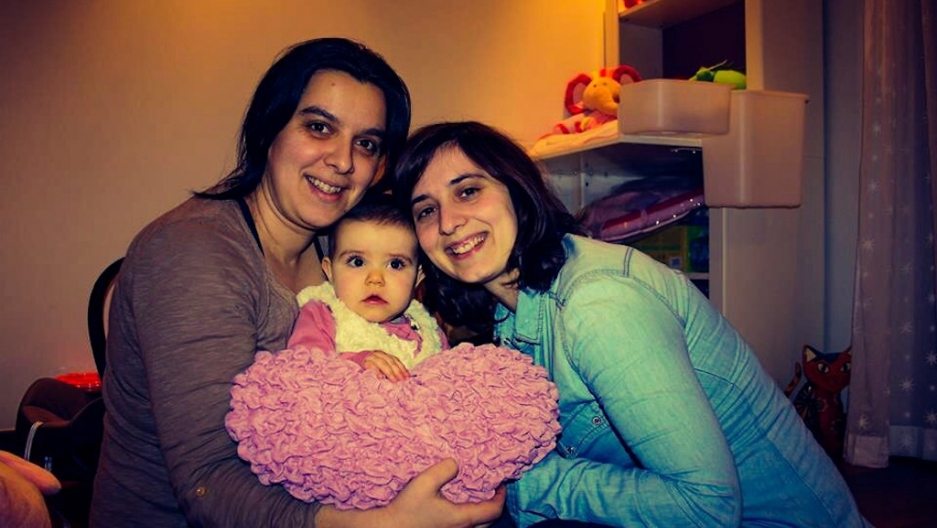 LISBON, Portugal – Matilde Custódio and Olga Miranda will never forget the date. A Friday last month, the 14th of March. It's the date Portuguese legislators decided Olga could not be registered as one of the official parents of her partner Matilde’s biological daughter, Carolina.

One of countless same-sex couples with children who are affected by the decision, Matilde and Olga have been living together for the past 11 years.

It was around lunchtime and the final bill on co-parental adoption for same-sex couples was up for a vote by the Portuguese Parliament. The proposal was simple, but the bill did not pass. The parliament voted 111 against the legislation, and just 107 in favor, with five MPs abstaining.

“How can this be over?” Olga asked. She said she still remembers March 14 as a very sad day. “I felt as I am still invisible and seen differently by our politicians.”

A couple of years ago when Matilde and Olga decided they wanted to have a baby together, they knew it would be hard. Portuguese law is not exactly friendly towards two women who want to raise a child. In Portugal, assisted reproductive technology is only made available to women in heterosexual marriages or life partnerships who have been diagnosed with infertility. So Matilde and Olga packed their bags and went to Spain, where Matilde could be artificially inseminated – no questions asked.

That is how Carolina was born.

Despite her many efforts, Olga could not keep the vivacious 16-month-old baby still as we all sat around a table so they could tell this correspondent their story. Carolina kept reaching over, trying to steal a cup of orange juice from the tabletop, but Matilde spoke without interruption.

“On that same afternoon [of the decision] I spoke with a lawyer,” Matilde remembered. “And then I told Olga 'at least there is some good news today: we have a meeting scheduled',” she said, referring to a first conference with a lawyer interested in representing them.

Their ordeal began when Matilde realized that if anything should happen to her, Olga would have no legal rights when it came to Carolina. The March 14 parliamentary ruling cemented that reality.

“Not long ago, I did a long road trip with my parents and everything passed through my mind. What if something happens to us?” Matilde asked. “And that's not the only thing. If I am away and Carolina gets sick, Olga has no right to decide anything at the hospital because she is not considered family.”

Under Portugal’s current legislation, the women are permitted to raise a child together, but they cannot both be officially recognized as parents — a technicality that leaves them in a legal void.

Currently, the possibility of co-adoption or the right to adopt your partner's child is extended only to heterosexual couples.

Already the limitation has presented problems for Carolina’s mothers.

On Dec. 5, 2012 — after seven hours of labor — Matilde gave birth at two in the morning. It was 4 a.m. before Olga left the hospital to head to work as an administrative assistant at a food company. Her boss knew her first child had just been born, but that made no difference.

Olga was not allowed maternity leave. As a result, one of the grandmothers had to fly from her home in France to lend a hand in the baby’s early days.

There once appeared to be hope, however, for Portuguese same-sex couples considering co-adoption.

Back in May of 2013, the first draft of the bill 278/XII, which proposed to “enact the possibility of co-adoption by the same-sex spouse or unmarried partner,” was approved in parliament with MPs from all parties voting in favor.

Isabel Moreira, one of the MPs who sponsored the bill, said she was so overwhelmed that she became teary-eyed.

Now, sitting in her office nearly a year later, she tried to explain the emotion she felt back then: “It showed the kind of civilizational progress that I was hoping for. And the fact that this was approved with a right-wing majority and on the 17th of May, the International Day Against Homophobia... I couldn't help but to cry.”

This is the kind of struggle Moreira has been fighting for quite some time, particularly since she became an MP in 2011, almost three years ago. Her struggle for these rights is etched into her left arm in the form of a tattoo — black numbers, which spell out the date that parliament approved same-sex marriages for Portugal, Jan. 8, 2010.

As an MP from the Socialist Party, the country’s main opposition party, Moreira said the proposed bill enabled her to take the first step toward parental rights for the LGBT community.

“The parliament was sending out a signal that these families weren't stowaway,” she said, explaining that they would finally be recognized by the state, like someone who finally gets a visa and can now enter a country freely.

When the bill's reviewing process began — one Moreira deemed “exemplary” — the subcommittee heard more than 20 people, most of which were in favor of passing the bill.

The survey included some of the most respected psychiatrists, psychologists and education experts in the country, who supported their professional opinions with statements from associations like the American Academy of Child and Adolescent Psychiatry. Organizations like the Portuguese Child Support Institute, the Superior Council of the Public Attorney's Office and the Portuguese Psychological Association also gave positive statements in favor of the legislation.

Even the Commissioner for Human Rights from the Council of Europe, Nils Muižnieks, sent a letter opining that the bill should pass.

It appeared especially simple because Austria — a country which also only granted the right of co-adoption to heterosexual couples — had just been convicted by the European Court of Human Rights for violating articles 14 (prohibition of discrimination) and 8 (right to private and family life) of the Convention on Human Rights.

What’s more, the most recent survey performed by Eurosondagem found that 40 percent of the Portuguese population supports co-adoption and full adoption by same-sex couples, a very different result from ten years ago, when a 2004 survey revealed that 58 percent were not in favor of changing the law.

But while Portuguese society seems to be opening up, its political counterpart has not followed suit, and the leadership from the right-wing parties currently in power — the Social Democratic Party (PSD) and Democratic and Social Centre (CDS) — do not want this discussion to go further than it has.

The initial May 2013 proposal for a referendum was hastily drafted, had many mistakes and was reportedly unfit to be approved by the Constitutional Court.

Finally, on March 14, 10 months after the first vote, the proposal was placed for floor action.

Newspapers reported that the PSD and CDS parties put significant pressure on MPs to vote against the bill. In the end, just four votes stopped it from moving forward. Eight MPs that had enabled the first draft to pass switched their votes.

“It was very violent, specially because the families were hopeful,” Côrte-Real said. “They sent out a message that children's rights don't matter, that human rights don't matter and that the international agreements on these issues are not meant to be respected.”

“It hurts me that there are parents who may have to face the humiliation of going to court and hoping the judge sympathizes with their cause to get parental rights on their children,” Moreira said. “I can't sleep well because of this and it is hard for me to believe the rest of the MPs do.”

But not everything is lost.

If Moreira's party gets a majority on the next term set to begin in October 2015, she said she is sure a new vote will turn out differently. And the situation may even change sooner than expected.

ILGA has requested the attention of the European Court of Human Rights, hoping the outcome will be a conviction like the one handed down to Austria. The situation is exactly the same, Côrte-Real said, so he has no doubt the Portuguese state will be forced to change the law.

In the meantime, families try to summon some remaining hope.

Matilde and Olga say they are sure the situation will change, and until it does, they will keep focused on planning their wedding and Carolina's baptism, and will keep coming back to the memory of the day she was born as their anchor — the happiest moment in all of this.

As soon as Carolina was delivered, Olga held her in her arms. Her eyes locked with Carolina's, she said, and tears started to run down her face.

“I can't describe the feeling,” she said. “I just kept thinking 'this is my daughter, my daughter!'”

Now all she needs to do is wait for the day the rest of the country acknowledges that.