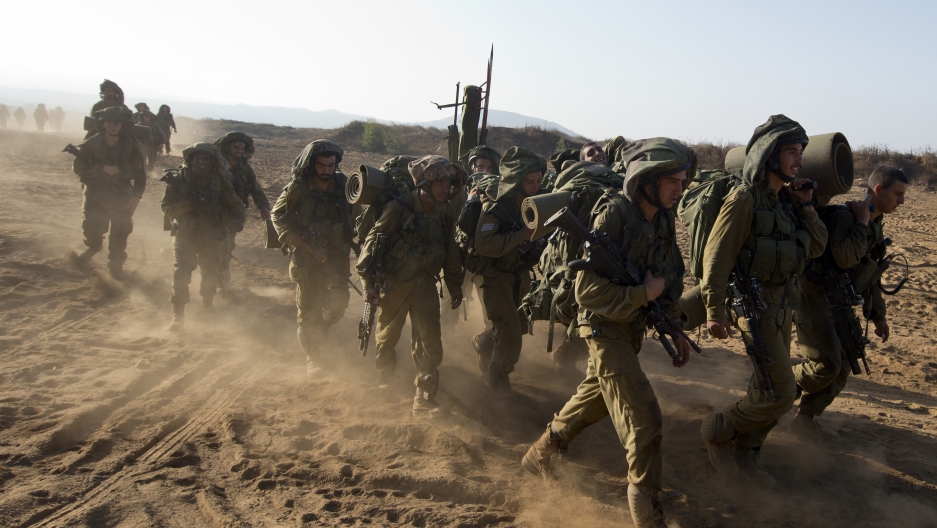 Israeli soldiers from the Golani Brigade take part in a military training exercise in the Israeli-annexed Golan Heights near the border with Syria.
Credit: Jack Guez
Share

JERUSALEM — For the first time in its history, Israel's army is getting ready to send voluntary military enlistment notices to Christian Arab citizens when they turn eighteen.

The unlikely impetus behind the move is none other than the Arab Spring, the popular rebellion revolutionizing the Arab world and in the process recalibrating the relationship between Christian citizens and the State of Israel. Shocked by a new climate featuring violence against Christians in Egypt and Libya, among other countries, and displacement in Syria, some of Israel’s Christian Arabs are pushing for greater participation in their home state.

Father Gabriel Naddaf, a compelling figure in a full black beard, royal blue robes and a kalimavkion — the traditional tubular hat worn by Greek Orthodox priests that renders his already imposing height Shaquillesque — is chairman of a group called the Israeli Christians Recruitment Forum (ICRF) that has been lobbying the government for the draft of Christian youth for the past two years.

"In light of the persecution of Christians in Arab countries just because they are Christians," Naddaf said in a meeting with journalists this week following the army's announcement, “our youth feels they must make a sacrifice for the country that is protecting them." He believes that these notices, which still aren't equivalent to the obligatory draft others face, will "open the door ... to full participation in society for Christians." But apart from an explicit welcome, the notices will include details on a possible preliminary meeting at the individual’s nearest IDF enlistment office, and reduce the amount of energy Christian youths need to expend volunteering for a service other citizens are brought into automatically.

Since the establishment of Israel in 1948, the country made certain exceptions to its universal, compulsory military service policy.

Although the Druze and the Circassians are subject to the same draft as the Jews, Druze and Circassian women are exempt, unlike Jewish women.

Ultra-Orthodox Jews have been exempted entirely, due to the need to revive their culture after it was almost eliminated by the Holocaust.

Arab citizens of Israel have also been released from duty, the state accepting the argument that an Arab could not be asked to bear arms against an Arab brother. Christian Arabs, the majority Christian group in Israel, are included under this exemption along with their Muslim brethren.

All exempt demographics may still volunteer, but must seek out the necessary information themselves. The Bedouin, who are Muslims, have a long tradition of volunteering for service, though they are not required to join.

Until 2012, according to ICRF, only about 35 Christians a year volunteered for military service, alongside some 400 Muslims.

Now, some are demanding what Naddaf calls "an equal part in the life of the state." According to an Israeli army spokesman, about 100 Christians have enlisted in each of the past two years. The ICRF says that 427 Christian women are currently in the national service, the common alternative to army service. That means that 30 percent of about 1,800 eligible Christian youths are engaged in some type of service "when the entire thing has depended on their own initiative," says ICRF spokesman reserve Captain Shadi Khaloul, speaking at the meeting with Naddaf.

"Imagine, if we do a good job educating them, what the potential is.”

Those protesting the move, like Basel Ghattas, a secular Christian Arab parliamentarian representing the National Democratic Assembly, see it as an attempt to divide Israel’s Arab population, or even a first step in the conscription of all Arabs.

"In a year they will see that the Christians are enlisting and apply compulsory service on all of us,” he said during an Army Radio interview on Tuesday, adding, "Of course we're opposed."

He called on Christian youths to return the enlistment notices "by mail or burn them."

"I didn't hear [Arab leaders] screaming when Bedouin Arabs enlisted, when the Druze were drafted,” said Khaloul, who himself served from 1993-1997 as one of Israel's first Christian paratroop commanders. “Everyone else integrates into society, so why do they expect us to remain silent? What problem do they have with Christians?"

Naddaf, 40, has paid a significant price for his stance. Last December, one of his sons was attacked. Naddaf himself is now shadowed by bodyguards. Following the press event on Tuesday, some new Facebook posts and a Youtube video once again threatened his life.

For Khalloul, the very premise whereby Christians are considered part of the Arab nation, and thus are presumed to owe allegiance to fellow Arabs rather than to the state of Israel, is flawed.

"The indigenous Christians here spoke Aramaic," he says. "The Arabs came from the Arabian peninsula and conquered the entire Middle East, and we are now asking the State of Israel to help us retrieve our stolen identity, and allow us to make our own decisions."

Samer Jozen, a native of the Galilean village of Meilia, also a former paratroop soldier, says, "We love this country. We are citizens just like everyone else. My cousin was an advisor to a minister." His daughter is joining the air force in two months.

By his estimate, "80 percent of the current movement has been influenced by the Arab Spring." In short, seeing the plight of Christians in Arab countries during the Arab Spring is sobering, not to say terrifying, for many local Christians.

"Dalia," 35, a Christian officer from the center of Israel who refused to be identified due the nature of her current job, said the new recruitment policies "will make it easier on the kids who want to join but are afraid. Now they can say 'I got a notice and I just followed through.'"

"Of course this has angered some people," she allows, "but we live in a democracy, and everyone has the right to decide what to do."

The movement for Christian recruitment and its opposition are based in the Galilee, where the bulk of Israel's Christians reside, almost all in mixed communities. Shlomo Buchbut is the mayor of Ma'a lot Tarshiha, one such city, that likes to call itself "the Switzerland of the Galilee." It is a quiet town, and he has been mayor for 37 years.

He says that many of the Christian leaders he speaks with complain that starting a new policy now is just stirring trouble. But "if you had drafted us from the beginning, we would have gone, like everybody else."

"Between us," the mayor said in a conversation with GlobalPost, "I think that every citizen should be drafted, period. Muslims, Christians, Jews — everyone. If my kids serve, everybody's kids serve."

He says that some Arab leaders ask him, "'What do you want, for us to fight against our own brothers?'"

"I say, look at Lebanon and Syria," Buchbut says. "What do you think they are doing there? You live in a country and you have to defend it."