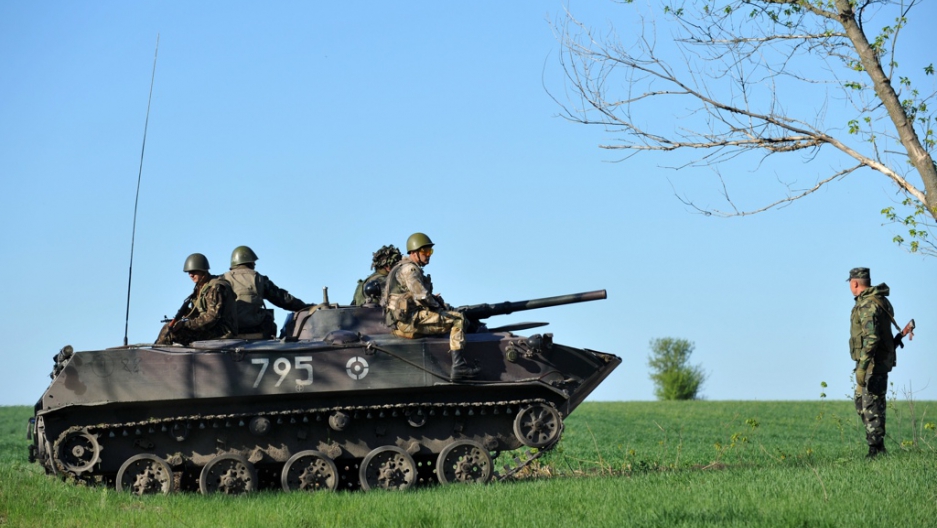 Ukrainian soldiers sit in a tank at their newly erected checkpoint near the eastern Ukrainian city of Slavyansk.
Credit: Genya Savilov
Share

The skeptics were right.

Just one week ago, as top diplomats in Geneva heralded an agreement on Ukraine that was supposed to defuse the crisis, many warned that tensions were too high to be easily resolved.

Now the situation has deteriorated even further, with clashes in eastern Ukraine that have left at least five people dead.

Presidents Barack Obama and Vladimir Putin mutter darkly, if vaguely, of “consequences” if their opponents do not back down, while Ukraine’s acting prime minister warns that Europe may be on the brink of World War III.

A worldwide conflagration is still not very likely, the experts say, but as the war of words deepens there is increased danger that Washington and its allies could stumble into a situation that no one intended.

“I don’t want to make too much of the centennial of World War I,” said Thomas Graham, a senior fellow at the Jackson Institute for Global Affairs at Yale University, and a managing director at Kissinger Associates. “But, just as in 1914, the parties could be trapped by politics and rhetoric, and by their misreading of the other side. It is not highly likely, but I don’t rule it out.”

Graham, who served as President George W. Bush’s special assistant and National Security Council’s senior director for Russia from 2004 to 2007, is concerned by what he sees as the US failure to get Russia right.

“It is our problem as a policymaking establishment that we cannot understand how the other side looks at the world,” Graham said. “We think, ‘how can Russia be opposed to prosperous, democratic societies on its borders?’ We do not understand why they consider such moves to be against them.”

The US miscalculated the degree of extreme anti-Russian sentiment in Ukraine’s Maidan demonstrations, Graham says, and therefore did not understand or prepare for the Russian response. But Moscow’s anger at Ukraine’s rapprochement with the West was less about expansionism and more about security.

“Putin does not want responsibility for the socio-economic development [of Ukraine],” Graham said. “He just wants some assurances that it will not become part of an organization that is overtly hostile to Russia.”

Guaranteeing that Ukraine will not be absorbed into NATO should be a no-brainer, according to Anatol Lieven, a war studies professor at King's College London and a senior fellow at the New America Foundation.

“Such a promise is politically difficult for the West, but in moral and practical terms should be extremely welcome,” he wrote last month in an essay that circulated among Russia specialists. “The USA and its allies have now demonstrated … that there are no circumstances in which they will go to war in the lands of the former Soviet Union. To offer NATO membership to Ukraine is therefore the worst kind of strategic and moral irresponsibility.”

But mistrust of Russia runs deep in the foreign policy establishment, where many of the players grew up during the Cold War. This has led to missteps and lost opportunities.

After 9/11, Putin was one of the first world leaders to call the White House and offer assistance. When the war in Afghanistan began, Russia made supply routes available to NATO through its territory, and was prepared to go even farther. According to Graham, they proposed strategic airlift services to transport wounded soldiers out of the country.

“The US said no, because it would have meant having some Russian military personnel on Bagram [the US base in Kabul],” he said. “Time and again, Russia came to us with reasonable proposals that we rejected out of hand. If our goal was to build a more positive relationship, we could have done that.”

But instead, the US and its allies forged ahead with NATO expansion, which destroyed Russia’s faith in a less antagonistic future with its former foes.

“They do not think we respect them,” Graham said.

Jack Matlock, a former US ambassador to Moscow, agrees. Matlock was in Russia during the chaotic period when the Soviet Union was dissolving. Like Bush’s former special assistant, Matlock thinks the US could have done a better job at creating a connection with Moscow.

The expansion of NATO under Presidents Bill Clinton and George W. Bush were the equivalent of “a swift kick to the groin” for Russia, he wrote in The Washington Post last month.

“The sad fact is that the cycle of dismissive actions by the United States met by overreactions by Russia has so poisoned the relationship that the sort of quiet diplomacy used to end the Cold War was impossible when the crisis in Ukraine burst upon the world’s consciousness,” Matlock wrote.

This is what is making the present situation so dangerous, Graham says.

“How do you de-escalate at this point?” he asked. “We do not have the necessary channels of communication.”

This was painfully obvious last week in Geneva, when all sides signed on to a compromise that none was really prepared to back.

The agreement called for “all illegal armed groups” to lay down their weapons. Almost immediately disputes arose over who was illegal, who was to go first, and who was responsible for ensuring compliance.

“All the parties were convinced that the other side was controlling the situation,” Graham said.

The US State Department is endorsing photographs it says prove that Russian forces are instigating a separatist movement in eastern Ukraine. Russia, for its part, points to visits to Kyiv from the head of the CIA and the US vice president as evidence that Washington is “running the show” in Ukraine.

Tensions are so high at this point that anything could happen.

“We do not know how this is going to play out,” Graham said. “No one really controls the forces. If there is widespread violence in eastern Ukraine, Putin can’t not send forces in. But if troops move across the border, what will the West’s response be? Sanctions aren’t going to do it.”

US Secretary of State John Kerry is conferring with European allies about imposing stiffer penalties on sectors of the Russian economy.

This might have some effect. Standard & Poor’s ratings agency has already downgraded Russia's credit to just a step above junk.

But neither Washington nor Europe is prepared to sacrifice its own interests to penalize Russia.

“Right now they are desperately looking for sanctions that make them appear to be doing something but don’t really cost them anything,” Graham said.

If armed conflict breaks out between Russia and Ukraine, however, the stakes would rise in a hurry.

“We may have to provide lethal aid to Ukrainian troops,” Graham said. “It is not difficult to spin out a scenario where things could get really nasty.”

Washington has not really developed a suitable response to Russia in the Ukrainian crisis, he insists.

“We don’t know what to do,” he said. “Russia has outplayed us. We have been caught flat-footed, without a serious policy.”

This will take a long time to play out, he maintains.

“It is definitely a different period in US-Russia relations,” he said. “No one talks about a ‘reset’ any more.”

Back in 2009, then Secretary of State Hillary Clinton and her Russian counterpart staged a ceremony where they pressed a red button labeled “peregruzka,” which the US thought meant “reset.”

In fact, it means “overload,” a mistake that amused Moscow and embarrassed Washington. But maybe overload is exactly right.

“Clinton should say that it wasn’t really a mistake,” Graham laughed. “It was a prediction.”