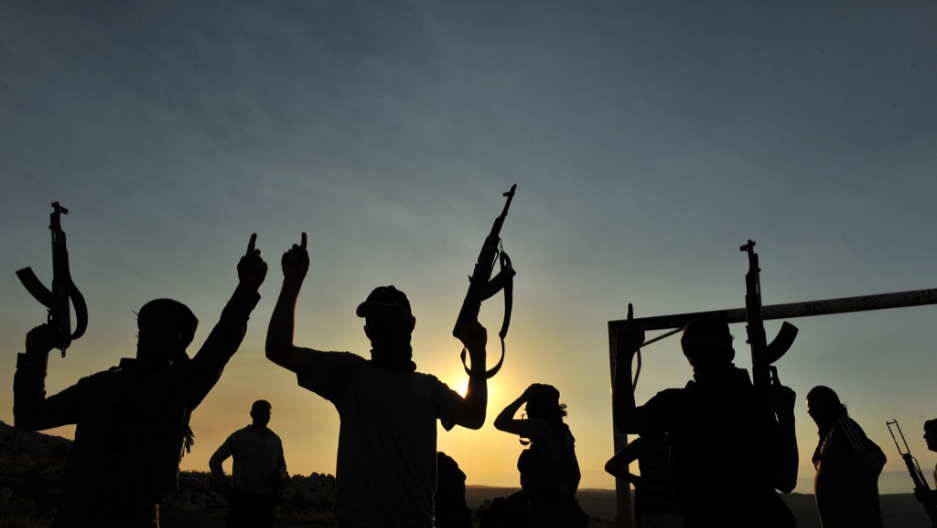 For aspiring British mujahedeen, the war in Syria is a relatively easy one to join.
Credit: Bulent Kilic
Share

LONDON, UK — The man in the video squats in the dirt of a Syrian field, a rifle clenched in his hands, a balaclava obscuring his features.

He cautions aspiring Islamic fighters that they may not be strong enough for the perils of the frontlines. His words, delivered in a tough London accent, sound like a challenge.

He’s speaking to boys in east London projects and fathers in Birmingham suburbs — men who see in the grainy video a vision of the type of man and the type of Muslim they would like to be.

Between 250 and 400 Brits have traveled to Syria to join forces fighting against the regime of President Bashar al-Assad, according to estimates from the Home Office and counterterrorism experts.

On Thursday, after the death of a British teenager in Syria earlier this month, police announced a new effort encouraging Muslim families, particularly women, to come forward with information about loved ones who may be planning to travel abroad to fight.

Some British Muslims and campaigners criticized the initiative, saying that relatives who had made up their minds to fight were deaf to their families’ pleas — and that they wouldn’t trust police with the information, anyway.

Brits fighting in Syria are compelled by a complex and wide-ranging set of motivations, experts say: a thirst for adventure, a sense of religious duty, the desire to help a humanitarian crisis the world doesn’t seem to be doing much about.

The government’s fear is that fighters who live through their Syrian experience will return with radical anti-Western beliefs — and the tactical experience to turn those sentiments into violence.

“It’s become a very bright flame that is drawing in moths from around the world ... a huge, confusing mess of people who are all drawn to the same narrative,” said Raffaello Pantucci, a senior research fellow at the Royal United Services Institute.

There are 11,000 foreign fighters from 74 different countries in Syria, more than in any conflict since the Soviet war in Afghanistan in the 1980s, according to the International Centre for the Study of Radicalisation at King’s College London.

The majority hail from the Middle East, but would-be fighters — mostly men but some women — have come from as far as China and Australia.

A sampling of the roughly 20 Brits killed in Syria so far is a cross-section of English life: a 41-year-old truck driver and father of three from the London suburbs. A 23-year-old call center worker from Portsmouth. An 18-year-old from the beach town of Brighton who ran off to the battlefront with his brothers, aged 16 and 20.

For aspiring British mujahedeen, it’s a relatively easy war to join. Getting there doesn’t take much more than a four-hour commercial flight to Turkey and a meet-up with one of the many convoys crossing the border into Syria.

Unlike in previous conflicts, those curious about life on the frontlines can find a wealth of information in English on YouTube, Twitter, Instagram and other social media from fighters trumpeting their own battlefield exploits and urging others to join them.

A key recruiter for British Muslims is a group called Rayat Al Tawheed, a group of Brits attached to one of the rebel groups.

Peppered with references to English life and heavy-handed graphics and music, their videos are aimed at Brits considering a Syrian journey.

In a video posted April 20 to YouTube, a masked man with a working-class English accent takes viewers on a seven-minute tour of his fellow fighters’ living quarters.

“You just got your little basic stuff,” he says as the camera pans over a washbasin cluttered with a hairbrush, a hunting knife and a can of Hollister body spray.

“Live amongst us,” he says. “By Allah, it’s a better living than where you are.”

In another clip posted April 21, titled “Advice from Two Mujahideen,” two portly masked men in a dirt field chastise British Muslims for failing to support the wives and children of men who have left the UK to fight in Syria.

“I’m addressing you brothers … from the capital, up north, Midlands, wherever you may be,” says one.

“What are you doing for the women?” asks his companion, dressed in a T-shirt and clutching an AK-47. “Do you know that she might not have any food in her cupboard or her fridge? Do you know that the child is running out of Huggies?”

“What will you say to Allah when he questions you?” the man continues. “That the government was too harsh on us? That David Cameron and his kuffar [a derogatory term for non-Muslims] alliances were too harsh on us? ... By Allah, we should be ashamed of ourselves.”

The government has thus far taken a hard line against people planning to travel to Syria or returning from there. Forty people have been arrested so far this year in relation to such travels, compared to 25 in all of 2013.

In December, Home Secretary Teresa May stripped 20 dual nationals in Syria of their British citizenship to prevent them from returning home.

“People who are thinking about travelling to Syria to engage in terrorist activity should be in no doubt that we will take the strongest possible action to protect our national security, including prosecuting those who break the law,” said Immigration and Security Minister James Brokenshire.

Counterterror experts have cautioned against a heavy-handed approach that treats all returning fighters as criminals, however.

“There are legitimate security concerns because it doesn’t take very many people to cause a big problem, [but] I think it’s wrong to assume they all want to go learn to make bombs to blow up the London Underground,” said Richard Barrett, MI6’s former director of Global Counter Terrorism Operations and former head of the UN’s Al-Qaida and Taliban monitoring team.

Young men who travel abroad with idealized views of war may find themselves at odds with the messy reality of combat, he said.

“If you go, it may be that you join one of the extremist groups because they’re the most efficient groups. They’re the best organized,” Barrett said. “You can go along with their approach until they start cutting off people’s hands and then you’re a bit fed up and you go home.”

The authorities need to be careful not to alienate those who return disillusioned, he added.

“[A figher] may have come back because he was horrified by the things they were doing, but if you throw him in prison, he might start to think they were right after all.”