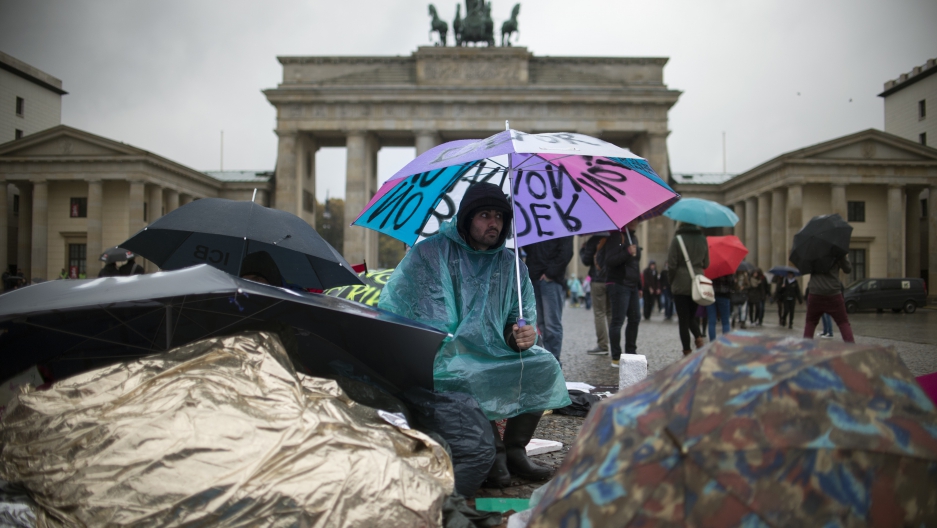 As Berlin's excess housing has disappeared, squatters have been driven out of once-derelict buildings.
Credit: Johannes Eisele
Share

BERLIN, Germany — In a thicket of shanties improvised from scrap lumber and plastic tarps, 27-year-old Lukas runs a bicycle's rubber inner tube through a bucket of water, searching for a puncture that eluded him on the first go.

Next to him, a discarded lampshade — lightless, as there's no electricity or running water here — is speared on a post beside a stolen shopping cart that has been repurposed as a sieve for the camp's garbage. Farther on, a cracked aquarium now used as a planter for unidentifiable seedlings stands amid yet more detritus — a filthy sofa, a wheel-less office chair, rusted bedsprings.

The infamous squatters who once occupied vacant lots and abandoned buildings across Berlin have all but disappeared. But as the city's renaissance drives up rents and wealthy migrants from southern Germany displace leftists, artists and slackers, a new alliance of anti-gentrification activists, immigrants and refugees is emerging in pockets of resistance like this one.

Home to 40-odd permanent residents and a constant flow of temporary campers, the Cuvrybrache or “Cuvry street fallow,” originated during a protest against a multimillion-dollar project to redevelop the banks of the Spree River, which flows through the city center.

But as the presence of African refugees, a family of Roma and economic migrants from Poland suggests, it's now on the verge of becoming something more, says Lukas, a tall, thin hippie from Hamburg with blond dreadlocks and a sprinkling of sun freckles across his nose.

“The big time of squatting in Berlin is over, but it's not done yet, as you can see,” he says.

In many ways, the history of squatting reflects the city’s story.

Home squat home: Squatters were evicted in February 2011 from this building after occupying it since the early '90s.

The squatting movement arose in what was then West Berlin from the anti-parliamentarian student movement in the 1970s and expanded as a housing crisis deepened throughout that decade, the result of post-World War II policies that discouraged low-income rental projects.

When the Berlin Wall came down, a new burst of squatting erupted to occupy the sudden appearance of abandoned buildings in the former East, says University of Nottingham historian Alex Vasudevan.

Over the past few years, however, construction has failed to keep pace with demand. The excess housing that long kept prices low — and allowing Berlin to remain a haven for artists and dropouts — has disappeared. Rents are rising faster than wages, turning immigrants and hipsters into allies.

“Now squatters and other housing activists are collaborating with migrant communities and refugee groups in a wider activist politics, which hasn't happened in Germany since the early '70s,” Vasudevan says.

Over the past five years, high-profile evictions have demonstrated Berlin's new commitment to protecting owners' property rights, while some of the oldest squatter communities have been forced to go legit — and turn capitalist — to survive.

In 2010, police faced down hundreds of protesters to evict residents of a five-story central Berlin apartment house that was then called “the last rent-free squat in Berlin.”

Meanwhile, residents of Rauchhaus, a squat first occupied in 1971, now offer classes in yoga, silkscreen painting and welding and operate a proletarian, albeit capitalist, bar to foot the tax bill since having gained legal title to the building.

But the battle for the city's soul is hardly over.

Less than a year after the supposedly last rent-free building was emptied, 2,500 police had to be deployed to evict residents from yet another squat in the neighborhood of Friedrichshain in the former East.

Even as housing prices rise, threatening the laidback lifestyle that prompted Mayor Klaus Wowerheit to tag Berlin with the nickname “poor but sexy” a decade ago, a steady influx of asylum seekers and immigrants from poorer European Union countries is revitalizing the struggle, says 26-year-old housing activist Helena Mueller of the group “Wir Bleiben Alle” (We're All Staying).

“Their problem is our problem,” says Mueller, who used a pseudonym because of the illegal nature of her group's activities. “That's why we're working with them.”