A resident gestures during a protest against the death of a man in Pavao-Pavaozinho slum, in the Copacabana neighborhood in Rio de Janeiro April 22, 2014. Residents have accused Police Peacekeeping Unit officers of causing the death of 25-year-old dancer Douglas Rafael da Silva Pereira.

There were violent clashes in Rio de Janeiro Tuesday night just weeks before the city and the rest of Brazil play host to the World Cup soccer tournament, leading many wondering if Rio will be safe and ready for the marquee event.

Residents in the Pavao-Pavaozinho favela were protesting the death of a 25-year-old local dancer who they say was beaten by police who thought he was a drug dealer. An official report claimed the dancer died in a fall, fleeing a shoot-out between drug gangs and police. Residents also set fire to cars and tires.

The violence occurred just a stone’s throw from the famous tourist area of Copacabana. To understand how this could happen so close to an area that will soon host hundreds of thousands of soccer fans from across the globe, it’s helpful to review Rio’s unique topography.

The city is right on the water and is very flat. The land juts suddenly and dramatically into the sky with steep hills throughout the city. Original city dwellers lived in the flat areas, but at the end of the 19th century, soldiers had nowhere to live in the urban area. So they founded a small neighborhood built on a hillside just outside of Copacabana. For more than a century, other poor people followed that pattern: they couldn’t afford a home in the established city, so they colonized the hills. 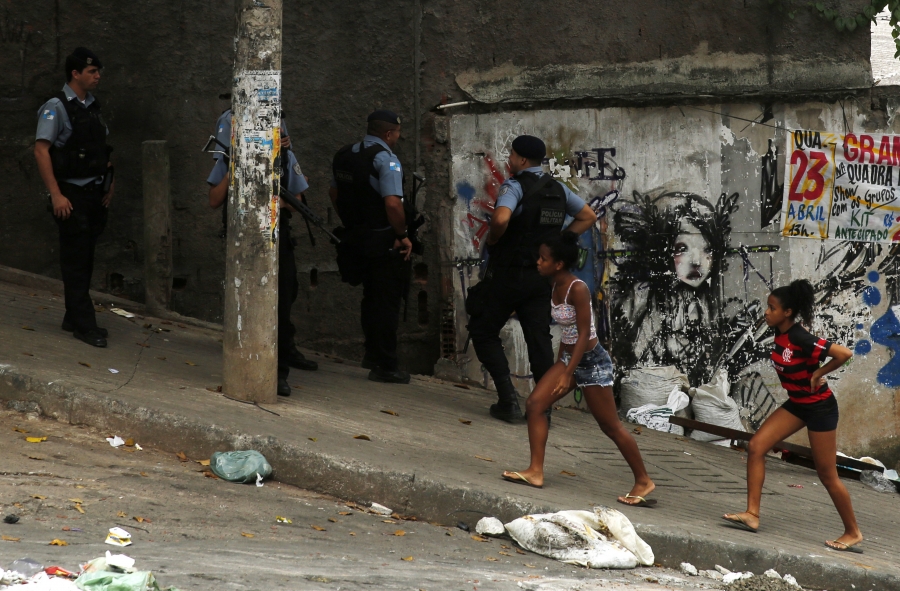 Police officers patrol around the Pavao-Pavaozinho slum in the Copacabana neighbourhood in Rio de Janeiro April 23, 2014.

Today there are hundreds and hundreds of small favelas throughout Rio. The city estimates 1.4 million people live in the hillside slums.

These slums also attracted drug traffickers because there were few cops and the drug lords could work with relative impunity. (To get a sense of what favela life was like, you must see the incredible film, City of God.)

After Brazil won the World Cup and Olympics, in 2008 Brazilian authorities announced its new "pacification" program. Here's how it works: Authorities announce a few days in advance that they‘re entering a favela with guns at the ready. Basically, they're saying to the drug traffickers: Get out, or you're in trouble. They do this to avoid a fight and it generally works. After the police come in and the drug dealers leave, the engineers and the social workers arrive to make the favela a more liveable place.

I visited several pacified favelas when I was in Rio on a reporting trip in May 2013, on my own and guided by city officials. The city likes to take reporters to its model favelas where they're building things like new apartments and parks for children.

I visited Babilonia, which is right next to the favela where the violence is now occurring. City officials took me there, but also let me walk around and talk to anybody I wanted. Even there, at the model favela, it was a mix of opinions. Some people I met loved the pacification program: they feel much safer and like they're finally getting some attention from the government. Others residents said the improvements are happening too slowly, or they're being pushed out of their homes to build new roads. 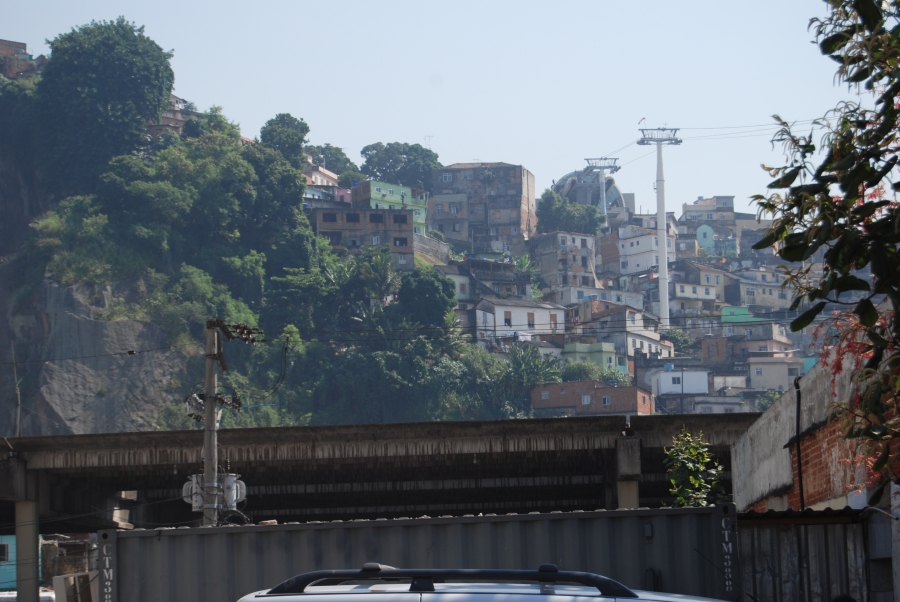 A view from below of one of Rio's famous and colorful favelas.

There’s also a lingering police presence, a few guys sitting around with large guns. They’re both welcomed and reviled.

Many of the non-pacified favelas remain unsafe, so you don't just go wandering around, unless you know somebody. I did meet with some favela dwellers in a non-pacified slum on the outskirts of the city. Bruno Souza Santos, a college student, was not happy about the pacification program happening in other favelas.

Speaking through an interpreter, Santos said, “We are suffering the impact of pacification. As police units move into other favelas, drug lords run away, and then they move into our favela.”

I also asked him if he'd welcome the police into his favela. Yes, he said.

So is this week’s violence cause for alarm with the World Cup just weeks away?  That’s a difficult question to answer. Rio's favelas have always been violent places, firefights and protest happen all the time. There was a shootout in a favela I was supposed to visit when I was in Rio, and police wouldn’t let me enter. The incident blew over in a few days and nobody outside of Rio much cared. But now that we're a few weeks away from the world coming to Brazil, this outbreak of violence is getting more attention.

Has the pacification program worked? Also a difficult question to answer.

I spoke with many favela residents, government officials, gadflys, and non-favela Cariocas (residents of Rio), and from all their answers, I don't think one can call the pacification program a total success. But I also don't think it's fair to say the program has been a failure. Many favela residents have clearly benefitted — and many non-favela Cariocas I met say they feel safer.

It's also unrealistic to think that Brazilian authorities are suddenly going to make all of the city’s slums, and the 1.4 million people who live there, safe and comfortable in just a few years. City officials say the pacification program will last until at least 2020, long after the World Cup and Olympics are gone.