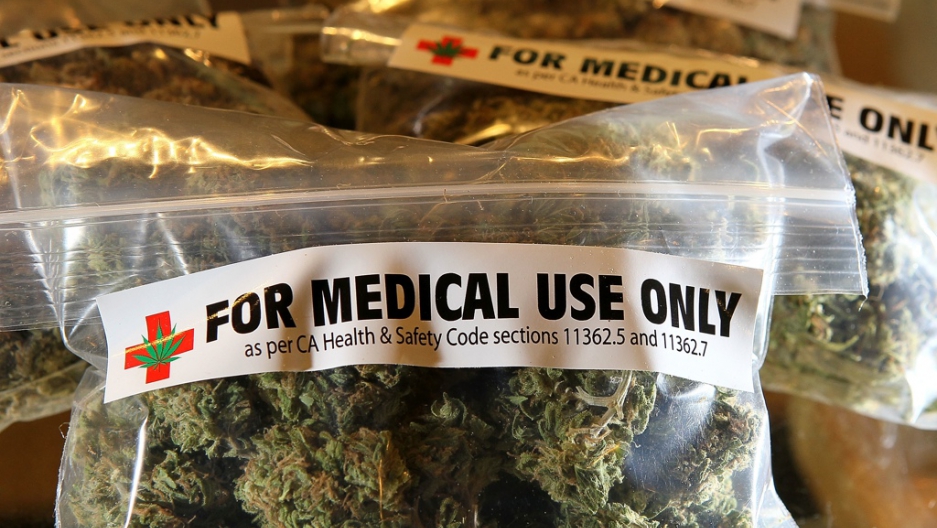 Take two of these and call us in the morning.
Credit: Justin Sullivan
Share

MONTEVIDEO, Uruguay — It ain’t easy to study the positive effects of pot in the United States.

First, there’s the legality issue. While medicinal marijuana is now legal in more than 20 states, the federal government still considers pot illegal, which means scientists can’t just give it to volunteers and measure whether it makes them feel better.

There’s also the problem of supply: Right now, the only legal way to study pot is to apply for a batch of it from the one official grower of federally sanctioned cannabis, at the University of Mississippi. (Experts say the weed is dry, harsh and awful.) Then you have to get your study sanctioned by a host of federal agencies.

Put simply, studying medical marijuana in the United States is a real pain.

Not only has this small Latin American country just become the first nation on Earth to legalize the cultivation, sale and use of marijuana, but its leaders recently declared that they’re ready to go a step further: They want Uruguay to become a hotbed for research into medicinal marijuana. And, far from making things difficult, the government is actively encouraging scientists.

“The first step in convincing others is to be convinced yourself. You have to believe in something profoundly,” Diego Canepa, the president of Uruguay’s National Drugs Council, told a conference on medicinal marijuana here earlier this month. Canepa said the government wants to see the data on medicinal pot, and urged scientists here and abroad to bring Uruguay’s leaders results.

That’s got the international community of pot scientists all giddy.

Researchers from across the globe who attended the conference were buzzing about the possibility of studying weed in a country largely free of the regulatory boundaries that exist elsewhere, where supplies of weed for research will be abundant and cheap and where their results will be welcomed.

“There’s a lot of researchers, myself included, and others from this conference, that our minds are just spinning with possibilities of the kind of research that can be done,” said Amanda Reiman, a lecturer at the University of California, Berkeley and a policy manager for the pro-legalization organization the Drug Policy Alliance.

“Research done in Uruguay that’s scientific and that ideally gets published in a scientific journal would have a big impact on the state level,” said Rick Doblin of the Multidisciplinary Association for Psychedelic Studies.

There are significant limits to what can be accomplished in Uruguay, however.

Raquel Peyraube, a Montevideo doctor who’s been researching marijuana for decades, cautioned that scientists here largely lack the resources to conduct the sorts of trials that would carry international weight.

While there’s no shortage of enthusiasm, Peyraube said she hopes to see international research organizations and well-respected scientists in the field bring resources to Uruguay to help get big studies off the ground.

And, as far as convincing the US federal government of the medicinal benefits of pot, any studies here would likely be a non-starter, said Rick Doblin, president and founder of the Multidisciplinary Association for Psychedelic Studies, a research organization that has sponsored US-based research into weed.

Doblin said the federal government, like much of Europe, requires any “new” drug to run an arduous gauntlet of study and approval. Step one in convincing the feds is to conduct studies using cannabis that’s been certified as “medical grade” by the Food and Drug Administration, Doblin said. Besides that supplier in Mississippi, no other company or grower in the world has yet done that, and passing this first hurdle could take years and cost millions of dollars, he said.

In the coming years, Uruguay's growers could start competing for FDA approval with companies in other weed-friendly countries like Canada and Israel.

Studies conducted in Uruguay would be more useful in influencing the debate at the state level in the US, Doblin said. While the federal government might shun drug research that hasn’t been channeled through its official pipeline, state lawmakers might well take into account studies done in this South American country when defining their policies on pot use.

In Colorado, for example, lawmakers have recently been discussing whether to add post-traumatic stress disorder to the list of conditions that are legally treatable using medicinal marijuana, Doblin said. The move is being opposed by a group of psychologists who argue there’s no evidence that pot helps sufferers of PTSD.

A well-regimented study out of Uruguay could greatly influence that discussion and others like it around the country, he said.

“Research done in Uruguay that’s scientific and that ideally gets published in a scientific journal would have a big impact on the state level for states that were thinking of expanding the medical use of marijuana to conditions where they claim there’s no research,” Doblin said.

More from GlobalPost: Latin America's push to legalize it

Peyraube, the Montevideo doctor and researcher, said offers are already coming in from scientists around the world.

She’s currently planning two studies on medicinal pot, Peyraube said, one with US-based researchers and one with scientists from Spain.

What’s changed in Uruguay goes further than an acceptance of these sorts of studies, Peyraube said. After decades of aversion to her research into pot, it seems the entire nation has begun to shift its attitude vis-à-vis the root cause of drug problems in society.

“The politicians here need research to support the [new marijuana] law and we who agree with the change of policy want to contribute to that,” she said. “We want to be helpful. We want this law to work.”