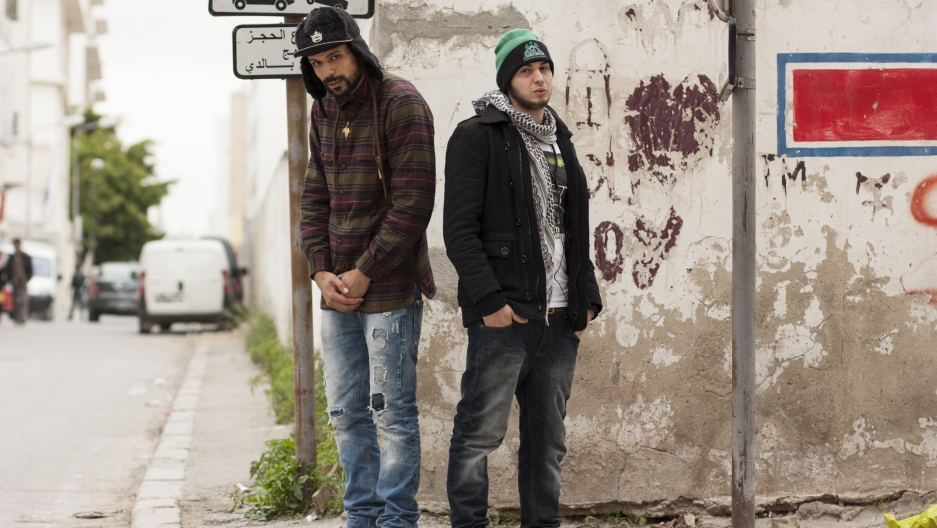 Underground rappers Med Big-M and Red B'm, part of a group known as "Zone 5", pose in downtown Tunis. Hailing from very poor areas of Tunis, they tap into the frustrations of the young and unemployed in Tunisia.
Credit: Nicholas Linn
Share

TUNIS, Tunisia — A diehard hip-hopper sporting dreadlocks, piercings and an African continent pendant on a necklace, Nakazaki Dali stands out among the crowd of Tunisian men in dark leather jackets and gelled-back hair.

Though 21-year-old Nakazaki doesn’t fit in to this business-as-usual crowd, he’s not alone. The young Tunisian rapper is just one in a generation of young counter-culturists rocking the political boat in Tunisia.

The 2010 uprising that erupted against the regime of former president Ben Ali was also an eruption in Tunisia’s hip-hop scene, and it changed everything for artists.

“Before you had to speak in metaphors, not directly. Now you can talk,” he said, describing the severe repression visited on rappers who dared denounce corruption or political exclusion in Ben Ali’s Tunisia.

Twirling one of his dreadlocks in his fingers as he looked out from a balcony over the Tunis downtown, Nakazaki — who took his pseudonym from the Japanese city bombed in World War II — tells the story of hip-hop’s quiet entrance into the poor Tunis neighborhood of El Omrane, where he lives.

“Before, when I was little, there wasn’t any rap or hip-hop culture,” said Nakazaki, who is now one-third of the rap group Zone 5 — after the name used on maps of Tunis to demarcate a patch of rough outskirts where he was born.

“When I heard about this thing called rap I started digging into it myself. I started on my own, memorizing lyrics, and writing. Of course, as a little kid writing on his own, I came up with something pretty weak,” he said, describing his first attempts at penning rap lyrics. “I didn’t plan it. I was born with the passion [for hip-hop],” he continued.

As Nakazaki got older, he became more serious about hip-hop. Years of listening to American rappers like Tupac Shakur and The Notorious B.I.G., whose anger and passion grabbed him but whose lyrics he couldn’t understand, lead him to seek out Lotfi Double Kanon. The anti-authoritarian Algerian hip hop artist rapped about issues endemic to the region, like authoritarianism and joblessness, and struck a little closer to home for a Tunisian like Nakazaki.

By the time he was a young teenager he’d finally met two other rappers in his neighborhood, HT and Big Kamikaz.

Looking for more music from Lotfi Double Kanon and other politically-conscious Arab rappers, Nakazaki and his friends sifted through cassette tapes in open air markets in search of what he called “true hip-hop.”

“The cassette vendors usually didn’t even know what they were selling,” he said. “Just a pile of tapes, and we had to pick out the good stuff.”

But the relief of knowing he was not alone, and finding artists who touched on the desperation of a life of poverty in a police state didn’t make the actual conditions in Nakazaki’s neighborhood any better.

“People in my crew,” Nakazaki said, “They had to steal, to fight, to hustle just to live.”

To make ends meet, young people sold drugs and alcohol in the neighborhood. They smoked zatla, a kind of cannabis resin, to dull the pain of poverty, Nakazaki said.

Many in Hay El Tadamon — a vast, poor fringe section of Tunis that sits within Zone 5 — where he later moved, were arrested and beaten by police for carrying even a small amount of zatla.

And though the post-revolution climate for hip-hop seemed to allow more directly critical speech, the youth in Tunisia’s underground say police still use zatla as an excuse to crack down on freedom of expression.

“[The police officer] says he arrested you for carrying zatla, but it’s actually because you rapped a song that he didn’t like,” Nakazaki said.

The changes that took place in the hip-hop movement during and after the 2010-2011 uprising also presented another problem.

The celebrity accorded to certain politically conscious rappers, like the now-famous El Général or Hamzaoui Med Amine, has lead to a glut of voices from young people who are less committed to the political message. According to Nakazaki, they are simply trying to gain fame or a bit of money.

He disparaged what he sees as a people who’ve undertaken a political transformation in their country, merely to listen to artists who only started rapping when it became popular.

These new artists, he said, owe their success to a catchy beat more than an intelligent critique.

“There are those who rap for a year, or two, and then pop up on the scene suddenly because they made a stupid song, and [Tunisian] people memorize it immediately,” he fumed, sitting on the balcony overlooking Tunis. “But if you break your head working, writing deep images, it doesn’t do anything for you.”

For Nakazaki, remaining “underground” — free of social or political constraints on expression, paying no heed to commercial demands, and often remaining penniless — is the only way to leave a lasting impact on society. He said, “You come out with a hit song, and it sticks around for a couple months then dies. But the underground stays.”

But despite the efforts of those underground artists who make revolutionary music, Nakazaki said he sees little change in the daily lives of people inhabiting the densely-populated poor neighborhoods of Hay El Tadamon.

Asked if the newly elected government has made efforts to help those living in poverty in poor suburbs like his, he said, “people in the neighborhood have been thrown away.”

As the Asr prayer of the late afternoon drifted over the balcony from a nearby mosque, Nakazaki paused for a moment, whispering “Allahu Akbar.”

Because of continued poverty and political marginalization in neighborhoods like Hay El Tadamon, youth continue to demonstrate sporadically against the Tunisian authorities. Nakazaki said that the situation remains unstable in places like Hay El Tadamon and El Omrane, with police using gas and batons to repress protests.

“In Hay Tadamon, from the revolution until now they’ve been [protesting]. The news just doesn’t show it,” Nakazaki said. “It’s normal. We settle down for three of four days, then we go out in the streets again.”

Though the struggle to get by never gets easier, Nakazaki doesn’t plan on giving up rap. He and his co-artists from Zone 5, Med Big-M and Red B’m, rent a tiny recording studio in Hay El Tadamon, working whenever they can scrape together a little bit of money from their families or small-time concerts. They continue to commute to downtown Tunis to perform at open mic sessions at underground cafés like Whatever Saloon, built inside a massive warehouse.

Nakazaki says he tries not to overstate the potential of hip-hop for social change. He doesn’t think rap can uplift Tunisian youth all by itself. “It’s just music,” he said. “But it’s something to enjoy and with which to express oneself and empty one’s heart.”

For Nakazaki, rap functions more as a daily medicine. With rap, he said, “I write a verse. I have a good time. I burn off anger.” With it, he and his friends can cope for another day with life in Tunisia’s shadows.