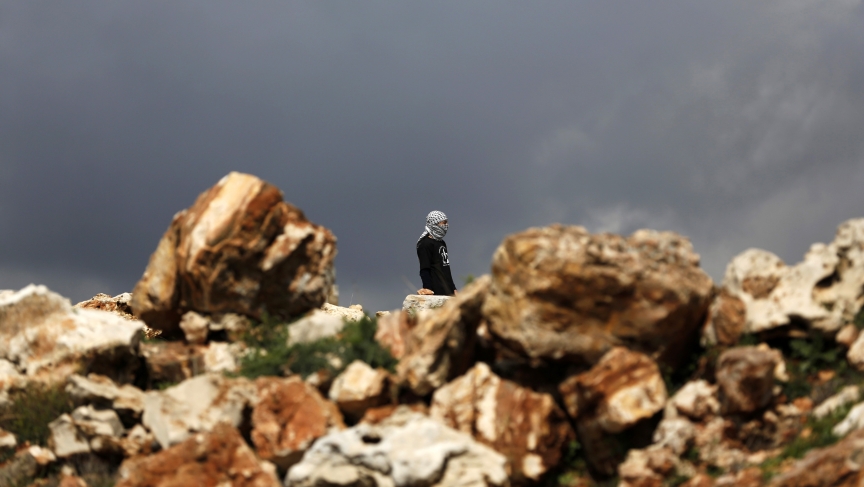 A stone-throwing Palestinian protester stands during clashes with Israeli troops at a weekly protest against Jewish settlements, in the West Bank village of Nabi Saleh, near Ramallah.

For young people growing up in the West Bank, the quickest form of protest is never more than an arm’s reach away. It’s the stone on the ground. When hurled at the opposing side, it is a tool of violence for both Israelis and Palestinians alike.

It’s also against the law. But that law is different depending on whether you are an Israeli citizen or a Palestinian, as reporter Daniel Estrin revealed and co-authored in an investigative report for the Associated Press.

“Israeli settlers are prosecuted under Israeli civilian law, but Palestinians, who live just a few minutes away from those Israeli settlers, are subject to a completely different set of laws — military laws and the military justice system,” Estrin said.

The Associated Press report followed two 15-year-old boys who lived near each other. They were accused of the same crime of stone-throwing just one day apart, but the outcomes were completely different.

For the Israeli teen, Estrin said that he was placed under house arrest and has since been freed, though his trial continues. The Palestinian teenager was arrested and jailed for nine months, for the same crime.

The act of stone-throwing can be dangerous, which is why it is treated as a crime. “Rock throwing may seem like, sort of kids play, but Israeli security officials say these rocks can kill,” Estrin said.

And both sides in the conflict use stones. “This tactic of stone-throwing has been adopted by particularly extremist Israeli settlers who also throw stones at Palestinians,” Estrin said. “In the West Bank, rocks are aplenty. It’s a very rocky terrain, and all you have to do to fight someone is to bend down and pick up a rock.”

In headlines and peace process talks, issues like stone throwing don’t come up, Estrin explained. “This is the sort of day-to-day friction and tension happening in the West Bank."

But he thinks the issue is much more important than it may seem. "The way that the justice system deals with kids who pick up a stone and throw a stone, it affects where these kids go and what they become, and I think that it’s something we have to pay a lot more attention to.”