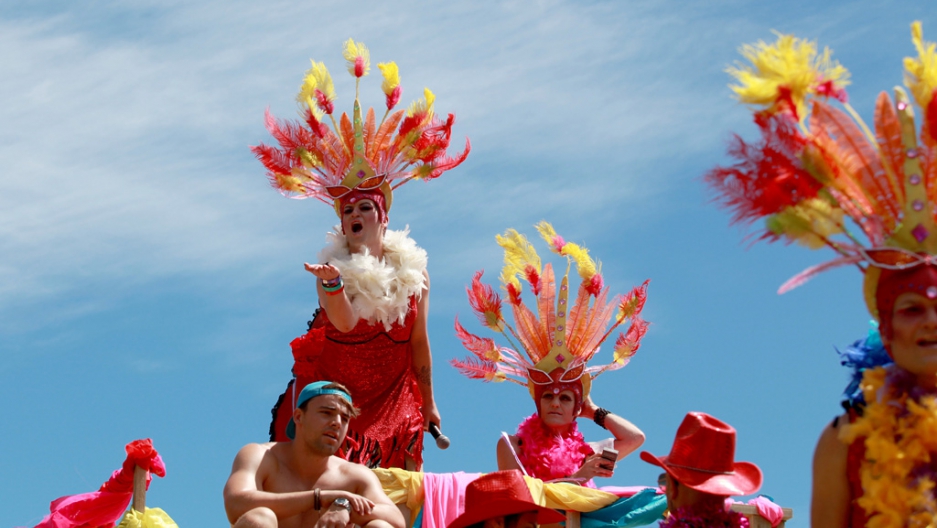 CAPE TOWN, South Africa — The barman at Café Manhattan is buff and shirtless as he mixes afternoon drinks for two men sitting together on bar stools topped with cowboy saddles. The cocktail list is long but the African Queen (crème de banana, triple sec and orange juice) is always popular.

On the sunny terrace outside most tables are occupied by men, some in couples, some in groups.

At the heart of Cape Town’s gay village Café Manhattan, on a corner of Waterkant Street, has for years been a mainstay of the city’s vibrant, thriving, visible and open gay scene.

No one here is hiding. Nearby are a diner called Beefcakes where pastel pink and white flamingo statues welcome punters, a long-running gay nightclub called Beaulah (“Where Cape Town’s fabulous gay community meet to party”) and the popular Amsterdam Action Bar, among other joints.

But Cape Town’s gay village doesn’t, wouldn’t, and couldn’t exist in any other country on this continent, the majority of which outlaw homosexuality. Some have seen a recent increase in penalties for homosexual acts. In these places gay people and other sexual minorities are forced into lives of secrecy and fear. Coming out is an act of bravery and defiance: Far more than social awkwardness is at stake.

Homosexuality is illegal in 36 out of 55 African countries and carries the death penalty in four. The presidents of Nigeria and Uganda recently passed new laws strengthening existing anti-gay legislation. A parliamentary caucus in Kenya is demanding anti-gay laws be applied rigorously and one MP recently said homosexuality is “as serious as terrorism.”

South Africa runs contrary to these currents. The country’s 1996 constitution prohibits discrimination on the grounds of sex, sexual orientation and gender. Pierre de Vos, a law professor at the University of Cape Town, says South Africa is different “because of the way in which it became a democracy.

“Equality was very important to some of those deeply involved in the struggle against apartheid and they successfully put the argument that the struggle is against the denial of dignity and against all discrimination,” said de Vos. “Part of the struggle was about human rights.”

Even so, South Africa is no paradise for lesbian, gay, bisexual, transgender, and intersex (LGBTI) people, as de Vos points out. His experience as “a privileged white middle class, gay man in Cape Town” is very different from that of, say, “a black, lesbian woman in a small town.”

Brutal “corrective rapes” of lesbian women and hate crimes against homosexual men, including beatings and killings, happen despite the legal protections of the constitution.

Nevertheless, South Africa is an outlier when it comes to the state’s efforts to protect sexual minorities from the kind of discrimination gaining traction elsewhere in Africa.

“The specter of colonialism and imperialism hangs over this,” said Desiree Lewis a feminist activist and head of the Department of Women and Gender Studies at the University of the Western Cape during a recent public discussion on sexuality and the law at a bookshop in Cape Town.

Colonial rulers first wrote most of Africa’s anti-gay laws more than half a century ago. Despite their rhetoric that holds homosexuality as “un-African,” today’s anti-gay lawmakers are defending, and strengthening, that colonial legacy, according to Lewis: The ideas of both the nuclear family and exclusive heterosexuality were “colonial constructs.”

“We must ask where does the homophobia come from?” said Lewis. She went on to blame recent Christian fundamentalism for “fueling a backlash against sexual rights and feminism.” American evangelicals have been linked to the formulation of Uganda’s anti-gay law, which included the death penalty in an early draft.

The uncomfortable truth for liberals of every persuasion is that the anti-gay laws in much of Africa are popular and to call for their tightening is a near-guaranteed vote-winner. Analysts have noted that the passing of the Nigeria and Uganda laws come ahead of presidents Goodluck Jonathan’s and Yoweri Museveni’s expected reelection campaigns for 2015 and 2016, respectively.

Such moves would be unlikely to gain support in South Africa, however. “Populist politicians would find it hard to make anti-gay arguments because the elite discourse in South Africa rejects homophobia,” said de Vos.

He argued that South Africa can play a role in countering the anti-gay movement in Africa by showing there is an alternative to repression. De Vos pointed to Archbishop Desmond Tutu, a respected church leader and anti-apartheid activist, who publicly criticized Uganda’s new anti-gay law by comparing it to apartheid South Africa and Nazi Germany.

“The history of people is littered with attempts to legislate against love or marriage across class, caste, and race,” Tutu said.