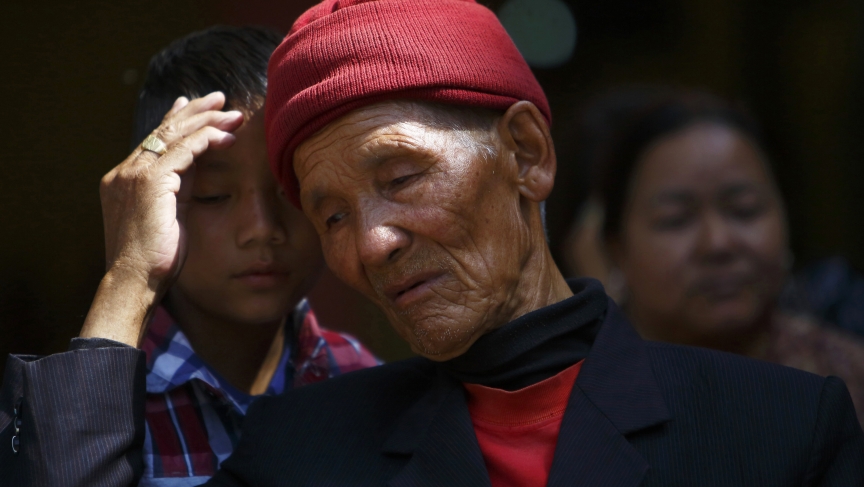 The father of Kaji Sherpa, one of 13 Nepali mountaineering guides who lost his life in an avalanche on Mount Everest, comforts his grandson as he waits for the body of his son to arrive at Sherpa Monastery in Kathmandu April 19, 2014.

The Sherpas — members of an ethnic group renowned for their skill at high-altitude climbing — are crucial to operations on Mount Everest. They earn $3,000 to $5,000 each two-to-three-month season, while putting their lives at great risk for affluent clients.

On Friday, an avalanche roared down a climbing route on the mountain, killing at least 13 Sherpa guides and leaving three others missing. When the avalanche occurred, the Sherpas, who have centuries of history in Nepal's alpine region, were working at just under 21,000 feet, fixing ropes and preparing the path ahead of peak mountaineering season.

As the Sherpa community mourns family members and friends lost in the accident, the group is considering an unprecedented move: a strike.

On Sunday, disappointed by the Nepali government’s offer of 40,000 rupees (about $408) as compensation for the families of the dead, some Sherpas gathered at Everest’s base camp to propose a “work stoppage” that could disrupt or cancel the 334 expeditions planned for the 2014 climbing season.

"I think just the magnitude of the loss of life from Friday's accident has prompted very unusual decisions," she says.

Barry says climbers have depended on Sherpas for more than half a century, since Sir Edmund Hillary became the first person to reach the top of the world's highest peak in 1953. The Sherpas have traditionally served as guides, but their role has evolved over time.

"Increasingly, they serve perhaps more as workhorses — carrying gear up from the base camp up to the camps up the mountain," she says. "I think the vast majority of those Sherpas working on the mountain this season are carrying loads or fixing lines. The Sherpas who died on Friday were carrying loads."

While the avalanche showed the risks of the profession, Barry says the potential work stoppage may be more about ongoing negotiations between the Sherpas and the Nepali government over issues of compensation, insurance, and distribution of income generated from expeditions, which can bring in millions of dollars of profits.

"Some Sherpa organizations have made specific demands for hiking the level of compensation to a little bit more than double what the government is offering now," she says. "It's a very powerful, emotional moment."

Barry says that the deaths of the Sherpas have caused some to rethink their expeditions. The Discovery Channel had been planning to air a live jump off the summit of Mount Everest on May 11, but announced it would cancel the jump as a sign of respect to the families of the fallen Sherpas.

"The sum costs — economic and psychological — of canceling an expedition are really quite staggering," she adds.