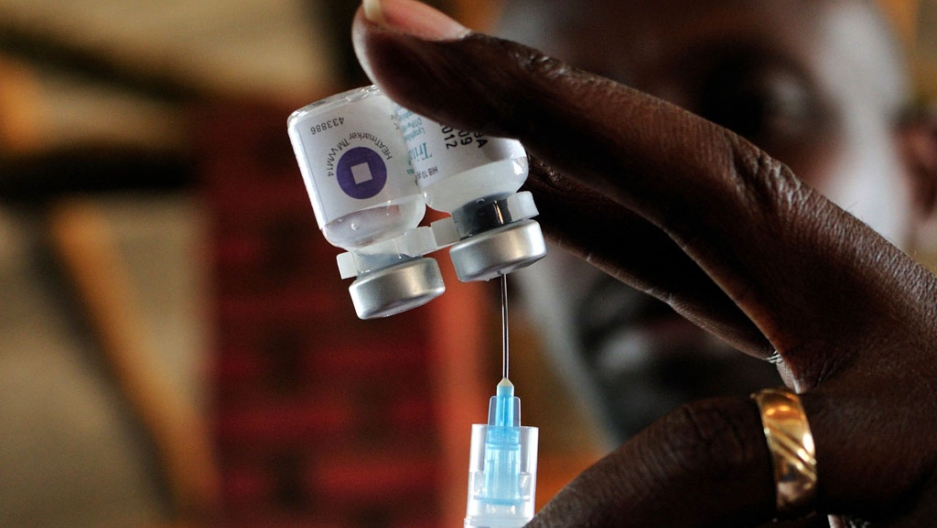 A syringe is filled with a vaccination prior to be delivered in Rwamagana district.
Credit: Shannon Jensen
Share

The rapid recovery of healthcare in Rwanda since the 1994 genocide has been nothing short of historic. Life expectancy has doubled. Child mortality has fallen by more than two-thirds since 2000. In the past decade, death rates from AIDS and tuberculosis have declined at record speed. Vaccination rates for many diseases surpass those reported in the United States. And Rwanda is on track to become the first African country to achieve the Millennium Development Goals for health.

Partners in Health co-founder Paul Farmer reflects on the lessons of Rwanda’s remarkable turnaround since the country's genocide 20 years ago.

GlobalPost: What can other governments and the development community learn from Rwanda's success story?

Paul Farmer: With this kind of reduction in mortality, one of the first lessons is that we must try to learn the lessons — most of the time we don’t even bother. This is more easily said than done, since improvement of this magnitude, like sudden and catastrophic failure, inevitably generates discrepant claims of causality. That is, “success has many mothers,” just as failure has difficulty establishing paternity. Three more lessons might be the following:

First, focusing on the burden of disease, especially among the poor and vulnerable, and the gaps in attention to it, is a great way to respond to past and current failure. If you were in Rwanda in 2004, as we were lucky enough to be, you’d see that the programs to respond to AIDS, tuberculosis, and malaria were quite weak. According to one estimate, just $14 per capita was being spent on healthcare that year (though such studies can fail to capture out-of-pocket expenditures by families seeking care for catastrophic illness). In 2004 and 2005, deaths from malaria reached their peak in Rwanda’s recent history.

The “burden and gap” approach — among the rural poor in this case — taken since then by the public sector and its partners offers some real programmatic examples of the implications of an “equity agenda.” Deaths from AIDS and tuberculosis have fallen more rapidly in Rwanda than just about anywhere, ever. Child mortality has fallen three times faster in rural areas than in cities, and disparities in child survival between the wealthiest and poorest Rwandans have shrunk.

Another lesson is the foundational importance of integrating prevention and care, as well as the risks of failing to do so. There’s a cost to failing to integrate in general, and in the middle of these epidemics, you can’t make that mistake.

Finally, there’s a great deal of synergy in public-private collaborations. Bypassing the public sector is a big mistake that non-governmental organizations have made in many other post-conflict settings. This has been one of the problems in Haiti in the past couple of decades. It makes a real difference to have NGOs and other partners work with the public sector — the guarantor of long-term investments and the possibility of universal access to health care.

GP: What has surprised or moved you the most about Rwanda's progression?

PF: I’m not surprised by the results, but rather by the rapidity with which they have been registered. When you roll out integrated prevention and care for malaria, you get less malaria — say, fewer people dying. But until the last couple of decades of the twentieth century, we didn’t have effective tools to address burden and gap. What we’d seen until recently were either failures to deliver or failures to understand links between policy declarations and seeing delivery actually happen. It makes all the sense in the world that you’ll see rapid results with national scale-up efforts, especially when they are founded on community-based service delivery (the primary delivery mechanism here, after all, is not physicians or even nurses, but community health workers).

Just as failure and suffering can move people, so too can a turnaround and improvement. Although the Rwandan health authorities would be among the first to tell you they have a long way to go, it’s moving to me that they’ve come a long way, against great odds and at a rapid pace. It’s easy to talk about the right to health care, or even the right to health, but a lot less easy to get the job done. This requires some meaningful connection between national and district-level policies for good, and means of getting them delivered at the level of a village.

GP: What role has foreign aid played in Rwanda’s achievements?

PF: According to some lucid analyses, such as that by Peter Uvin in his 1996 book Aiding Violence, foreign aid played a large and noxious role in setting the stage for what came to pass in 1994.

Of course, foreign aid is a very general term, but if you look at what happened in the years immediately after the genocide, you’ll see that, compared to neighboring countries, Rwanda received less formal “overseas development assistance.” This shocking juxtaposition has led some to conclude that foreign aid could not contribute positively to Rwanda’s turnaround, and that is also false.

If you look at both The Global Fund for AIDS, Tuberculosis, and Malaria and the US President’s Emergency Plan for AIDS Relief (the largest bilateral program involved in Rwanda), you’ll see that both institutions played meaningful and positive roles, as did many other partners in contributing to Rwanda’s turnaround. The question is not whether or not foreign aid helped, but rather how much and how.

GP: Investing in the public healthcare system and an equity-based framework have been key in Rwanda. What is your perspective on the increasing shift toward public-private partnerships in global health?

PF: Well, my perspective is not an ideological one. What I mean is that these are empirical questions above all. If I have a bias, though, it would be toward making sure that a strong public sector can channel and coordinate private contributions and enthusiasms, and regulate them so that the quality of care or preventive services is high. Another is that private sector contributions should not replace or crowd out public investments in health and healthcare — which are, as noted earlier, two different things. If the goal is health equity, then there is ample room for private and public contributions to add up to more than the sum of their parts. It’s not private versus public, but rather that a public sector backbone is essential for ensuring equitable service delivery, regulation of quality, and insurance against catastrophic illness. Across the world, catastrophic illness remains the leading cause of destitution —we need strong insurance programs that cover the poorest. The private sector is not going to be able to do that alone.

GP: What will be required for Rwanda to sustain its gains in the future?

PF: The first thing that comes to mind for me is that Rwanda needs to grow economically to sustain these gains and continue to invest public dollars in health care. There will be plenty of room for more accompaniment from good-willed partners and the NGO community. The idea that groups can come in for a decade and then say, “that’s plenty,”—that doesn’t sound much like real partnership. A long-term investment is not measured in a few years. Public investments have to grow; the economy must grow, and there must be a meaningful system to allow public tax money to support the public health system. It is the national plan of Rwanda, through its Vision 2020 plan, not to need such external inputs beyond the year 2020. The question of when those two lines cross is up in the air, and I would hope that Rwanda’s partners are committed to being there as long as it takes. That’s what accompaniment is all about.