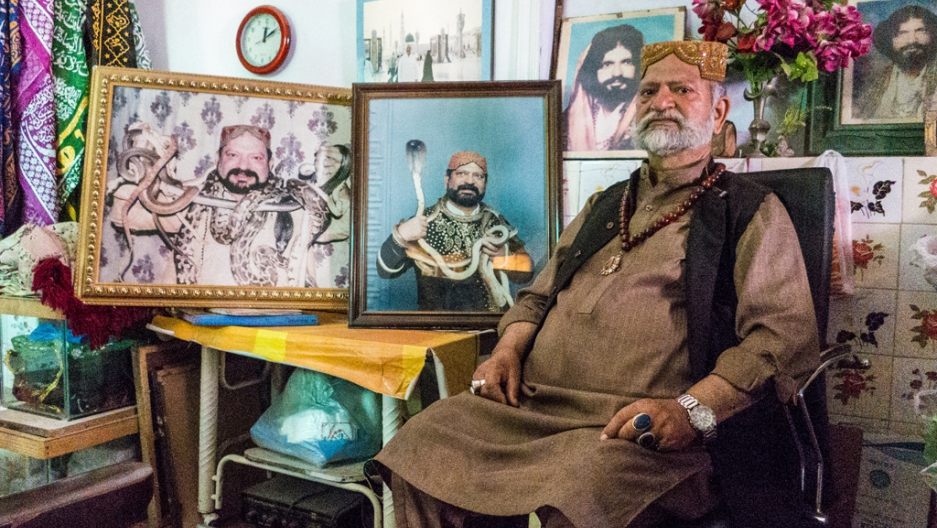 To get to Shah’s office we travel down a narrow back alley in a residential area on the edge of Lahore. Shah sits inside, his hands covered in oversized rings, surrounded by a sea of terrariums and large, colored portraits showing him holding snakes, scorpions, and an owl — its wings outstretched and its round eyes glaring at the camera.

Shah fashions himself as a Pir, or a living saint — figures that play an important role in some branches of Islam. The Pirs are considered to be closer to God than the average human, and can offer guidance and help to other believers by praying for them in a time of need. The title is passed down from generation to generation, and many Pirs are also part of the large land-owning families that control huge swaths of rural Pakistan.

Shah uses the honorific title 'Syed' before his name, which means that he claims to be a direct descendent of the Prophet. Wearing a Muslim prayer cap and a beard — commonly associated with the pious — Shah says he offers spiritual guidance and healing to the poor, lost and ill.

As in other parts of South Asia and many Middle Eastern countries, the penchant for faith healers and black magic is deeply embedded in Pakistani society, despite Islam’s injunction against magic. From rich landlords to the menial workers who eke out a living in the backstreets of the country's cities, Pakistanis routinely turn to spiritual healers to cure ailments from cancer to epilepsy, to seek guidance on marriage, or even to deal with overly talkative daughters-in-law. Superstition abounds: It's bad luck to start a business on a Tuesday; breaking a glass is good luck; and doing housework in the evening will help ward off evil nighttime spirits.

“The magic exists, these evil spirits exist. There is no conflict [with these beliefs] in Islam,” explained Pir Syed Nisar Ashraf, when I visited him before heading to see Shah. Deep within the walled old city of Lahore, Ashraf runs a mosque that is named after his grandfather, also a Pir.

But Ashraf distinguishes between believing in magic and practicing it: “There are two treatments for all problems,” he says, “The spiritually pure one and black magic.” He explains that he often hears stories of men and women being exploited by fake Pirs who practice black magic.

“Women often go to people who practice black magic. They [the healer] say the problem is because of the mother-in-law or daughter-in-law, and they promote conflict between people. Black magic harms people, though it is effective,” he says.

Standing in Shah’s office, I recall Ashraf’s scornful words about fake Pirs and black magic. I enquire about the snakes in the pictures — unusual for a religious man to have on hand. He beckons me into a dark room just off his office. From under the desk he produces a small pink plastic basket and whips the lid off with a flourish.

Inside are three snakes. A black cobra unwinds itself from around a small clutch of eggs and rises menacingly from the basket. Shah picks up one of the other snakes and pops its head into his mouth. He then repeats the trick as I recoil. "Very poisonous," he says with a wide smile that reveals his red teeth, stained from years of chewing pan — a preparation of betel leaf, areca nut, and sometimes tobacco.

Shah says that the snakes don't take part in any of his remedies. He says he just instructs people to read Quranic verses. Mushtaq, my guide, says that he's seen Shah write the name of a man's enemy on a piece of paper and feed it to one of the snakes. Mushtaq says Shah then instructed the man seeking to dispose of his enemy to throw the snake in the canal. "Your enemy will drown when the snake returns to me," Shah allegedly said.

I meet two of Shah's regular customers on the way out. One tells me that he first came to Shah because his son was struggling to get the money and necessary documents to immigrate to the United States. After visiting Shah, the man suddenly received a check for 100,000 rupees, which he used to pay for his son's US visa. His son now lives in Maryland. The other says that Shah helped him marry the woman of his choice and then helped them have children. Shah also intervened when his business was going badly.

If Shah does stray beyond pure prayer, Ashraf, back at the mosque, does as well. In addition to encouraging members of his congregation to pray, Ashraf does numerology, calculating a complicated series of numbers using the names of the complainant, their date of birth and time of day. Sometimes Quranic verses are added in. The numbers are then written on a piece of paper called a naqsh, and worn around the neck in an amulet, known as a taveez.

Ashraf also encourages some of his congregation to release birds. “If a person is not in a good peace of mind spiritually, you release a bird. You give life [to the bird] and that brings peace. There is logic in this matter,” he said in a matter-of-fact way.

In the markets dotted around Lahore, and sometimes at the intersections on the roads, you can find the bird sellers. They sell birds of all different shapes and sizes, which they say help bring blessings for different things. Sheik Shahid, who has been selling birds for 25 years, says that people sometimes come to him with very specific requests, like an all black hen or a pair of mating doves.

“It is what the Pirs have told them to get. We don’t usually ask why, we just try to fulfill the request,” he said with a shrug.

Along the main road leaving the eastern section of Lahore, I encounter another superstition involving birds. Men stand at the roadside with small bags of meat. Drivers stop and buy a bag as their cars leave the city. Feeding the birds circling overhead — mostly crows and kites — is meant to offer protection to the driver and passengers as they set out on a journey.

“If you do good to the birds they will do good for you,” explains Muhammad Khalid, one of the meat sellers. “But these are all superstitions and have little basis in Islam,” he adds, explaining that only some people ask him to recite an Islamic prayer before he throws the meat to the birds.

Unfortunately, the sight of a foreign woman standing on the side of a road seeking the birds' blessings attracts a small crowd. When my bags of meat are emptied onto the grass, the birds don’t come. I ask Khalid if that means I won’t get my good fortune. He assures me that my 20 rupees will have the requisite effect.