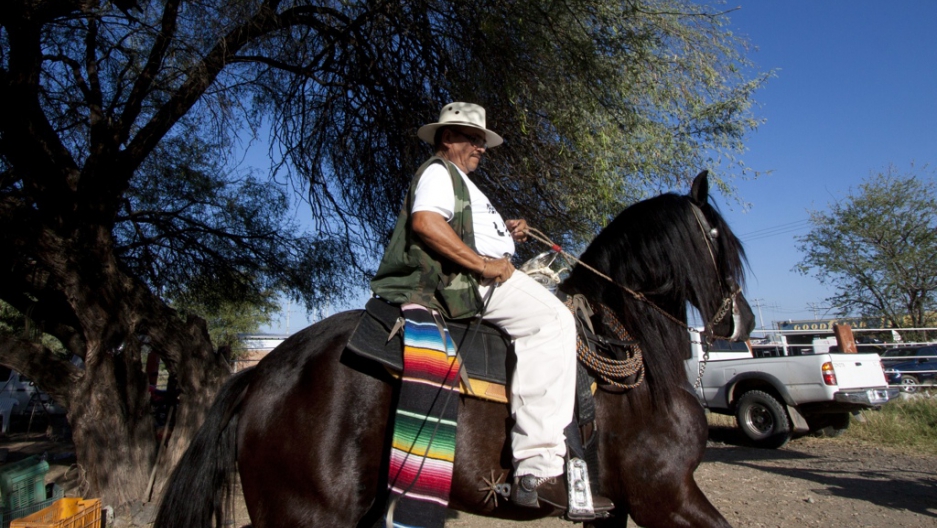 MEXICO CITY — The rise of thousands of vigilantes bearing assault rifles to rout a drug cartel in western Mexico’s Michoacan state has presented the administration of President Enrique Peña Nieto with a policy nightmare.

Attacking the vigilantes is unpopular and morally questionable. But tolerating these gun-wielding militias, who are manning checkpoints, detaining suspects and swarming on towns, shows a breakdown of the basic rule of law.

However, the government and vigilantes may have found a way out of this conundrum.

Late Monday, Peña Nieto’s envoy and a council of vigilante leaders made an agreement in which a new state police force could incorporate militias, others could be demobilized and many imprisoned vigilantes may be released. Vigilante chiefs would also be given protection to avoid revenge attacks by disgruntled gangsters.

Experts hailed it as the most significant political solution so far to Mexico’s new wave of vigilantism.

The agreement came amid heightening tensions. In recent weeks, police and soldiers arrested dozens of vigilantes for crimes including murder. In reaction, Mireles — a medical doctor turned vigilante — threatened to blockade roads throughout the state unless prisoners were released.

However, it also comes as the vigilante militias and federal forces have worked side by side to crush a common enemy: the brutal Knights Templar drug cartel, accused of terrorizing Michoacan villagers and controlling crystal meth and illicit iron ore smuggling routes across the region.

Mexican marines shot dead the Templar boss Nazario “The Craziest One” Moreno on March 9 while soldiers killed his sadistic lieutenant, Enrique Plancarte, at the end of the month.

These takedowns were possible after the vigilantes had taken the bastion towns of the Knights Templar, decimating the cartel’s rackets and forcing its leaders to go on the lam.

The deal has its pitfalls. New arrests or violence could easily derail it. The Knights Templar is down but not totally out. Vigilante leader Mireles and the federal government commissioner Alfredo Castillo vary on their interpretations of the agreement.

Here's a look at the main points of the pact and what they mean.

The police force, which will be created by May 10, is the key to a political solution. It could allow the vigilantes to maintain security to stop the Knights Templar cartel from returning, and to wear uniforms to undo the specter of ragged civilians with Kalashnikovs manning roadblocks. This is markedly different from a previous idea of making vigilantes into volunteer members of the army’s rural corps, which failed because most militia members did not meet the requirements. The new state force could make its own rules to fit the circumstances.

Security analyst Alejandro Hope said the force is the most realistic proposal to rein in the vigilantes. “It is an institutional solution that could work,” he said. “But there are concerns, like how you would stop the new force from falling into the same vices as previous police forces.”

The state’s monopoly on the control of guns in Michoacan is crucial in re-establishing the rule of law. However, there are varying interpretations of what this could mean. Mireles said in an interview on MVS radio Tuesday that vigilantes would hand in heavy weaponry such as grenade launchers and .50-caliber rifles. However, most vigilantes have Kalashnikovs, and Mexico bans the use of the AK-47 by both police and civilians.

More than 100 vigilante prisoners from Michoacan are held in state and federal prisons around Mexico. The government said in a statement that those who are being held on firearm charges would be moved to a low-security prison in Michoacan, close to their families. However, Mireles said they have been promised that most vigilante prisoners would be released, no matter what the charges.

The government promised to protect vigilante leaders, whom the Knights Templar has vowed to kill. This is an important point for figures such as Mireles (above) who have put themselves in the firing line. But it’s potentially problematic. The Mexican government often fails to protect its own police officers and politicians from gangster assassins.

5) Finishing off the Knights Templar

The vigilante militias formed because of the way the Knights Templar drug cartel preyed on the community, accusing the gang of shaking down businesses and committing wanton rape and murder. Mireles says the cartel has now been decimated in 30 municipalities occupied by self-defense squads. But the vigilantes want to clean the gangsters out of all 113 municipalities in Michoacan. They also want to see the capture or killing of the remaining leaders such as Servando “La Tuta” Gomez. This last point is particularly problematic as there could be much debate as to when the Knights Templar can be officially declared kaput.