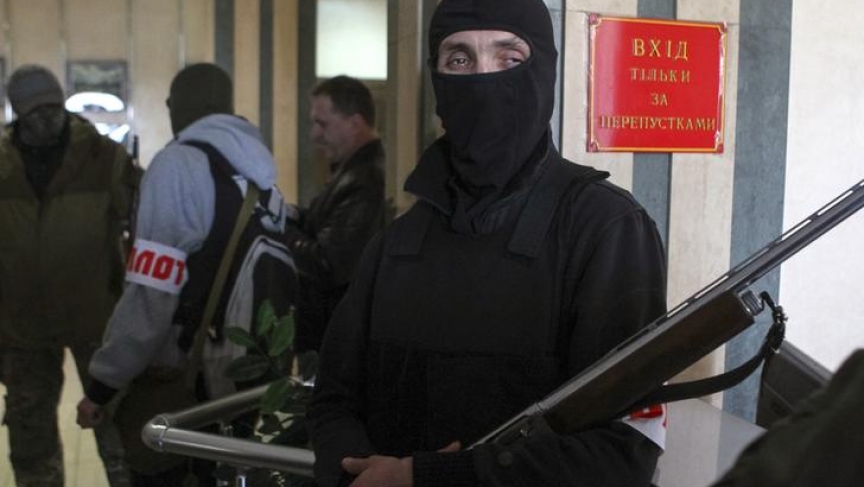 Pro-Russian armed men stand guard inside the mayor's office in Donetsk April 16, 2014. Dozens of masked pro-Russian separatists armed with Kalashnikov assault rifles have seized control of the city hall in the eastern Ukraine city of Donetsk demanding a referendum, a local government spokesman said on Tuesday.

Tensions in eastern Ukraine are high as Ukrainian troops have deployed to recapture areas seized by pro-Russian separatists, but the separatists remain defiant.

In the city of Donetsk, local activists armed with  Kalashnikov assault rifles took over of the mayor's office.

The BBC's David Stern says men in ski masks with weapons "haven't so much seized the building, they've occupied it. People are allowed to go in and out of the building at will at least if they work there, and the city council is allowed to meet. But, obviously any time you have men with ski masks on the first floor, that's not a normal work day."

The occupiers are members of a pro-Russian athletic "fight club" from Kharkiv called Oplot according to Stern.

The head of the group, Oleksandr Zakharchenko, told journalists that the goal of their entry to the building was to ensure that Kiev authorities agree to holding a referendum on the territorial status of Donetsk Region on May 11.

Zakharchenko says they will remain there until a referendum on the political status of the eastern region of Ukraine is put on the schedule.

"Our main aim is to send a message to Ukraine's parliament demanding that a law is passed about local referendums," Zakharchenko says. "We also demand that the city council helps to organize a local referendum on May 11 about the self-determination of the Donetsk region."

Despite the tense standoff, Stern says most residents of Donetsk are going about business as usual.

"I look out on the street and people are waiting for buses, walking up and down doing their shopping, going to work. This is an industrial part of the country, you have miners going into the mines. But there is a definite tension in the air, regardless of what side of the political divide they're on, they are extremely worried that this could end up being a conflict that either become even larger and engulfs the eastern part of Ukraine if not Ukraine altogether."

The Ukrainian defense minister was in the region Wednesday to check on the progress of the military operation.

That statement by Ukraine's prime minister says Stern, “reflects real panic or concern about what these standoffs could lead to. It's difficult to say at this point whether the Ukrainian military or the pro-Russian activists have the upper hand at the moment the Ukrainian troops are being extremely careful because they say they don't want to create any unnecessary casualties but at the same time they are in a difficult position because they are constantly being surrounded by civilians who are trying to prevent their movement."

It’s a very fluid situation with a  great deal of activity. Stern says "it seems that the situation is moving, possibly further toward a more direct confrontation. Even though we don't have full out fighting and shots being fired, it needs to be said that it could happen at any moment."