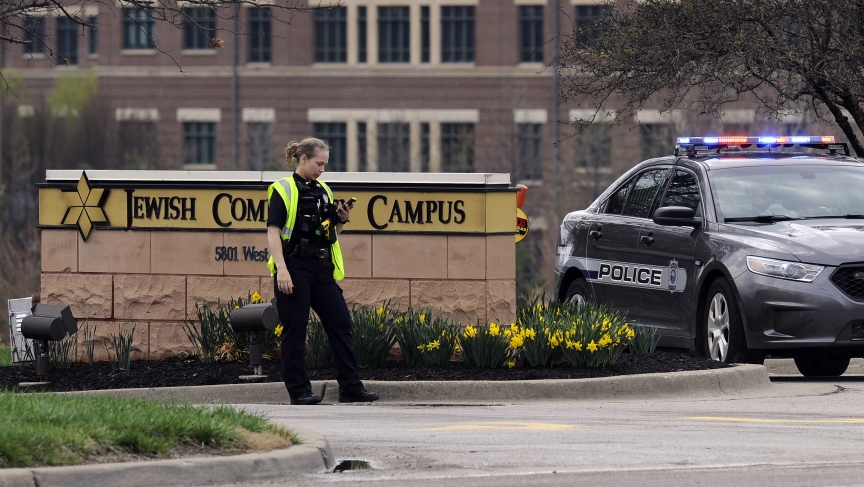 An Overland Park, Kansas, police officer guards the entrance to the scene of a shooting at the Jewish Community Center of Greater Kansas City in Overland Park, Kansas April 13, 2014. Three people were killed in shootings at Jewish centers in Kansas on Sunday and a suspect was in custody, according to police and local media.

Jews around the world are preparing for the important Passover holiday — but the festivities in Kansas will have an especially somber tone, after three people were killed Sunday outside a Jewish community center and retirement community in a suburb of Kansas City.

The gunman was identified as Frazier Glenn Miller, a man FBI officials have said they were previously "aware of" and who has previously been associated with neo-Nazi groups and the Ku Klux Klan. He's been jailecd pending charges on suspicion of first-degree murder as a hate crime. Glenn Miller, who also goes by the alias Frazier Glenn Cross, has a history of anti-semitism.

Mark Potok, a spokesman for the Southern Poverty Law Center (SPLC), says the attack comes as no surprise to his organization.

"We have tangled with this man over the last 30 years, repeatedly," says Potok. "Back in the mid-1980s he actually plotted to assassinate the founder of the SPLC, Morris Dees. He at the time was running a kind of paramilitary Klan outfit called the White Patriot Party — they were Klansman but trained with weapons. It turned out they were getting both training and military weapons from active military personnel."

Officials identified the dead as 14-year-old Reat Griffin Underwood, his grandfather, William Lewis Corporon, and 53-year-old Terri LaManno, who was visiting her mother at the retirement home. Though law enforcement said they planned to pursue the case as a hate crime, because it targeted the Kansas City Jewish community, none of the deceased were Jewish. Corporon and his grandson were Methodist, LeManno was Catholic.

While this tragedy has undoubtedly been a shock for the Kansas Jewish community, and the community at large, Potok says there has been an active white supremacist movement in the state over the last few decades.

"The reality is that most synagogues and Jewish institutions in the country have fairly elaborate security," he says. "The sad thing is it's really necessary."

Potok describes Glenn Miller as a neo-Nazi who "sees Jews as the real evil out there, much worse than black people, brown people, gay people and so on. What I would say defines him more than most people in this movement is this is a violent man with violent ideas."

According to Potok, Glenn Miller served two tours in Vietnam and spent 13 years in US Army special forces.

"This is a scary fellow, a guy who's been around weapons for much of his life and who clearly enjoys using them," Potok says.

The Southern Poverty Law Center sued Glenn Miller back in the 1980s. Glenn Miller agreed to shut down the group he was operating. He also pleaded guilty to a weapons charge.

"But then he went on the lam and it took some six or seven months before he was in fact caught again by the FBI and ultimately sentenced to prison," Potok says. "He probably would still be in prison today were it not for the fact that at the time he cut a deal with the federal government to inform, to testify against other white supremacists in the very famous 1986 sedition trial in Fort Smith."

Potok says the government ultimately lost the case in the 1980s and Glenn Miller was let go.

“Nobody should have to worry about their security while gathering with their fellow believers,” President Barack Obama said in response to the shooting. “No one should ever have to fear for their safety when they go to pray.”