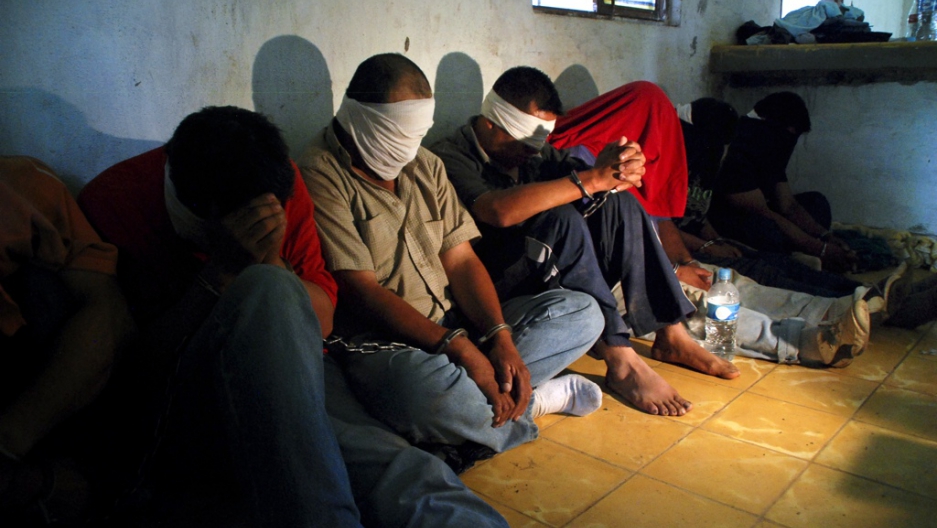 Mexican soldiers discovered this group kidnapped by alleged drug traffickers in 2010. Sixteen people, including a woman and a 2-year-old girl, were rescued during the operation.
Credit: Dario Leon
Share

CUERNAVACA, Mexico — Once the plutocrats' plague, kidnapping for ransom in Mexico has gone decidedly mass market.

Shopkeepers and family physicians, carpenters and taxi drivers: All have been targeted in recent years as minions of young criminals enter a trade long run by guerrillas and gangland bosses. That puts Mexico, along with Colombia and Venezuela, among the world's most kidnap-prone countries.

President Enrique Peña Nieto, 16 months into a six-year term, has struggled to meet his promises to dramatically lessen the crime. Both abductions and extortion continue to soar even as his government’s campaign against crime syndicates impacts drug profits and gang discipline weakens as kingpins are killed or captured.

Many wealthy Mexicans have long hired bodyguards and taken other security precautions, making them harder to get. The typical profile of kidnappers, meanwhile, is becoming younger and less sophisticated — more willing to favor quick paydays over substantial ones.

That’s making Mexico’s middle class, and even the working poor, the criminals’ targets of choice.

Ransom demands here in Morelos, a small state just south of the capital Mexico City that by some counts tops the nation in kidnappings, have ranged from $13,000 to as low as $250, according to the state police. At such prices just about anyone can afford to be snatched.

“If there’s anything democratic in Morelos, it’s kidnapping,” says Gerardo Becerra, 56, a businessman who is leading a citizens’ anti-crime protest movement in Cuernavaca, the state capital once revered for its eternal spring-like weather and now known for insecurity. “It hits everyone equally.”

Becerra’s group is demanding the resignation of Gov. Graco Ramirez, who took office 18 months ago after campaigning on a vow to attack crime, particularly kidnapping. The group hopes to force a recall election in the fall, which if successful, would be Mexico’s first such removal of a governor by popular vote.

Some 1,700 kidnappings were reported across Mexico in 2013, nearly 10 percent of them in Morelos. Another 278 abductions were reported nationwide and 34 in Morelos in the first two months of this year, according to the government.

Analysts say as few as 1 in 5 abductions are ever reported, in part because victims’ families fear police agents are involved with the gangs.

Trust is particularly scarce in Morelos, which in the past three decades has been used as the base for a succession of Mexico’s more powerful crime lords. A chief of the state’s anti-kidnapping squad was arrested for leading a kidnapping ring in the late 1990s.

“People feel they are living in lawless communities,” says Adriana Pineda, 39, the new chief of Morelos’ 60-member anti-kidnapping squad, which is partly funded by the US Agency for International Development and trained by the FBI and police from Colombia, Israel and elsewhere.

“How do you build confidence?” she asks.

A former state prosecutor who worked for Mexico’s equivalent of the CIA before returning to Morelos, Pineda says she focuses on instilling professional pride among her unit’s detectives, whose pay starts at less than $600 a month. Pineda deals with victims’ families directly, she says, because of the low public confidence in her agents.

Investigations and ransom negotiations frequently become complicated because victims are targeted by family members and acquaintances, Pineda says. Victims in such cases often are killed because they can identify their captors.

Relatives in December paid ransom consisting of about $4,000, and work tools, for a young carpenter kidnapped after being lured by a request for a construction estimate. The man’s teenage abductors killed him anyway.

At least seven people were kidnapped last December, and six of them murdered, in Yautepec, a farming center about 20 miles from Cuernavaca that’s expanding quickly with new middle-class neighborhoods and the weekend homes of Mexico City families. Another 20 people were abducted in the community in the first two months of this year.

“Those in the small towns know who the criminals are but are afraid to say anything,” Pineda says. “No one reports them.”

While kidnappings are hitting particularly hard now, Morelos has been wracked by organized crime for decades. The Beltran Leyva crime family made Cuernavaca its base a decade ago. After marines killed family patriarch Arturo in the city in late 2009, his lieutenants destroyed one another in a bloody war to take over from him.

Today, the remnants of those lieutenants’ gangs carry out many of the kidnappings, joined by newcomers who trade low-wage jobs for easier criminal profits.

Becerra’s group claims that Gov. Ramirez and his police have failed miserably — either from “stupidity or complicity” in their efforts to end the crime wave and must go.

Ramirez, who is the state’s first governor from the leftist Democratic Revolution Party, says the complaints are politically motivated. He argues that he inherited the crime plague from predecessors who cut deals with gang bosses, giving them free rein.

The governor argues that his revamped state police forces have reduced kidnapping and other crimes in the past two months.

“I assume my responsibility,” Ramirez said. “I am going to defeat kidnapping.”