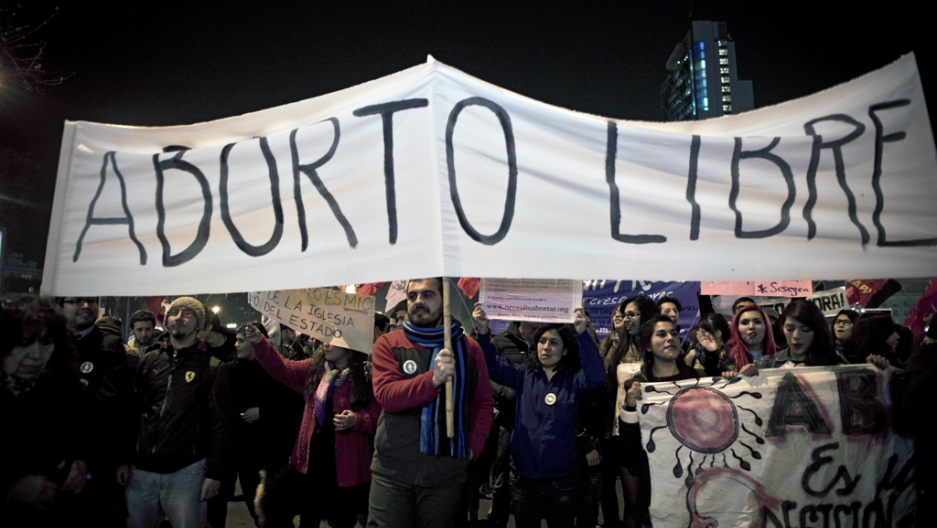 LIMA, Peru — When doctors told Karen Espindola three months into her pregnancy that her son had a brain defect, her initial reaction was searing grief.

But even as she sobbed in the hospital waiting room — surrounded by other expecting moms anxiously looking forward to giving birth — she decided to press ahead with the pregnancy.

A 23-year-old call center worker, whose partner had abandoned her upon hearing she was pregnant, Espindola resolved to love her son regardless of whether he had Down’s syndrome or some other genetic condition.

Oswaldo, her son, had been diagnosed with holoprosencephaly, a rare brain condition that would leave him severely physically disabled and with a life expectancy that would run to early childhood at most.

It was only at that point that she decided to enquire about getting an abortion.

What she learned devastated her. Chile is one of just six nations in the world, according to the Center for Reproductive Rights in New York, which have blanket bans on abortion, permitting them in no circumstances, even if the mother is at the point of death.

Those six countries are the tiny Mediterranean island state of Malta plus five from Latin America: Chile, El Salvador, Honduras, Nicaragua and the Dominican Republic.

That may be about to change. Michelle Bachelet, a socialist pediatrician who recently won re-election as Chile’s president after four years running the United Nations Women initiative, has vowed to revise the national abortion ban imposed by General Augusto Pinochet in 1989 in one of his last acts as dictator.

Her campaign program (page 169) promised the “decriminalization of the voluntary interruption of pregnancy in cases of danger to the mother’s life, rape or an unviable fetus.”

That may be all conservative Chilean society — divorce only became legal in 2005 — will accept at the moment, believes Claudia Dides, head of local group Miles, the Spanish acronym for the Movement for the Legal Interruption of Pregnancy.

“It is a first step. These three causes are the most basic, but there is still no acceptance of a woman’s right to choose regarding her own body,” Dides says.

“Chilean society still needs to have the debate about allowing abortion more widely. To a developed country it might seem like we are still in the Stone Age but this is our reality.”

Either way, the news comes too late for Espindola.

Oswaldo died in 2011, after two years of suffering with a laundry list of nasty health conditions, including quadriplegia, microcephaly, epilepsy, hormonal problems, and chronic malnutrition.

Throughout his short life, Espindola says, Chile’s health care system failed him. Private insurance was no help as Oswaldo’s conditions were all “pre-existing,” while he faced long waits for treatment in the country’s creaking public health network.

Espindola remains too traumatized to talk about her experience. But by email she told GlobalPost that she expected Bachelet to fulfill her promise to overturn Chile’s abortion ban, writing: “There is no excuse.”

She added: “Each and every day that passes without the decriminalization of abortion in these cases represents one more day of abuses and torture against Chilean women who, at any moment, can find themselves caught up in one of these tragic situations.”

Espindola also now appears to have Chilean society on her side. According to a 2008 survey on women’s rights and living conditions (see page 58), 68 percent of Chileans favor allowing abortion when the mother’s life is in danger.

Yet lifting the abortion ban may not be straightforward.

Bachelet’s ruling coalition has a shaky majority in both houses of congress, with 21 of 38 senators and 67 of 120 members of the lower house. They’re drawn from six different parties, spanning from the Communists to the center-right Christian Democrats. Few, including Dides, dare predict which way any vote will go.

Crucially, the Catholic Church and, increasingly, evangelicals, hold huge political sway in Latin America, where many politicians even on the left — including the populist presidents of Bolivia, Ecuador and Nicaragua — oppose abortion.

That means some members of the coalition, even those on the far left, might vote against the reform.

Meanwhile, the socially conservative opposition lawmakers are expected to fight tooth and nail to keep the ban.

GlobalPost repeatedly sought comment from three opposition senators opposed to abortion, but their staff said they were unavailable. But Sen. Alberto Espina neatly summed up their position during the 2012 debate about a previous attempt, which failed, to reform the abortion law.

He argued that regardless of the circumstances, including the health of the fetus, terminating a pregnancy is wrong. “In whatever condition, children yet to be born are not ours. They are human beings, with rights that must be protected. I opt for the right of the baby due to be born,” Espina said.

Although many Latin American countries do — at least in theory — allow abortion in limited circumstances such as those Bachelet proposed, many women in the region cannot access safe, legal terminations.

According to the Guttmacher Institute, a US nonprofit research group that supports reproductive rights, 95 percent of the 4.4 million terminations carried out in the region in 2008 were unsafe. In other words, they were backstreet abortions often by people without any medical qualifications.

Meanwhile, about 1 million women a year in Latin America need hospital treatment as a result of underground abortions gone wrong, which account for 12 percent of all maternal deaths.
Many of them are poor. Wealthier women wanting an abortion can, sometimes, hire doctors to carry out illegal but safe terminations or travel abroad.

Yet the pro-abortion camp is making progress.

Uruguay and Mexico City now permit abortions on demand in the first trimester, while Argentina allows them in rape cases. Colombia in 2006 lifted its blanket ban to allow abortions in cases of rape, incest, risk to the mother’s life and where the fetus would be unviable after birth. Brazil now allows terminations in cases of brain abnormalities.

Until Chile follows the same path as Colombia, Dides expects more horror stories like that of Espindola or “Belen,” an 11-year-old girl whose case became a cause celebre in Chile last year.

Belen, whose real name cannot be published for legal reasons, became pregnant after her stepfather repeatedly raped her. After she gave birth, former President Sebastian Pinera praised her “maturity,” a comment that left many women’s rights campaigners aghast.

“It’s brutal to hear our president saying things like that,” Dides says. “It’s just complete ignorance. It’s not possible that she was mature enough, physiologically or psychologically. This girl was effectively tortured and there is no excuse for that kind of comment.”

Nevertheless, Chile, and Latin America, may already be ahead of the US in one aspect of the public debate about abortion.

“I have never heard of a situation in Latin America where doctors are being gunned down for performing abortions,” says Lilian Sepulveda, a Latin America specialist at the Center for Reproductive Rights.

Whether that translates to the lifting of Chile’s blanket ban on abortion will now be decided by Bachelet and the country’s fragmented congress.

More from GlobalPost: Mass same-sex marriages, presided over by the mayor? Yes, and then some, in Mexico City