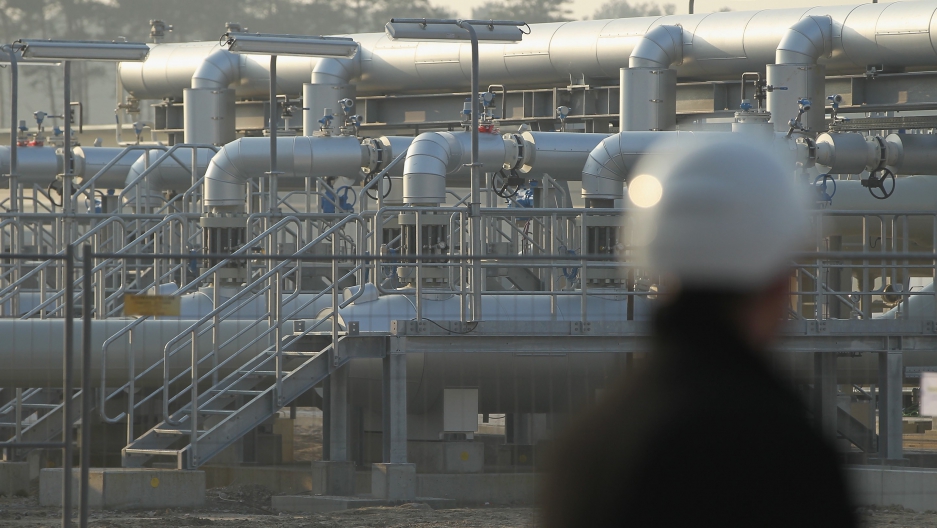 SINES, Portugal — This port on the Atlantic coast is just about as far from Russia as you can get on the European mainland.

But this pretty little town where explorer Vasco da Gama was born five and a half centuries ago could soon be on the frontline of a battle to break Europe's dependence on Russian energy exports.

Just south of the picturesque fishing harbor stand three squat concrete cylinders girdled by blue and yellow pipes. Each is capable of holding more than 120,000 cubic meters of liquified natural gas. None of it comes from Russia.

"We've got capacity in the Iberian peninsula that's sufficient to significantly supply the rest of Europe from the south," says Paulo Furtado, regulation manager at Portugal's energy network company REN.

"We are an important back-up, an alternative source of gas in case of emergency."

The 28 countries of the European Union rely on Russia for 30 percent of the natural gas they use to heat homes, cook meals and power industry. For some, including Finland, Bulgaria and Latvia, it's closer to 100 percent.

Europe's addiction to cheap Russian gas gives Moscow a powerful tool in the standoff with Western countries over Ukraine.

That was more than clear on Thursday, when Russian President Vladimir Putin threatened to cut off gas to Ukraine. Since most of Europe's supplies from Russia flow through Ukrainian pipelines, EU leaders are painfully aware that means a real risk to their own deliveries.

They have tasked EU headquarters with drawing up plans to manage risks from a sudden cut and reduce their economies' long-term reliance on a single supplier they no longer trust.

Alternatives are out there, but none are cheap and all are likely to require a rare level of unity and political will from European governments.

The search has global implications, involving factors as diverse as Japan's post-Fukushima nuclear policy, prospects of a thaw in the West's relations with Iran, China's belated drive to clean up the air over its cites, and the cheap energy boom that has renewed the competitive edge of American industry.

In the short term, the weather would cushion any interruption of Russian gas exports.

Unlike in 2009, when several countries shivered through a Russia-Ukraine dispute that cut gas supplies for two weeks, the current threats come as spring follows an exceptionally mild European winter.

EU members have more than 37 billion cubic meters of gas in storage — enough to keep the bloc going for several weeks.

"In the very short term, the impact would be very limited until probably the beginning of the coming winter," says Georg Zachmann, an energy specialist at Bruegel, a think-tank in Brussels.

"Demand in the summer is typically around one-third or one-quarter of winter demand and in almost all EU member states, that could be satisfied from other sources," he said in a telephone interview. "The question is how do we get the storages filled when there’s no Russian gas coming in?"

Zachmann published a estimate last month suggesting that the EU could import an extra 43 billion cubic meters by pipeline from Norway and North Africa together with more shipped in from further afield using liquified natural gas terminals such as Sines.

Combined with increased domestic production from gas fields in the Netherlands, households cutting consumption, and a switch to other power sources such as oil or coal for heating and industry, the report concludes that Europe could wean itself off Russian gas this year.

However, no one is pretending it would be easy or cheap.

In North Africa, Libyan supplies are threatened by unrest and Algeria needs more of its gas for internal use. Norway's reserves are limited and there's environmental opposition to stepping up production in Netherlands.

Using oil for heating and power is twice as expensive as natural gas, hardly popular as Europe struggles out of recession. Oil and coal are dirtier fuels. Increasing coal use is already threatening EU targets for fighting global warming.

"We will have to deal with political considerations, but if gas supplies are stopped in Europe, we will be in a different political situation," Zachmann says. "Then things will become feasible that you can’t think of in normal conditions."

Many are looking to liquified natural gas (LNG).

It's made by super-cooling natural gas into a liquid that takes up 600 times less space and can be loaded onto giant refrigerated ships, transported around the would and gently warmed back into gas at facilities like the one at Sines.

Portugal and neighboring Spain meet around half their gas needs with LNG, reducing their dependence on gas piped under the Mediterranean from Algeria. They are among the few EU nations that get no gas from Russia.

With 35 percent of Europe's LNG regasification capacity, Spain estimates it could replace 10 percent of Russia's exports to Europe.

"Spain buys all its gas from non-Russian sources and it has invested heavily to have flexibility to import liquified natural gas," says Marta Margarit, general secretary of Sedigas, an industry association representing the Spanish gas sector. "The spare capacity is big enough to supply Spain and part of the European needs."

Several EU countries have invested in LNG since the 2009 Ukraine gas crisis. Poland and Lithuania — among those feeling most threatened by Russia's aggressive new posture — are scheduled to open their first terminals this year.

The problem is that there may not be enough affordable LNG to go around.

Much of it is being sucked up by Asia right now.

Japan has upped its intake to replace nuclear reactors shut down after the 2011 radioactive leaks from the tsunami-damaged Fukushima plant. China is switching to gas in a drive to cut the coal emissions choking its cities.

That demand has inflated the price for LNG. According to some estimates, Europe would have to pay twice as much to swap Russian gas with LNG.

Connections between countries within the EU have improved since the 2009 Ukraine crisis. Nevertheless, cross-border bottlenecks still stymie plans for a united European energy market thanks to a host of political, economic and legal hurdles thrown up by national authorities striving to protect domestic firms.

Iberia's dreams of coming to the EU's rescue are limited because only one gas pipeline links Spain to France and the wider European network beyond.

Still, industry insiders hope the confrontation with Russia will spook Europe's politicians into finally agreeing to link up their networks.

Further down the line, there's excitement in Europe about the prospect of LNG exports from the United States and Canada as the shale gas revolution enables North America to produce more than it needs.

Russia's threats have heightened calls for Washington to relax export restrictions despite concerns by US businesses that could affect the low energy prices they've enjoyed thanks to shale.

Europe is also looking at prospects for obtaining gas from Central Asia, Iraq or Iran via Turkey even though all those options are fraught with problems far beyond the expense of building pipelines.

A breakthrough in negotiations on Iran's nuclear program would be needed to persuade the West to ease sanctions, while Russian pressure would weigh heavily on Western efforts to tap into Turkmenistan's gas reserves.

More from GlobalPost: Ukraine’s revolution isn’t over yet

Even in the most optimistic scenarios, it's unlikely North American exports will be making any impact for another three to four years. Iran would take even longer.

"It's hard to see any kind of panacea or savior in the medium term," admits one expert at the International Energy Agency in Paris. "There is not going to be a white knight charging in saving the day."

Switching to renewable energy would help Europeans fight climate change and lessen the need for gas, but that involves expensive infrastructure investment and risks hurting the competitiveness of struggling European industries.

"There aren't any easy or cheap alternatives to Russian gas, the alternatives are more expensive and will take time to put in place," says Simon Pirani, senior research fellow at Britain's Oxford Institute for Energy Studies.

Despite the great risks to Europe, an energy standoff could be even more costly for Russia. The Bruegel think-tank estimates a European switch from Russian gas could wipe 2.2 percent off Russia’s economy, which is already grappling with the threat of recession.

For all the bluster on both sides, Bruegel expert Zachmann believes the Europeans will try to keep their regular fix of Russian gas even as they draw up a list of standby suppliers.

"The option is having alternative supplies that may be more expensive, but that we can tap into in times of crisis," he says.