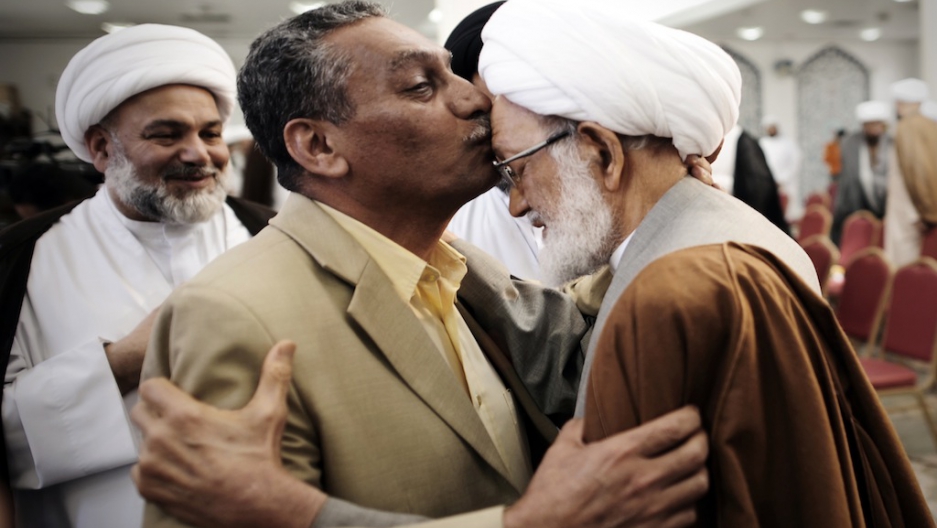 A Bahraini man kisses the forehead of Sheikh Isa Qassim (R), top senior Shiite cleric, during a protest against the closing down of a Shiite Muslim clerics' council earlier this week, at a mosque in the capital Manama, on February 2, 2014. A Bahraini court ordered the closure of the Olamaa Islamic Council and the liquidation of its assets following a lawsuit by the ministry of justice, Islamic affairs and endowments, a judicial source said.
Credit: MOHAMMED AL-SHAIKH
Share

WASHINGTON — On April 6, the Formula 1 automotive racing event spotlighted the host country of Bahrain, which remains home to the region’s largest United States naval base. As a recent fact-finding visit revealed, the Kingdom continues to be a stark study in contrasts facing its share of challenges and fateful decisions ahead.

In one respect, Bahrain has served as a regional model for modernization, including the tolerant treatment of non-Muslim religious minorities, from Christians and Hindus to Jews and Baha’is.

But on the other hand, the minority Sunni government has inadequately addressed the legitimate grievances of its peaceful Shi’a majority, including religious freedom violations perpetrated against its members.

The recent shocking bomb attack by extremists outside the capital city of Manama, which killed three police officers, underscores the increasingly uncertain environment faced by Bahrain’s people and government. This should be a concern to the United States on the security front as well as for human rights reasons.

Three years ago in February, predominantly Shi’a protestors demanding reform and an end to anti-Shi’a discrimination were met by a heavy-handed response resulting in dozens of deaths and the destruction of Shi’a mosques and other structures.

While Bahrain since has taken steps toward progress, it must act with greater urgency and purposefulness to end religious discrimination and embrace lasting reform. Otherwise, events could well overtake Bahrain, undoing its achievements, unraveling its society, and emboldening the forces of instability and strife, not only in Bahrain, but also elsewhere in the region. If Bahrain acts wisely and expeditiously, it likely will not only avert deeper trouble, but usher in a brighter and more secure future.

During our January visit as representatives of the US Commission on International Religious Freedom, we heard an expressed commitment to making demonstrable progress, particularly on the rebuilding of the Shi’a mosques and other structures. Bahrain has allocated $8 million for rebuilding, a two-fold increase from its initial pledge.

Moreover, the government has set an end-of-2014 deadline, as opposed to its original deadline of 2018, to complete construction of the 30 structures that were destroyed during the 2011 disturbances.

Nevertheless, while the government told us it had completed construction of 10 of these Shi’a structures, it acknowledged that the Shi’a community had actually paid for and built six of them.

Officials said they arranged to secure legal permits for each of them, and several stated they were open to reimbursing the community. Reimbursement would be an appropriate follow-through on the government’s commitment, but would also be a welcome gesture of sincerity and good will.

A serious concern is that the government still is not holding the guilty accountable for the 2011 abuses that included targeting, imprisoning, torturing, and killing protestors. Only a few lower-level police officers have been prosecuted and convicted. There is little transparency about these cases, raising questions as to whether the convicted officers actually are serving jail time. It appears that no high-level officials have been held accountable.

Shi’a Muslims are still being arrested and detained arbitrarily, while incendiary sectarian rhetoric in the media continues against them. Discrimination persists, including in the Bahraini military and police, where no Shi’a serve at senior levels. Shi’a human rights defenders like Nabeel Rajab remain in jail.

One encouraging sign is that the Crown Prince has met with Shi’a and other opposition leaders. The Crown Prince’s involvement is a hopeful step forward and could pave the way for genuine progress toward reform. Such high-level engagement is essential.

In the end, both Bahrain’s successes and challenges highlight the crucial fact — seen across the globe — that religious freedom and tolerance promote stability and strength while discrimination and repression risk destabilization and strife.

Today, Bahrain stands at the crossroads between those two paths. It is time for Bahrain to follow the path toward reconciliation and inclusion by bringing Shi’a and Sunni together and by making the necessary reforms to end discrimination and build on its foundation of tolerance by fully respecting religious freedom.

Katrina Lantos Swett and M. Zuhdi Jasser serve as vice chairs for the US Commission on International Religious Freedom, an independent, bipartisan federal commission, the first of its kind in the world, dedicated to defending the universal right to freedom of religion or belief abroad.