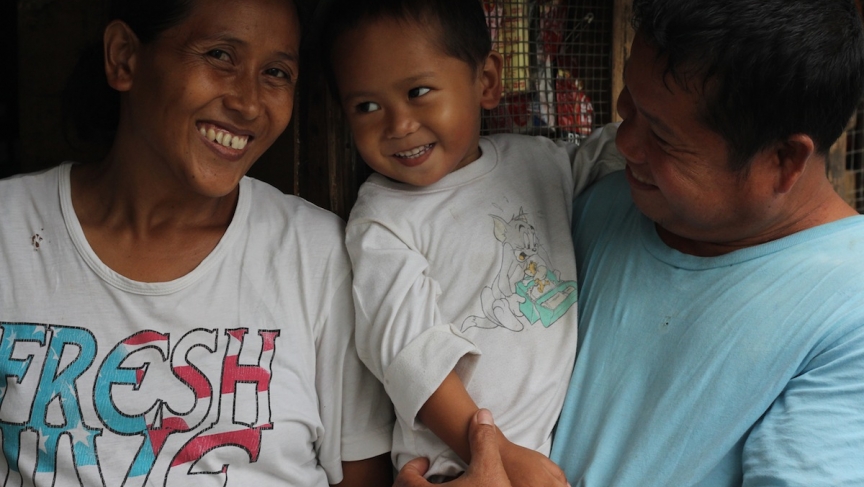 Jing Geronimo, inmate Roberto Maanyo and their son Robert James stand outside the small shack the family shares on the grounds of the Leyte Provincial Prison on the outskirts of Tacloban.

Like most of the buildings around the Philippine city of Tacloban, the Leyte Provincial Prison is a wreck. The gate is hanging off its hinges, and the cell blocks are in ruins. Guards are stationed under plastic tarps. With no place to be locked up, many of the inmates are free to roam the grounds. They play cards, do chores, keep pet roosters.

It's an unusual setup.

Immediately after Typhoon Haiyan barrelled into the Philippines in November, many of the inmates left the prison. They didn't exactly escape. In the chaos after the storm, the prison turned a blind eye as a few hundred inmates, along with most of the guards, walked out of the gates. They wanted to check on their homes and loved ones. Most of them returned after a few of weeks — and some brought their families back with them.

It’s a sign of how far from normal life still is in the hard-hit city of Tacloban.

Jing Geronimo, 34, says her family doesn't have anywhere to live, so they're staying in the prison for now. Her husband, Roberto Maayo, has been an inmate here for 11 years. Their whole relationship has played out over text messages and conjugal visits. Jing used to live with their 2-year-old son in a house not far from the prison. She and Roberto show me a grainy photo of it on their little knock-off Nokia phone.

It was a native Filipino hut, on stilts, with woven bamboo walls and a thatched roof. Roberto saved for five years to build the house for Jing, selling loose cigarettes and bags of chips out of a little shop in the prison.

A few months after the house was built, the typhoon blew it away.

“There was nothing left,” says Roberto, “so I asked them to come here. I told them let's just stay here, together.”

Roberto asked permission from the prison warden, a woman the inmates call Ma’am Merly, and she agreed, given the circumstances. Jing is pregnant; it was chaos back in Tacloban; and Roberto's prison block had been completely torn apart by the storm anyway.  Like about a dozen other inmates, Roberto gathered some debris and cobbled together a little shack. It's just big enough for the three of them to sleep on the floor.

“It's okay here, even if it isn't really okay, because no matter what, we have a place to live, even it's here in the prison,” says Jing. “I'm happy because I'm with my husband and we're together.”

For the first time in their lives, Jing, Roberto and their baby boy are living together as a family.

They know this won't last long, though. The prison is rebuilding the cell blocks. Workers are drilling tin roofing onto the rafters and hammering together new walls.

“It isn't like we can spend the rest of our lives here. I know that,” Jing says.

Once things get back to normal at the prison, the temporary village of debris will be taken down, and anyone who isn't actually incarcerated will have to move out.

But Jing's options for work and shelter outside in Tacloban won't be that much better. She's worried that she'll have to move far away to Manila, where she thinks there might be more work.

What she really wants to do, though, is to build another hut right outside the prison walls so she can see Roberto again, every day.