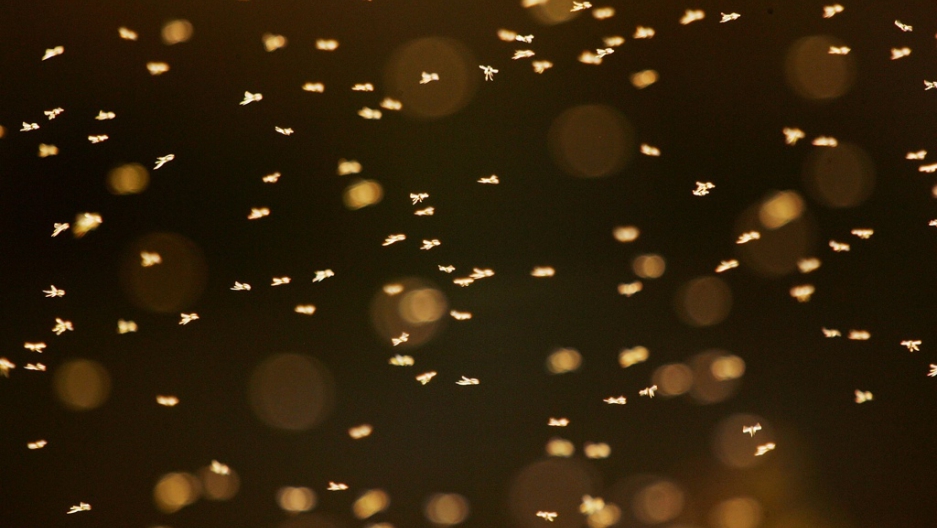 Mosquitoes swarm on the east shore of the Salton Sea, one of the first places where West Nile Virus appeared in the state, on October 22, 2005 across the lake from Salton City, Calif.
Credit: David McNew
Share

JACOBINA, Brazil — In this Brazilian farm town where legions of people have suffered from dengue fever, a campaign is fighting back, releasing swarms of mosquitoes engineered to wipe out their own species.

As workers open plastic containers allowing millions of newly hatched Aedes aegypti mosquitoes to spread their wings and flutter into the sky, it seems counterintuitive. After all, this is the same pesky bug that transmits the dengue virus through a human-to-mosquito-to-human cycle that's surprisingly difficult to break.

The traditional defense is to kill these flying vectors with chemical insecticides. But that hasn’t worked in Brazil or other tropical countries where dengue is a leading cause of illness and fatality.

Last year, Brazil reported 1.4 million cases of dengue, which is endemic in three of the 12 host cities for this summer’s World Cup. There is no vaccine. The most severe form of the illness, dengue hemorrhagic fever, can lead to shock, coma and death.

That’s where the “Franken-skeeter” comes in.

The insects are genetically modified (GM) in a laboratory with a lethal gene designed to devastate the Aedies aegypti population and reduce dengue's spread.

“We need to provide alternatives because the system we have now in Brazil doesn’t work,” said Aldo Malavasi, president of Moscamed, a Brazilian company that’s raising and testing the GM mosquitoes in Jacobina, located in eastern Bahia state. “We have thousands and thousands of cases of dengue and that costs a lot for the country. People are unable to work.”

But like with genetically modified foods, manipulating the genes of blood-sucking insects and then setting them free is raising concerns about potential impact on human health and the environment. Critics contend that more laboratory studies must be carried out before releasing highly mobile GM insects into the environment.

“They are even harder to recall than plants are if anything goes wrong,” says Helen Wallace, director of the British environmental group GeneWatch.

However, conventional public health campaigns to fight dengue by fumigating and adding larvicide to water tanks have had little impact because Aedes aegypti often live and breed inside homes and develop resistance to insecticides. Bed nets used while sleeping are useless because the mosquitoes that carry dengue bite during the day, not at night. Education campaigns urging people to wear repellent and long sleeves have fallen on deaf ears.

These obstacles plus increased travel and trade have led to a 30-fold jump in dengue cases around the world since the 1960s, according to the World Health Organization.

“I had a fever. My body ached,” says Luiza Rosa de Jesus, a retired cleaner who was bedridden last year amid a major outbreak of dengue in Jacobina. “On the seventh day my gums began to bleed. I went to the clinic and they said I had dengue hemorrhagic fever.”

To prevent more such cases, Malavasi and his team are working with a strain of Aedes aegypti developed by a British biotech firm called Oxitec. Known as the OX513-A, it is the world’s first genetically modified insect to be set free in the wild. A small number were first tested in 2010 in Cayman Islands and Malaysia. But the largest-ever field test, according to Oxitec, is now underway in Jacobina.

The mosquitoes contain a lethal gene, but survive in the Moscamed lab with the help of the antibiotic tetracycline. Once they reach larval stage, the males are separated from the slightly larger females, which are destroyed. The males — which don’t bite — are released so they can mate with wild females. Their offspring inherit the lethal gene and die before they can reproduce because, in the wild, there is no tetracycline.

The strategy is similar to programs that use radiation to sterilize agricultural pests like the Mediterranean fruit fly. Irradiated mosquitoes, however, are too weak to mate, which is why scientists have gone the GM route. Malavasi says GM mosquitoes could work in rural areas and small and medium-sized towns. Rather than a silver bullet, he describes them as part of a broad armory that must be used to fight dengue.

But Wallace, of GeneWatch, focuses on the potential dark side. She points out that a small number of Moscamed’s female GM mosquitoes are inadvertently released along with the males and could bite people, raising the possibility of allergic reaction. In addition, she says their offspring could survive by feeding on food or waste contaminated with tetracycline and pass on their GM traits.

Another concern is that a different insect, such as the so-called Asian tiger mosquito, which is also a dengue vector, could move into the vacuum as more Aedes aegypti are killed off. Phil Lounibos, an expert on insect ecology and behavior at the University of Florida, questions whether reducing the Aedes aegypti population will actually reduce cases of dengue.

“Most dengue is moved around by people not mosquitoes,” Lounibos says. “Even in places with good mosquito control, they can’t control dengue because so many infected people are walking around and just a few mosquitoes will maintain endemic dengue.”

Dengue cannot be spread directly from person to person, however.

But Hadyn Parry, the CEO of Oxitec, is pressing ahead. He brushes off concerns about the Asian tiger mosquito because it is far less efficient in spreading dengue than Aedes aegypti. He's confident any escaped GM females will die off, because it’s highly unlikely they will come into contact with tetracycline in the wild at just the right doses. Besides, he says, the whole idea of field tests in isolated towns like Jacobina is to answer some of these questions and find out if the method works.

The Brazilian government agrees. It has authorized Moscamed to blanket Jacobina with GM mosquitoes during a two-year test period.

So, twice a week, Moscamed workers drive up and down the streets of Jacobina neighborhoods in white pickups releasing the insects and measuring their impact on the wild mosquito population.

In Europe or the United States, the uproar would be immediate, given the controversy over anything attached to the initials “GM.” But here in Jacobina no one raises an eyebrow.

It helps that there’s nothing secret about the experiment. Moscamed’s trucks are decorated with images of giant mosquitoes and the word “transgenic.” The company and local health officials hold meetings and pass out brochures to educate the public. There’s even a musical public service announcement that plays on the radio.

But the main reason for the lack of opposition is that Jacobina residents are desperate for a solution, says Ivonildo Dourado, the town’s health secretary.

“Everything else we have tried in the past has been useless. The mosquito is winning the war,” Dourado says. “That’s why we're betting on this project.”

Thus far, Moscamed is reporting a 90 percent drop in wild Aedes aegypti mosquitoes in Jacobina. Other countries are taking note.

Field testing with Oxitec’s GM mosquitoes will begin in Panama in April. Meanwhile, the US Food and Drug Administration is expected to decide soon on whether or not to approve a test release of GM mosquitoes in the Florida Keys, which suffered an outbreak of dengue in 2009.