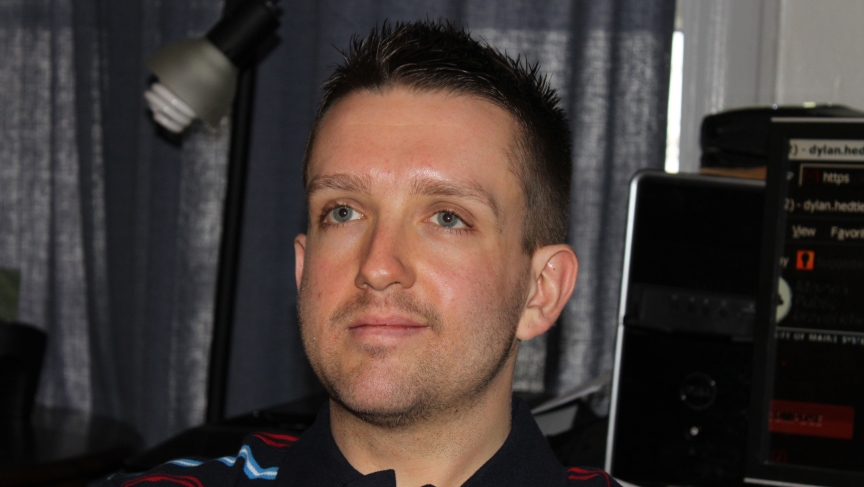 The genocide in Rwanda changed many lives in that country. But it also changed lives across the world, like that of Dylan Hedtler-Gaudette.

He didn't experience the genocide, or even follow it on the news. He was just seven at the time. But what occurred there left its imprint, deeply, when he learned what happened.

The world's failure to stop the genocide in Rwanda led a decade later to the adoption of an international principle, known as the Responsibility to Protect, or R2P. The idea behind R2P is that member states of the UN must protect their civilians from mass atrocity crimes — and if they can't, or won't, then other countries must act to do so.

Hedtler-Gaudette first heard about R2P in college, as a student at the University of Southern Maine. That's when he decided to dedicate his life to furthering this principle, but I'm getting ahead of myself.

I first came across him because he's an avid listener of our radio program, PRI's The World. He posted on The World's Facebook page one day in response to an interview we had run. He wanted to make sure we understood that R2P is not synonymous with military intervention.

Dylan happened to get in touch with us just as were starting to look at international security issues through the eyes of millennials, those born between 1980 and 2000. He is 27.

So I called and asked if I could visit him in Portland, Maine.

On the way, I went to see his mom, Kristine Hedtler. I wanted to find out how a youth who's never traveled the world or been in a war zone became obsessed with preventing atrocities in faraway places. I asked her what he was like as a boy.

"He came out screaming," she said, laughing. "He was very robust, into everything, very curious. He really had his own strong ideas at a very young age." And she didn't squelch that strong-willed nature because she knew it would serve him well at an older age.

When I arrive at Dylan's apartment near campus, he's just returned from the gym and he's making some tea. Turns out he's pretty serious about his tea.

"I found this great extra-strength ginger tea," he says. "And then I also use a base of green tea so I create my own blend. It's invigorating. The exact right amount of honey is key."

I ask him if he's a man of habits. "Yeah," he says. "You kind of have to be if you're blind or visually impaired."

Dylan has been going blind since he was a young teenager.

When I first found out, I thought his disability would be incidental to his story. When we sit down to talk, it turns out to be key.

"I had no idea what I wanted to do," he tells me. "A lot of that stemmed from dealing with going slowly blind. It was an extremely emotionally volatile experience for me. I didn't deal with it well. I was mostly in denial and when I wasn't in denial, I was very angry and frustrated about it."

He was plenty smart, but he didn't go to college after high school. Instead he worked a stultifying job in a faceless cubicle at a big insurance company. Still, the job taught him a thing or two.

He struck up a friendship with the janitor who emptied his wastebasket at the end of the day. The man was a refugee from Somalia.

"We eventually got to the point where he was telling me stories about him and his family," Dylan says. "Some of his extended family had actually been killed, very, very violently and brutally. And he had had to see it; he had had to witness it. Yet, he somehow managed to be relatively optimistic. He was just so happy to have made it here."

Those stories planted a seed in Dylan.

He finally started college at the University of Southern Maine, but he was still angry, still in denial. He didn't avail himself of the technology that would have made his life easier.

"Those years just built up and finally I had a sort of a breaking point," he tells me. "You know, the clichéd sort of rock bottom where I withdrew from school and decided I needed to do something different. I needed to learn how to be blind, but be productive and effective with it."

Dylan finally began training on the software and devices he now uses to do his work. He stopped feeling sorry for himself. And he re-enrolled at USM.

And then, as if on cue, he met a teacher who changed his life. "It was just a completely transformational experience," he says.

The teacher was Julia Edwards. She teaches political science at the University of Southern Maine.

She's young, charismatic and passionate about all things United Nations. Dylan signed up for a class she taught on peacekeeping.

"I remember him coming to my office after a day where we had talked about Responsibility to Protect," she says. "It's something that I'm pretty passionate about, something I was very interested in in my graduate studies. He came into my office and basically said I want to advance this. I want to make this the way the world thinks in the future. I want to kind of become the guru of R2P."

Dylan never looked back. He's interned with two NGOs dedicated to advancing the concept of Responsibility to Protect. He's heading to law school at Northeastern University in the fall. And his dream now is to become a prosecutor at the International Criminal Court in the Hague.

He sees himself as part of a new generation searching for new paradigms. "We are the first post-cold war generation," he says.

"We have come of age being able to access and engage in the world much more widely than I think any other generation prior to us. We need to stop focusing on the national interest. The lines are increasingly blurring between countries and between peoples and we need a global governance system that acknowledges that."

At the end of my day with Dylan, after meeting his mom and his professor and a bunch of his fellow students and friends, I assemble the clues to my mystery.

It turns out it's just life that led Dylan Hedtler-Gaudette to his calling.

A strong mother. A big dose of adversity. Lots of empathy.

Some chance encounters. A great teacher. And blind or not, a remarkable vision.

Tomorrow night, he joins others at the University of Southern Maine campus in Portland for a public event called "Paving the Way to a Better World: The 20th Anniversary of the Genocide in Rwanda, the Crisis in Syria, and the Responsibility to Protect."