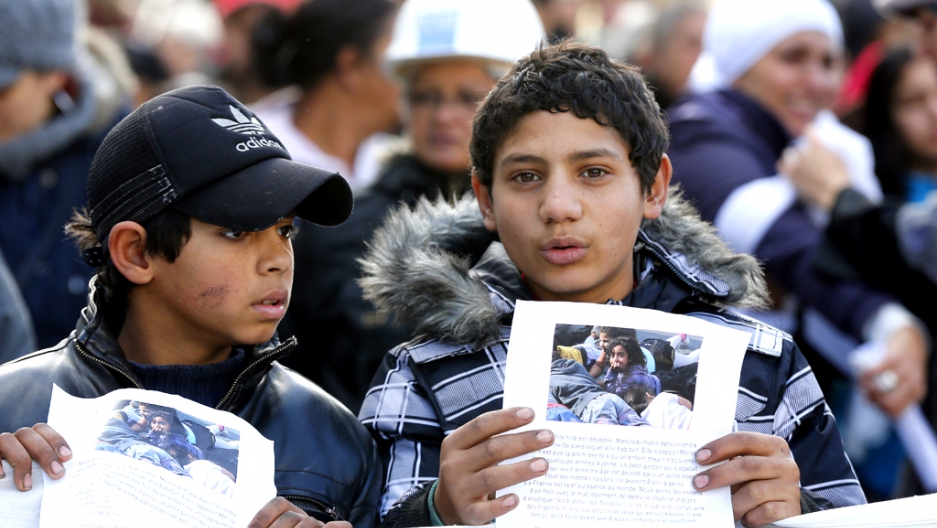 Two children hold a picture of Melissa, an eight-year old Bulgarian Roma girl who perished in a fire that destroyed her camp in the Paris suburbs earlier in the week, during a white march commemorating her death, in Bobigny, near Paris, on February 16, 2014.
Credit: FRANCOIS GUILLOT
Share

"When I saw it, I thought... maybe this is what it was like during the Hitler era."

Those are the words of Michal, a Roma man who was interviewed by Amnesty International in January.

The UK-based NGO released a report on Tuesday, excoriating Europe for its treatment of Roma people. Amnesty's report, titled "We ask for justice: Europe's failure to protect Roma from racist violence," said that far from protecting the Roma from hate crimes, European leaders seemed to blame Roma for "failing to integrate."

While Europe is home to 10-12 million Roma, a recent survey found that 90 percent of them live in poverty.

August saw police battle with hundreds of far-right protesters who tried to storm Roma districts in towns across the Czech Republic.

Three men were sentenced for life in Hungary for a string of racist attacks that killed six Roma, including a 5-year-old boy.

Farther west, there were high-profile cases of Roma evictions in Italy, France and the Netherlands.

At the height of the Italian summer, the authorities cut the water supply to a camp of 300 Roma near Turin. And a report in Spain showed the economic crisis hitting the Roma there disproportionately hard, with two-thirds now living below the poverty line.

"There has been a marked rise in the frequency of anti-Roma violence in Europe in the last few years," said Amnesty's John Dalhuisen, Europe and Central Asia Program Director.

More from GlobalPost: Once again, the Roma have become everyone’s favorite scapegoat

He added, "All too often European leaders have pandered to the prejudices fueling anti-Roma violence by branding Roma as anti-social and unwelcome."

Here is just a small selection of the incendiary statements made by European politicians about Roma. In 2013, the co-founder of Hungary's ruling party, Zsolt Bayer, said, "A significant part of the Roma are unfit for coexistence. They are not fit to live among people. These Roma are animals, and they behave like animals."

The Amnesty report took a closer look at the experiences of Roma in France, the Czech Republic and Greece. The plight of Roma in Greece made international headlines last year, when a Roma couple was thought to have abducted a "blonde angel." DNA testing later found that she was Roma by birth, and given by her birth mother to the couple.

A survey in 2008 found that 54 percent of the Roma in Greece had been victims of crimes. Of those, 26 percent thought they had been targeted because they were Roma. The police in Greece were accused of harassing Roma, carrying out around 1,130 operations in settlements over the course of 2013.

More from GlobalPost: 14 unbelievably racist things politicians are saying about the Roma