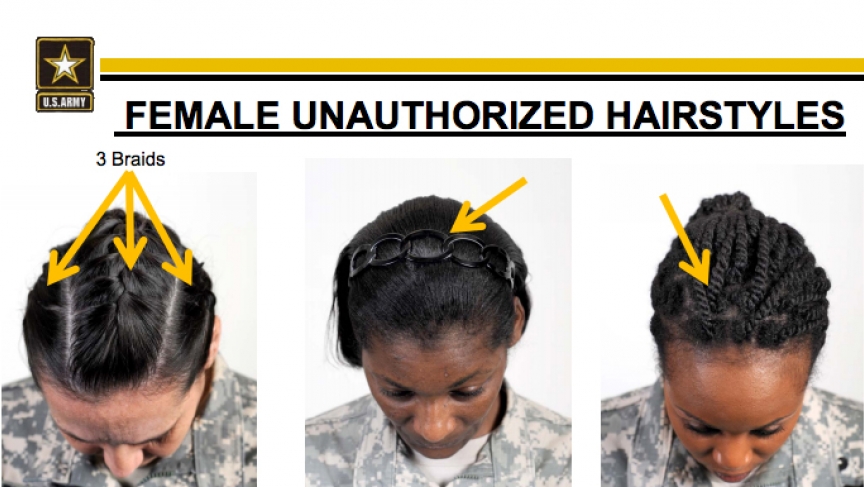 A new US Army policy on grooming standards is meant to ensure a uniform, professional appearance among soldiers — but it has ignited a discussion of race, differences and discrimination.

For men, the policy prescribes limits on lengths of mustaches and sideburns and bans mohawks. For the most part, that policy has gone over just fine. But the new rules governing female grooming habits, particularly hairstyles, are upsetting many soldiers.

They say some of the changes target black women, while ignoring the practical differences in how hair grows.

Sgt. Jasmine Jacobs, of the Georgia National Guard, started an online petition with the White House, asking the executive branch to rethink the policy and allow professional, ethnic hairstyles.

More than 13,000 people have signed it so far. It still needs another 86,000 signatures by April 19 for the White House to respond.

But many soldiers are speaking up about the issue already. Among them is retired Lt. Col. Patricia Jackson-Kelley. She's a veteran of the US Air Force, and the Air Force, Army and Navy Reserve. She's also part of the National Association of Black Military Women.

“I don’t think they’ve taken into consideration that black hair is different hair,” she says. “We can’t wash our hair every day.”

For Jackson-Kelley, the Army has taken away hairstyles that offer black female soldiers convenience, while maintaining a professional look. It doesn’t leave them many options.

“You can relax your hair. But then there’s certain hair that will not stand up against the relaxer,” she says. “And if you press your hair, it’s not going to hold if you’re out in the field for a week or so.”

Soliders are worried about what the new policy may lead to — including certain non-judicial punishments. Jacobs, for example, says she may be forced to wear a wig to comply with the regulations.

Jackson-Kelley says she hopes speaking out will lead to fairness and equality in the Army grooming rules. She’s hoping the Army will take another look at its new policy and consider making amendments.

But she's not especially optimistic.

“Sometimes, some of the issues that you fight for ... it’s like fighting a losing cause,” she says.

The full set of rules is below. Scroll down to page 12 to see the requirements for female soldiers.