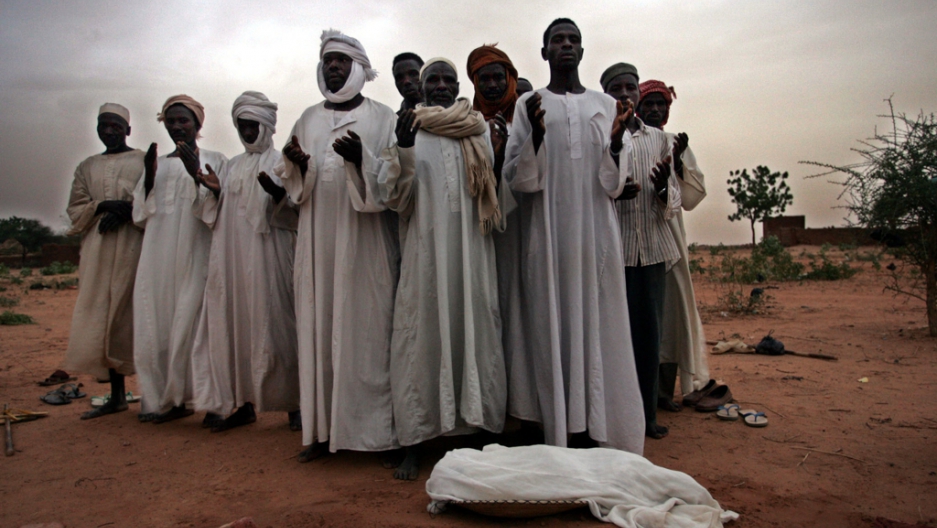 Relatives mourn over the body of 1-year-old Ali, who died of malnutrition 21 June 2004 in a refugee camp in El-Geneina in the Darfour, Sudan. More than 80,000 displaced people reached Mornay to try to escape ethnic violence in the Darfur region. After surviving massacres carried out by pro-government militias on their villages, these refugees are now virtual prisoners in the camp as the same militias now control the camp's periphery conducting violent attacks and rapes on villagers who go out looking for food and essential items according to Medecins Sans Frontiers (MSF) (Doctors without Borders) the French medical charity. AFP PHOTO/MARCO LONGARI (Photo credit should read MARCO LONGARI/AFP/Getty Images)
Credit: MARCO LONGARI
Share

For those who lived through the genocide in Rwanda, the mass killings were an indescribable horror. For those who watched from afar, it was an international shame.

The world stood idle as an estimated 800,000 men, women, and children were slaughtered in the course of 100 days in 1994. After, hanging its collective head, the world promised that "never again" would it allow such a horrifying conflict to unfold.

But even while making that promise, the world watched as people in Liberia and the Democratic Republic of Congo killed and displaced each other by the millions. Conflicts in Darfur and Syria would also later test the world's "never again" resolve. The US invasion of Iraq and Mexico's drug war created new armed conflicts that also failed to live up to the lofty promise.

"Never again," it seems, was an empty promise. The world of international actors capable of preventing or intervening in such conflicts has over and over again avoided doing so, even when there was the political and public will to do so.

Government soldiers in Zaire march after surrendering to the rebel forces in 1997. (Alexander Joe/AFP/Getty Images)

The First and Second Congo Wars developed directly out of the Rwandan genocide. Mobutu Sese Seko, the president of the Congolese nation then called Zaire, had supported the Hutu-led government in Rwanda. When a Tutsi insurgency claimed power in Rwanda, more than a million Hutus, many of whom had perpetrated the genocide against the Tutsis, fled into Zaire and regrouped. Rwanda’s Tutsi-led government then supported an uprising against Mobuntu led by Laurent Kabila. Kabila seized power on May 17, 1997, named himself president, and Zaire become the Democratic Republic of Congo.

Kabila’s rule over the DRC was not very different from Mobuntu’s over Zaire. In an attempt to consolidate power, he expelled foreign forces, including the Rwandan and Ugandan military forces that had helped him win the rebellion. That sparked the second phase of the conflict, which involved nine African nations, 20 rebel groups, and 40 to 50 sub-conflicts.

Despite peace accords signed in 2003, violence, famine, displacement, and rape remain parts of daily life in the DRC, which is now host to one of the world’s worst humanitarian crises.

An 8-year-old boy, Kalashnikov gun in hand, loyal to the warlord Charles Taylor, leads a group of soldiers in 1996 in Monrovia (AFP/Getty Images)

The First and Second Liberian Civil Wars involved the rise and fall of the guerrilla revolutionary, eventual dictator and war criminal Charles Taylor. Taylor became president of Liberia in 1997 after leading a violent anti-government rebellion against President Samuel Doe in 1989. That was the First Liberian Civil War. Ten years later, a rebel group supported by neighboring Guinea — the Liberians United for Reconciliation and Democracy — reignited the war against Taylor. Another rebel group, the Movement for Democracy in Liberia, which was backed by the Ivory Coast, joined the fighting in 2003. International pressure sent Taylor into exile and in 2012 the International Criminal Court convicted Taylor of 11 war crimes related to his support of rebels in Sierra Leone. He was sentenced to 50 years in prison.

A short and costly war, this one.

Eritrea split from Ethiopia in 1991 after a decades-long war of independence that began in 1961. It overlapped with the Ethiopian Civil War that began in 1974. The 1998 war between the two enemy nations was over a disputed territory called Badme, which the United Nations determined should be under Eritrean control but remains occupied by Ethiopia to this day.

Relatives mourn the death of 1-year-old Ali, who died of malnutrition at a refugee camp in Darfour in 2004. (AFP/Getty Images)

In 2003, two rebel groups in the Darfur region of southwestern Sudan, the Sudan Liberation Army and the Justice and Equality Movement, took up arms against Omar al-Bashir’s government in Khartoum, which they accused of oppressing non-Arab Sudanese.

Khartoum responded brutally. Government forces joined with a Sudanese militia group, the Janjaweed, to wage a campaign against Darfur that many in the international community, including US Secretary of State Colin Powell, called genocide. Both sides reached a cease-fire agreement in 2010, but violence has continued — though at diminished levels — and a lasting peace seems unlikely to come any time soon.

Bashir remains president of Sudan. He is the first sitting head-of-state to be indicted for war crimes by the International Criminal Court.

Iraqi resistance fighters celebrate on May 1, 2004 in the flashpoint Iraqi city of Fallujah (Wathiq Khuzaie/Getty Images)

The US war in Iraq and the subsequent insurgency cost at least 100,000 military and civilian lives. (Some sources, including Lancet and PLOS Medicine Survey, put the number at more than 500,000.) Among the dead were nearly 4,500 American military personnel.

Since the withdrawal of US troops, sectarian violence has only escalated. Recent violence has at times exceeded the worst of the war.

While the US invaded Iraq on what it claimed were humanitarian and security reasons — to free Iraqis from Saddam Hussein and prevent the leader from using his weapons of mass destruction — no such weapons were ever found and with no post-war plan for rebuilding, the country unraveled into violent chaos. Despite ongoing sectarian conflict and near daily bombings, Iraq is all but ignored these days.

Military police stand guard at the scene of a murder on March 23, 2010 in Juarez, Mexico (Spencer Platt/Getty Images)

Since 2006, rival drug cartels have turned some parts of Mexico into war zones. Mexican police and military forces seem unable to control the violence. Across the border in the United States, demand for drugs, gun trafficking, and ineffectual drug policy fuel the killing.

The actual death toll is likely much higher, but experts are encountering something the Justice in Mexico Project, a research initiative at the University of California in San Diego, calls a “methodological problem.” While news media refer to “drug-related homicides,” there’s no formal definition of “drug-related homicide” in Mexican criminal law, so it's difficult to account for the total deaths directly or indirectly related to the Mexican drug war.

Suffice to say, it's bad.

Syria’s peaceful Arab Spring uprising against President Bashar al-Assad has turned into a nightmare lasting three years and counting. Assad reacted to the protests brutally, giving rise to an armed rebel movement. Foreign militants then seized on the chaos, entering the country to fight for their own ends, turning some segments of the rebels into Al Qaeda-styled terrorist groups. It only gets more complicated from there. The international community, wary of supporting the wrong rebels, is instead sitting on its collective hands. Meanwhile, the death toll rises and the slogan "never again" appears as distant as ever. GlobalPost covers the Syrian crisis daily.