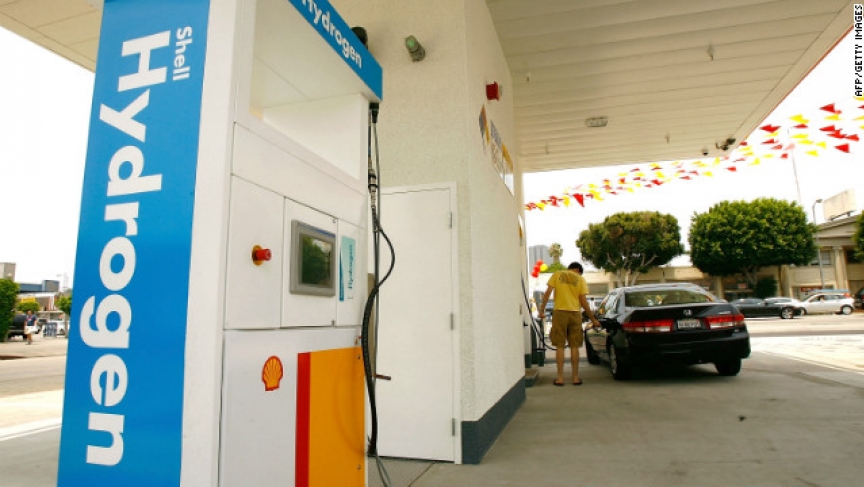 The high cost of creating a network of hydrogen refuelling stations is one problem facing the wider adoption of fuel-cell cars.

An old engineering joke goes, “Hydrogen is the fuel of the future - and it always will be.” Within the year, though, new hydrogen fuel cell cars may turn that old gag on its head.

Two major car companies, Hyundai and Toyota are set to introduce mass-produced hydrogen fuel cell cars by 2015. Jack Brouwer, associate director at the National Fuel Cell Research Center and professor of mechanical and aerospace engineering at University of California-Irvine, is pretty excited about it.

“[The Toyota model] will be a car that has performance characteristics that are like some of the Lexus models,” Brouwer says, “which will be quite attractive for acceleration, and feel, and drive. It also will have a new design — not built on the platform of an existing vehicle, but rather a brand-new fuel cell design. It was unveiled at the LA auto show earlier this year.”

Hyundai, Brouwer says, will start mass producing fuel cell SUV’s starting next month, on the same manufacturing line as their regular compact SUV. They will start delivering those vehicles to customers in southern California this year.

Both companies, Brouwer says, are committed to bringing the new cars not only to California, but to the US northeast as well, and then to the rest of the country. The vehicles are also being introduced in Europe and Japan.

Creating the infrastructure for hydrogen fuel has also been a technological challenge, but this too, Brouwer says, is starting to change.

“Hydrogen is already being moved around in at least three major ways,” he says. “One of the major ways is via pipeline. For example in southern California near the airport, and near the refineries in Long Beach and the port, we already have ... around 25 or 30 miles of hydrogen pipeline.”

Hydrogen can also be delivered by truck, either as a gas in pressurized containers or in a liquefied version of hydrogen. “Depending upon the distance that one has to deliver it,” Brouwer explains, “one [method] would be preferred over the other.”

Some experts and automakers still oppose wide adoption of hydrogen fuel cell cars. Most notably, Elon Musk, CEO of Tesla Motors (maker of all-electric vehicles) referred to the technology as “so bulls**t,” in a speech he gave in 2013.

Other, more sober, analyses express concern about the so-called “well-to-wheels” carbon footprint issue. Hydrogen fuel cell cars have zero emissions at the tailpipe, but most hydrogen produced for cars comes from natural gas, which is costly and requires a lot of energy, creating considerable CO2 emissions. (This changes drastically, however, if hydrogen is produced using renewable energy sources, such as BioGas, solar or wind, methods that are all meeting with at least some success.)

By far the most common criticism, however, is the lack of infrastructure in place for these cars to have any chance of reaching a mass market. Therefore, the argument goes, it’s better to improve the hybrids we already have and build better batteries for electric cars.

Brouwer sees no need for competition between these two types of vehicles.

“Both of them are positive for our use in society in the future,” he says. “They both are zero emission vehicles on the vehicle itself. They don’t produce any greenhouse gas emissions, nor any criteria pollutant emissions, so these are both good technologies for the environment.”

“They also are both efficient technologies,” he continues. “As a matter of fact, battery electric vehicles are more efficient in converting stored energy on the vehicle to propulsion power than are fuel-cell vehicles. But fuel-cell vehicles have other advantages compared to battery-operated vehicles that enable them, for example, to be refueled much more quickly ... to go much longer distances ... and to be used in larger vehicle platforms like buses or SUVs, or even long haul trucks.”

For Brouwer, owning a Tesla and a fuel cell powered car is a future worth thinking about.