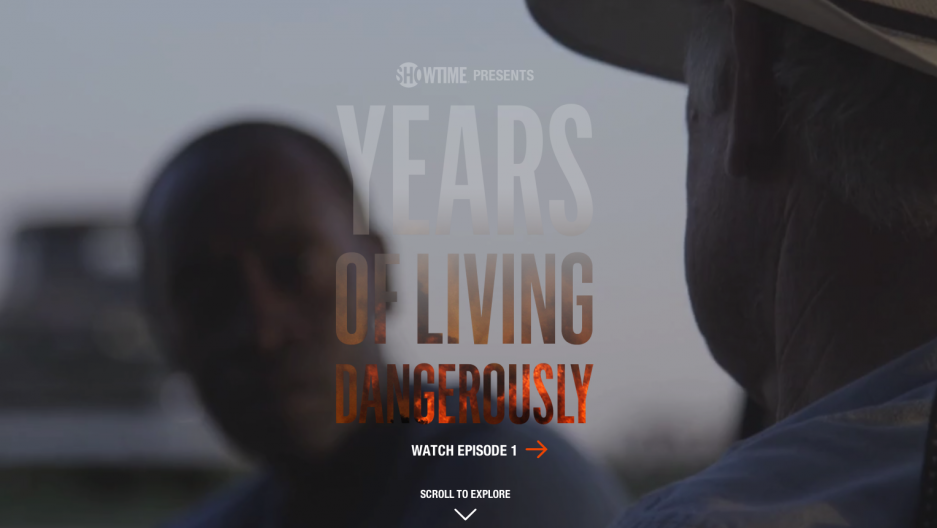 Can Hollywood and a handful of journalists save the planet? Let's hope so.
Credit: Screen grab/Showtime
Share

BOSTON — On April 13, Showtime will debut "Years of Living Dangerously," a documentary film about climate change.

Gelber, the project's executive producer and co-creator, is no stranger to high profile projects. He was a producer at 60 Minutes for 25 years.

"I covered about ten war zones in my years at 60 Minutes, but this story, global warming, is just as dramatic —  and more important — than any of them," Gelber writes on the film's website. "We've spent three years figuring out how to tell the story in ways that are absolutely riveting — and with the same editorial integrity that guided us at 60 Minutes."

Here's what Gelber had to say to GlobalPost about the film and what he hopes it will accomplish:

GlobalPost: How did you put together this varied team of correspondents, and what did this mix bring to the project?

Gelber: We reached out to some experienced journalists like Tom Friedman, Lesley Stahl and Chris Hayes, all of whom have reported on climate change. We also recruited distinguished Hollywood talent who are concerned about global warming. Some, like Matt Damon, Don Cheadle and Harrison Ford, have a long history of engagement in the climate issue. We wanted them not for their opinions — they're not climate scientists, after all — but for their curiosity. The idea was to have them ask tough questions, just as correspondents on 60 Minutes would. We didn't want this to be another 'one and done' documentary that would reach a limited audience. With so much at stake, we want to reach the broadest possible audience with a story that will continue to be compelling over many episodes and many years. Our correspondents, we hope, will help us get there.

What's the one thing that surprised you most about climate change?

The fact that our best scientists acknowledge they have consistently underestimated the pace and the impact of climate change. Well, here's another thing: I was shocked that in the three presidential debates of 2012, not one question was posed to the candidates about climate change. Twenty years from now, historians will look back on that with astonishment.

What are the practical steps that Americans — and others around the world — can take right now to help cope with this problem?

There are lots of energy-saving choices individuals, companies and government can and should make. But let's be honest: we'll need to do even more than that. We need a popular movement to demand that energy companies pay for the right to dump their garbage — toxic emissions — into the atmosphere and to demand that governments take steps to insure that most of the known reserves of coal, oil and gas be left where they are — underground and undersea. With a price on carbon emissions, energy companies will have a strong incentive to invest in clean energy instead of rushing to find even more fossil fuel reserves. If we don't shift to clean energy as quickly as possible, we're going to burn ourselves up.

Years of Living Dangerously debuts on April 13 on Showtime.

Here's an extended clip of the series premiere.

Editor's Note: Amos Hostetter is a Co-Producer of Years of Living Dangerously. He is also Chairman of the Board of GlobalPost.