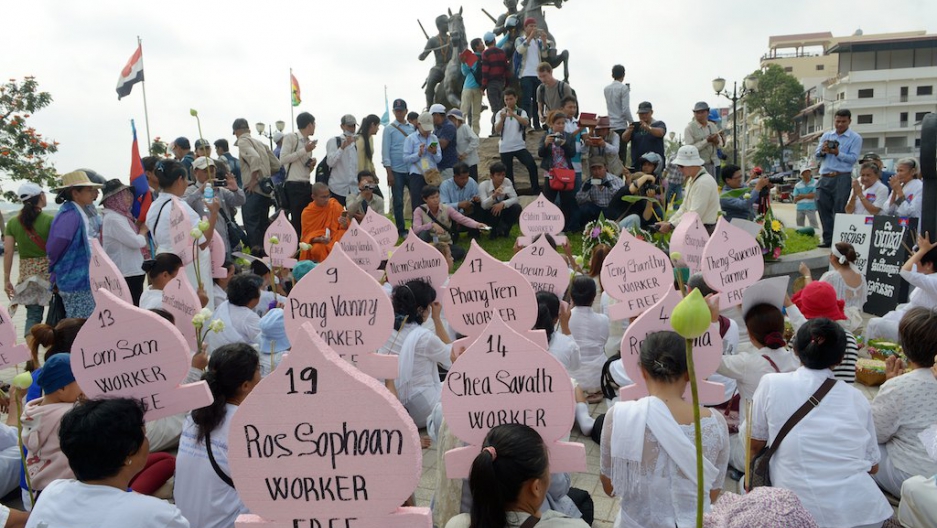 Cambodian activists pray during a protest in Phnom Penh on March 3, 2014. With low wages and workers fainting, they're mobilizing for better pay and work conditions.
Credit: Tang Chhin Sothy
Share

BANGKOK — It should have been an extraordinary scene: more than 100 factory hands fainting in unison as if possessed by spirits.

But in Cambodian garment factories, which play a major role in supplying American malls, mass fainting is no longer a freak phenomenon. It’s disturbingly common. The enigmatic problem is persistent despite waves of government studies, activist campaigns and vows to investigate factory conditions by global fashion empires such as H&M.

The latest mass fainting episode took place this month in a factory that, according to Reuters, supplies sportswear giants Puma and Adidas. Like other fainting outbreaks in Cambodia, it began with one worker falling ill and ended with more than 100 sprawled on the factory floor.

The companies told the news agency they were cooperating with authorities and closely monitoring the situation, and that the victims had received medical treatment.

This is 2014’s first major fainting incident. It probably won’t be the last. Government statistics suggest that, since 2011, between 1,500 and 2,000 Cambodian factory workers have fainted each year — often in groups of 100 or more. The laborers almost always recover after a short hospital stay.

The phenomenon hasn’t been ignored. The International Labour Organisation has looked into the causes of fainting episodes. European labor rights activists have flopped on showroom floors at H&M, Levi’s and Gap in protest. Cambodia’s government has dispatched officials to factories to teach workers how to stop fainting — essentially by urging them to eat better and sleep well.

Yet the exact triggers for mass fainting events remain mysterious.

A more scientific study by the non-profit, Cambodia-based Community Legal Education Center singled out malnutrition as the main culprit. Their research shows that roughly one-third of Cambodian garment workers — who are predominately female — come to work “medically malnourished” and eat only 1,600 calories per day.

An in-depth investigation by the Cambodia Daily newspaper tilts toward a related theory: mass hysteria, which has surfaced among underfed, overworked factory hands from 18th-century England to 1970s Malaysia. As one psychologist told the paper, Cambodians falling ill could be a “subconscious negotiation” for better conditions.

“First, I felt a headache and then it was hard to breathe ... then I couldn’t see anything and I fell down,” said Rorn, a garment stitcher who has repeatedly fainted, when interviewed by the watchdog agency Better Factories Cambodia. On the day following her fainting spell, she said, “I felt scared or panicked that I might fall down again. When I heard that other workers felt unwell, I lost consciousness again.”

This phenomenon is also playing out along not-so-silent protests in the streets. Workers agitating for better pay — a bump from about $100 to $160 per month — were violently dispersed by government security forces with armored vehicles and AK-47s in January. Five workers were killed.

Mu Sochua, an activist and parliamentarian-elect with the nation’s opposition party, called the protests a wake-up call to Western mall-goers who buy Cambodian-made clothes.

“You’re buying clothes from workers who faint on their garments,” Mu Sochua told GlobalPost at the time of the protests.

“Do you want to support international buyers who make billions while our workers are deprived of basic healthcare?” she said. “Or having decent clothing to look dignified? Or access to education?”

Clothes tagged “Made in Cambodia” are increasingly easy to find in American malls. The International Labour Organisation has named garment stitching the country’s “largest industrial sector” accounting for $5 billion in annual exports or 35 percent of GDP.

Cambodia is one of Southeast Asia’s poorest countries, a nation wracked by decades of war in the 20th century.

During the Vietnam War, when Cambodia become a hideaway for the Viet Cong, US bombers dropped more bombs by tonnage into Cambodia than all Allied Forces planes dropped during World War II. That nightmare helped give rise to the Khmer Rouge, a murderous regime that tried to transform Cambodia into a communist utopia through brute force.

All that destruction has left Cambodia in deep poverty. Only in the last decade has the country become stable enough to seriously industrialize — which has attracted the attention of fashion labels such as H&M, The Gap, Urban Outfitters and Nike. Their sneakers, blouses and hoodies are typically stitched in factories owned by Chinese or South Korean bosses who secure contracts with Western clothing firms.

The fainting phenomenon and bloody protests have lent a sense of turmoil to the country’s booming garment stitching sector, which now employs 400,000 workers. Protests are expected to continue until workers can secure their requested $160-per-month wage. Unions plan to revive the rallies later this month.