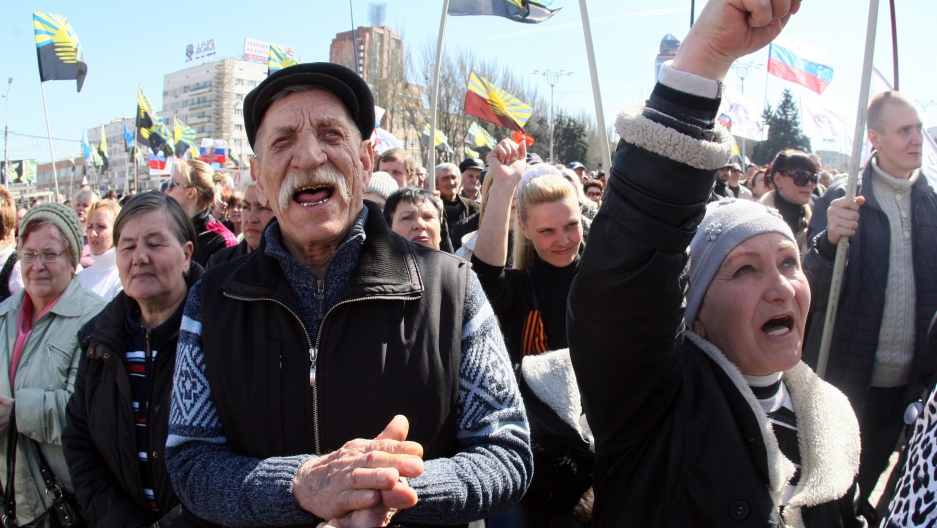 Pro-Russian protesters in eastern Ukraine worry the trade with Russia that sustains them is under threat.
Credit: Alexander Khudoteply
Share

STAKHANOV, Ukraine — On a grim, rain-soaked morning in this former industrial boomtown, a small crowd of working-class locals gathers under a hulking statue of Vladimir Lenin to air its grievances.

“The people in power today aren’t taking even the smallest steps toward calming tensions in our society,” says 51-year-old Oleksandr Kashparenko, a mustachioed, barrel-chested utilities worker. “They just don’t hear us.”

The revolution in Kyiv may be over, but in eastern cities like Stakhanov — an economically depressed city of around 100,000 in the pro-Russian heartland — discontent appears to be rising.

People here believe the new Western-leaning government in Kyiv, 450 miles to the west, rode in on a “fascist” coup facilitated by the United States and European countries.

While the authorities rush into Europe’s embrace, many in the blighted east, who rely on trade with Russia to survive, are looking on with increasing dismay.

If there were a perfect counterpoint to Kyiv’s months-long, pro-European protest movement — with its Facebook activists and video campaigns — it could be this grim outpost of smokestacks, machinery and crumbling apartment blocks.

Local residents who were part of ousted President Viktor Yanukovych’s support base pride themselves on the Soviet-style work ethic they say kept their region’s factories humming — and Ukraine’s budget fed — while Kyiv descended into revolutionary chaos.

It was here that coal miner Alexei Stakhanov caught the attention of the Soviet authorities in 1935 by supposedly mining 14 times his quota — 102 tons in less than six hours. His name was given not only to this city but also the Stakhanovite movement of “model” workers endlessly lauded in communist propaganda.

Whatever the truth about their actual accomplishments, they symbolized the transformation of obscure provincial cities like this one into showcases of Soviet industry.

“Say what you will about the Soviet past, but the miners were very respected,” says Viktor Tertychny, editor of the Stakhanov Banner, the city’s official newspaper. “It’s not for nothing they were called the ‘vanguard of the working class.’”

But when the Soviet Union collapsed in 1991, so did the vast political and economic network that supported Stakhanov, whose coalmines and factories shipped their products throughout the communist empire.

In the 1990s, all of Stakhanov’s four mines had been shuttered, thanks partly to a pervasive culture of corruption that drove inefficient and technologically backward operations out of business.

More than 15,000 jobs evaporated in the process, helping turn the city into a portrait of post-industrial depression.

Although a statue of Stakhanov, jackhammer slung confidently over his shoulder, still stands near the local police headquarters, the surrounding square is desolate.

Not a single new building has been built here in more than a quarter-century, Borisov says, because there’s simply no money to pay for it: There’s only one tax-paying worker for every three pensioners.

That’s because many able-bodied workers have fled the depression, the vast majority to Russia. And they’re still leaving.

“People don’t even sell their homes,” says Viktor Sinyaev, head of the local Communist Party branch. “They just don’t want to come back.”

Stakhanov now lives largely off its three remaining factories, including a railway car plant that provides up to 60 percent of the city’s budget.

Its continued survival depends on trade with Russia, which buys around 90 percent of its products, Sinyaev says. But Ukraine’s increasingly dismal relations with its Soviet-era ruler look set to jeopardize the close economic ties with Moscow.

Orders have already been cut back in recent months and workers laid off in droves. Already during the first three quarters of 2013, production was down by 40 percent compared to the previous year, local media report.

Now Stakhanov residents are cursing the Kyiv government for further jeopardizing their livelihoods by sidelining the industrial east.

Locals here and other cities across eastern Ukraine are calling for referenda in their regions to demand greater autonomy along with reforms to turn the country into a less centralized federal state. Others welcome annexation by Russia.

“Why didn’t they ask us whether or not we want to join Europe?” says Kashparenko, the utilities worker. “It’s not about our close ties to Russia, it’s about unbreakable ties.”

Economic factors account for only part of the worry.

People here also resent what they see as the Kyiv government’s nationalist overtones, a fear fed by a heavy-handed Russian media propaganda campaign.

It’s making Ukraine’s revolutionary authorities out to be gun-toting extremists funded by the West and aiming to repress the country’s Russian-speaking population.

More from GlobalPost: Why eastern Ukraine fears the new regime in Kyiv: A fisherman's tale (VIDEO)

While certainly exaggerated, there’s truth behind claims that the government is growing increasingly concerned about separatist sentiments in the east.

Last week, Oleh Lyashko — a visible if marginal pro-Kyiv politician — showed up with several associates in Luhansk, the closest major city to Stakhanov, where he physically abused a pro-Russian activist for allegedly advocating separatism.

Some Stakhanov residents claim they’ve been harassed by the local pro-Kyiv security services for protesting against the government.

“No one here chose them,” she adds. “They appointed themselves.”

Borisov, the affable mayor, says the only way to calm such emotions is to create more jobs and boost the standard of living.

But doing that anytime soon is only wishful thinking, he says. “Today we simply can’t do it.”