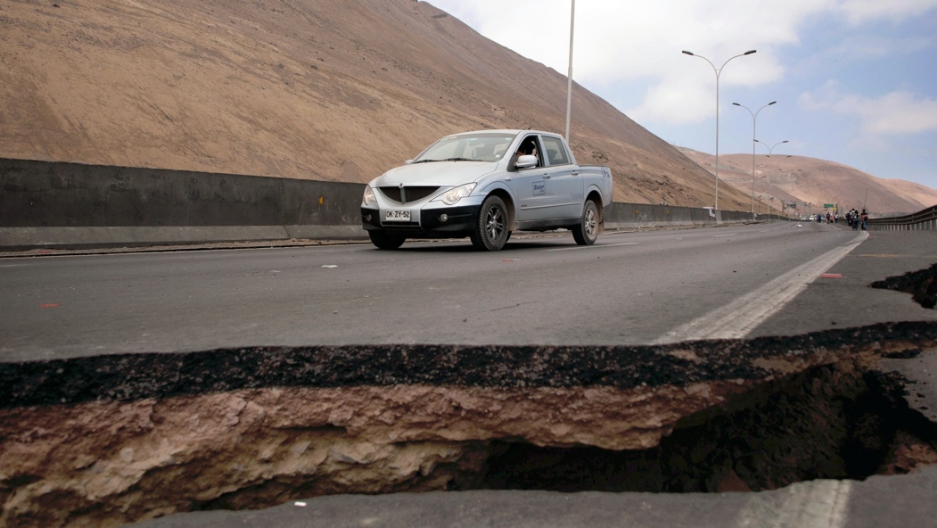 Update: On Sept. 16, 2015, a powerful magnitude 8.3 earthquake struck off Chile's coast, killing at least eight people, triggering large waves and forcing a million residents to evacuate. This article was originally published April 2, 2014, after a quake of a similar size.

LIMA, Peru — The magnitude 8.2 earthquake that shook Chile on Tuesday evening, prompting a brief tsunami alert across the Pacific, will not be the last major temblor hitting South America.

Just like San Diego, Los Angeles, San Francisco and Seattle, the region’s entire Pacific Coast sits on some of the world’s biggest seismic faults. Experts warn it’s just a matter of time before more quakes, including even bigger ones, strike. Here are some key factors at play.

Tuesday's quake hardly came as a surprise. Seismologists recorded hundreds of minor tremors in recent days. And in the wee hours Wednesday night, a hefty magnitude 7.6 "aftershock" jolted Chile once more. But that may be the least of it. Chile actually has a good claim to being the most earthquake-prone country on Earth: It recorded two of the world’s 10 biggest temblors, including the record magnitude 9.5 in the south of the country back in 1960. And more than 500 people died in an 8.8 shaker in 2010, during the final days of Michelle Bachelet’s first presidency. She took heavy flak over her government’s handling of that disaster, in which officials failed to issue accurate tsunami warnings and downplayed the danger, even though a major tidal wave ravaged the Chilean coast. Bachelet’s just taken office again and has been quick this time to show she cares, and was due in the northern port of Iquique, near the epicenter, later Wednesday.

The Pacific's Ring of Fire is a hotbed for seismic and volcanic action. (Wikimedia Commons)

Chile may be the most vulnerable — so far — but the entire Pacific Rim is easily the world’s most seismic region. Known as the Ring of Fire, its fault lines run up the entire western coast of the Americas, from Patagonia to Alaska, and then heading southward again below the eastern Pacific, eventually ending between Asia and Australia. Of the 10 most powerful quakes listed by the US Geological Survey (USGS), all but one took place around the Ring of Fire. That accurately reflects the numbers, with 90 percent of all the world’s tremblers taking place here. The Ring of Fire is also home to most of the world’s active volcanoes.

The Chile quake measured 8.2 on the moment magnitude scale — a more comprehensive system that’s largely replaced the Richter scale — making this a huge temblor by any standard. But the scale is actually exponential. That means that despite the high score of Tuesday’s quake, the 9.5 that ravaged Chile just over half-a-century ago was really about 20 times bigger in magnitude and nearly 90 times stronger in energy release, by the USGS's calculation. Humans cannot even feel a quake measuring 1 on the scale. But a 6 would be the equivalent of 15,000 tons of TNT — the same force as the Little Boy atomic bomb dropped on Hiroshima. An 8 equals 15 million tons of TNT.

An earthquake’s score on the magnitude scale is just one of many factors that determine how much havoc it wreaks. The distance from the epicenter is another fundamental factor in determining how powerfully a community will feel the tremor. But the way the Earth moves is also critical. Chile’s latest quake reportedly generated 7-foot-high waves but failed to cause a major tsunami like the one that slammed Japan in 2011, despite its epicenter being out at sea, because the movement was horizontal rather than vertical, Oregon State University expert Solomon Yim told National Geographic. But take Mexico City’s disastrous 8.1 temblor of 1985. Despite its epicenter hundreds of miles from the capital, it did major damage, killing up to 40,000 people. That’s because it lasted a long time and the soil of the dried lakebed, on which Mexico City is built, amplified the shaking. Construction technique is also critical. Chile now has strict seismic construction codes. However, in neighboring Peru, which is also highly prone to quakes, building laws are more frequently flouted. According to one recent estimate, an 8.5 shaker could bring down half the homes in the capital, Lima, a city of 9 million people.