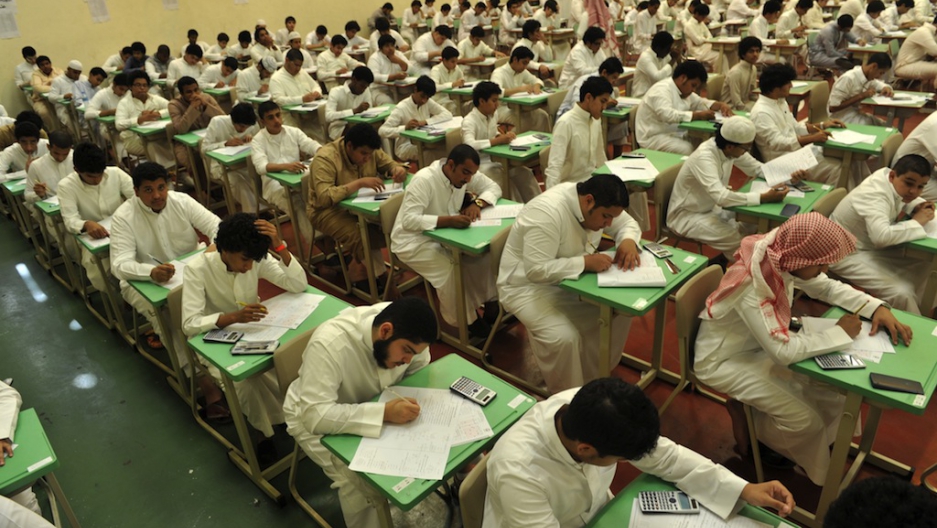 Saudi students sit for their final high school exams in the Red Sea port city of Jeddah on June 19, 2010 at the end of 2009/10 school year.
Credit: AMER HILABI
Share

When President Obama was with Saudi Arabia's 90-year-old King Abdullah yesterday their discussions had a lengthy agenda touching on virtually every major global security and energy issue at this incredibly tense and insecure moment in history.

Syria topped the bill. The king and his ministers have been frustrated by the administration's reluctance to join them in arming Syria's rebels.

One thing that was definitiely not discussed was the religious hatred against Jews and Christians that still features in Saudi textbooks.

For some who follow the issue closely that was a mistake.

In the wake of the 9/11 attacks attention was focused on the hatred young Saudis learn at school for Christians and Jews. There was a tremendous amount of official pressure put on the Saudi government—the al-Saud family—to edit out the offending passages in school books.

While there has been some progress in bringing a degree of tolerance to Saudi textbooks, many still have passages like one twelfth grade monotheism book that claims God made Jews out “of swine and apes.”

The same book describes Christians and Jews as “the worst of creatures” who “will dwell in hellfire,” according to a report by Dr. David Weinberg, senior fellow at Foundation for Defense of Democracies.

Weinberg said the problem with Saudi textbooks is a long standing one. For more than a decade, the Saudi government has been saying they are fixing the problem, he pointed out, “Where’s the progress?”

In the hope of getting the issue at least some notice, Weinberg published a paper this week asking why the State Department refuses to publish its most recent study of Saudi textbooks, a study that was completed back in 2012.

Point out that keeping things private is the way the State Department always deals with questions about the Kingdom of Saudi Arabia and Weinberg shoots back, “They have had more than a decade to work on this issue in their prefered softly, softly style. Where is the progress?”

In Weinberg's view, and many others in Congress there hasn't been nearly enough change.

There has been progress, according to Douglas Johnston, president of the International Center for Religion and Democracy, the think tank that compiled the study.

“Year by year since 2010 the Saudis have been taking the old textbooks out of three grades at a time and replacing them with new ones,” Johnston said. “It has made a notable difference, but its not a clean bill of health.”

He does acknowledge the problem with high school textbooks, like the ones quoted above, and said they will be the last to be replaced.

There are 33,000 public schools in the Kingdom with about six million students.

The schools are not secular. The textbooks are used to teach Islamic definitions of citizenship.

The books are also used abroad. “Exportation of these books heightens their significance,” said Weinberg.

The texts are a great concern for policy-makers concerned about stopping the spread of jihadism.

The books have made their way to Europe. In Britain they are used to teach at Muslim clubs and at Islamic faith schools.

David Goldberg, a retired rabbi wrote about the phenomenon in The Guardian several years ago.

Today, he said, “There are always people who read this stuff and it will confirm their irrational prejudices about Jews.”

Of course, prejudice is not learned simply from a textbook, Johnston noted.

“You can have a text that is chaste as Caesar’s wife but if a teacher has his own bias that will be much more influential on students.”

That is the heart of the matter. There is a constellation of prejudice that surrounds the average young Saudi. Family and teachers have much greater influence than textbooks. The fact that so few Saudis travel outside the Muslim world reinforces any hatred they grow up with.

They live in a country where the other Abrahamic faiths are effectively banned. The Salafist religious establishment exercises power over social life. They learn that institutions like the American Universities of Cairo and Beirut are crusader institutions, an instrument of Christian expansionism.

Even if you re-wrote all the textbooks to preach religious tolerance, there would still be powerful social forces teaching young people bigotry.

Johnston accepts that progress is slow but says the view in Washington that King Abdullah could pick up the pace if he wanted to is false. “There’s a delicate balance of power between government and the religious establishment,” he said. “The King is genuine in his wishes for reform but has to take their views into account.”

Johnston’s view is backed up by professional diplomats in the US and Europe.

But for Weinberg, a dozen years after the first Saudi promises to stop teaching hatred in their schools, it is time for the US government to speak out bluntly and tell the Saudis, “Don’t prioritize hate in your textbooks.”