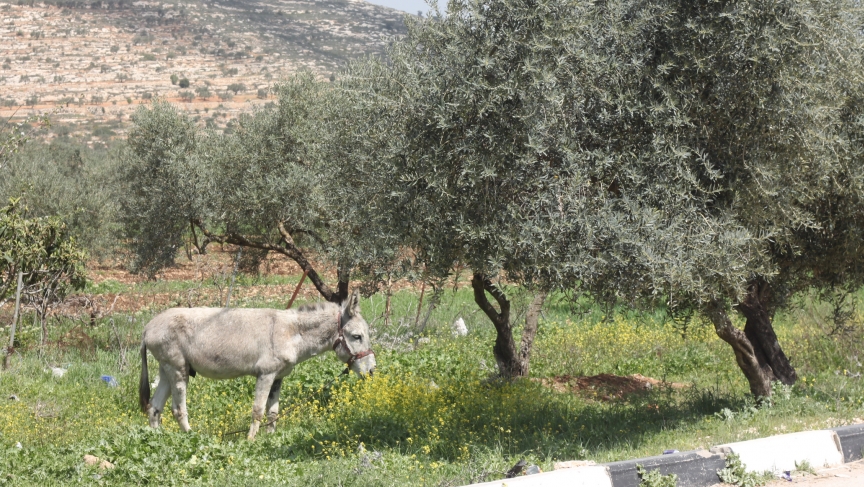 An Israeli settler tried to steal a mule, like this one, from the Palestinian village of Luban.

A few weeks ago, in a West Bank olive grove, someone tried to steal a mule.

The incident may seem way too trivial to even bother mentioning. It didn’t make headlines when it happened.

But in the West Bank, an event like this quickly becomes a very high stakes game. And that offers a glimpse of life against the backdrop of one of the world’s most intractable conflicts.

Current US-sponsored peace talks to end the Israeli-Palestinian conflict are scheduled to end next month, with no sign of progress toward one of the talks’ main goals: ending the Israeli occupation of the West Bank and creating an independent Palestinian state there.

So in the meantime, what’s happening on the ground in the West Bank? Small-scale incidents like the attempted mule theft earlier this month near Lubban, a Palestinian village surrounded by Israeli settlements on nearly every hilltop.

Ghassan Daghlas, a Palestinian official who monitors Israeli settler activity in the West Bank, said he got a call around 11am that a farmer near Lubban had caught a settler trying to steal his mule.

“The settler was in a car, driving,” Daghlas said. “He saw a mule tied up to a tree. He thought he would steal the mule. He could get on the mule and ride it [back to his settlement up the road.]”

But the Palestinian farmer caught the settler, put him in a car, and telephoned his village council. Soon, a whole group of villagers were surrounding the farmer’s car with the settler inside. When Daghlas arrived, he called Palestinian liaison officials, who called their Israeli army counterparts, who soon arrived.

One villager used his cell phone to film as the farmer told the soldiers what happened. The trespassing settler, the farmer said, was named Zohar and was approximately 20 years old. “I told him, ‘Zohar, I want to put you in my car, you are like my son, do not be afraid,’” the farmer said on the video.

The Israeli soldiers escorted the settler out, unscathed. End of story.

The same thing happened a few months ago close to the nearby village of Qusra. A group of settlers in their late teens and 20s were seen attacking Palestinian farmers in broad daylight.

Palestinian villagers caught them and beat them up, but another group of Palestinians put the kids on the roof of a house, gave them bandages and water, and despite a gathering mob, made sure no one harmed them further. Palestinian officials called Israeli soldiers who escorted the settlers away.

The residents of Lubban have every reason to be angry with Israeli settlers. In 2010, settlers were suspected of torching a village mosque and olive trees. In 2012, a soldier and two Israeli women were arrested for spray painting “Mohammed is a pig” on a village home.

Capturing someone in the act, however, is rare. Nabbing the mule thief was like the occupied trapping the occupier, the mouse catching the cat. It showed a strategy that Palestinian officials are trying to enforce.

“If a problem erupts, we need to announce it through the mosque declaration system. The whole village will know about it,” Daghlas said. “Secondly, everyone should gather. We need numbers to combat such a situation."

For Palestinians, this is a strategic move, said Daghlas. Whenever Palestinians have harmed or killed settlers, he said, revenge attacks occur and new settlement outposts are built.

“Our people are aware of the repercussions and the punishments that would fall on their heads if they were to use violence,” Daghlas said.

Settler attacks can happen as frequently as every week, said Sarit Michaeli of the Israeli rights group Btselem. These spontaneous vigilante groups — neighborhood watch-style — are the only real way Palestinians can protect themselves from settler attacks, she said, because the Israeli security forces aren’t doing their job properly.

“Each and every incident seems minor. I mean, it’s one car here, one olive grove there,” Michaeli said. “But if you view the series of attacks that have been perpetrated against Palestinians in specific areas, every single incident contributes to a very, very large picture in which people are living in places where they have no protection.”

The Yesha council, the West Bank settler organization, condemns these attacks. But Dani Dayan, a leader of the settler movement, also chastises the Israeli security forces for failing to prevent and prosecute settlers who commit the attacks.

Dayan said he has met with Israel’s attorney general, the police inspector general, the head of the Shin Bet clandestine security service and the army officer in charge of the area.

“I begged. I would say I demanded of them to be more harsh, and first and foremost to be more effective,” Dayan added. “I don’t have an intelligent answer to the question why and how our law enforcement agencies are so unsuccessful.”

The Israeli police said it formed a unit last year to thwart the phenomenon, and Dayan said it did help somewhat.

But over the past eight years, according to UN figures, the annual rate of Israeli settler attacks has almost quadrupled.

That sometimes leaves Palestinians feeling that their only recourse is taking law enforcement into their own hands.