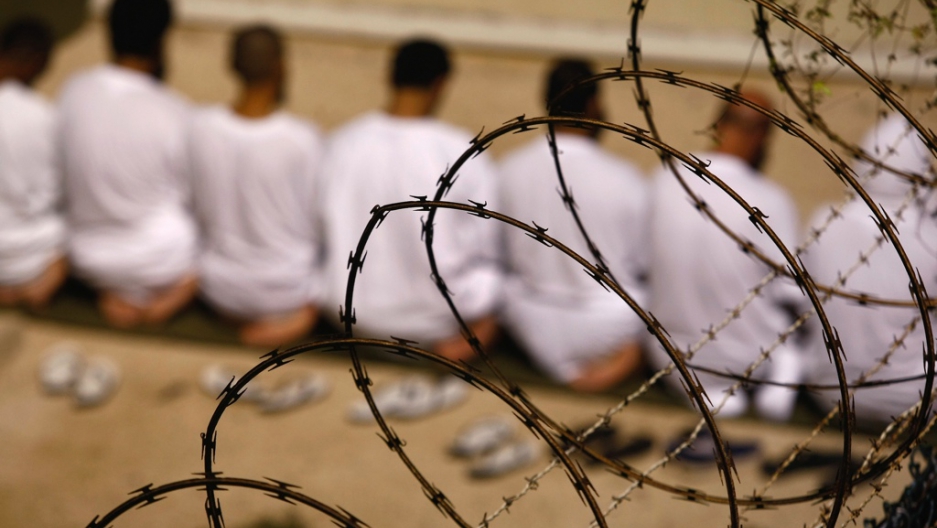 A group of detainees kneels during an early morning Islamic prayer in the US military prison at Guantanamo Bay.
Credit: John Moore
Share

MONTEVIDEO, Uruguay — President Jose Mujica has stunned residents here by accepting a deal proposed by the United States to give refuge to five prisoners from the Guantanamo Bay detention center in Cuba.

Since Mujica’s sudden announcement last week, there’s been some confusion about what’s happening with the prisoners.

Mujica told local reporters March 21 he would ask the US government to free Cuban political prisoners in exchange for Uruguay accepting the Guantanamo detainees.

But the US ambassador to Montevideo said the two governments have yet to reach an agreement — and she dismissed the idea of an exchange outright.

“There is no exchange arrangement of any kind,” Ambassador Julissa Reynoso told local media. “The proposal is a humanitarian act to be able to manage the transfer of these individuals to different parts of the world, without conditions.”

Mujica has also since said the released prisoners would be free to travel onward from Uruguay, raising further questions about how such a deal will be crafted.

The president is a former political prisoner himself, having survived 14 years in prison stemming from his activities as a revolutionary in the 1960s and 1970s. He and other leaders in Latin America and the world over have consistently pressed Washington to close Guantanamo.

What we do know with some degree of certainty is the identity of the Guantanamo detainees who would move to Uruguay.

A senior US government official told GlobalPost he couldn’t confirm or deny that these five men are the prisoners who would be released.

The plan in the works is part of President Barack Obama’s pledge to close Guantanamo Bay in 2014.

According to the website Closeguantanamo.org, which tracks the facility's prisoner population, 615 of the total 779 detainees have been released or transferred, 83 of them since Obama took office. An additional 154 prisoners remain incarcerated, according to the website. (Nine others have died, while one detainee was moved to the US for trial.)

Secret US government documents made public by WikiLeaks provide ample information about their identities. GlobalPost put together this guide to who the detainees are and how they ended up at Guantanamo, along with links to a bit of extra reading and the WikiLeaks files on each detainee.