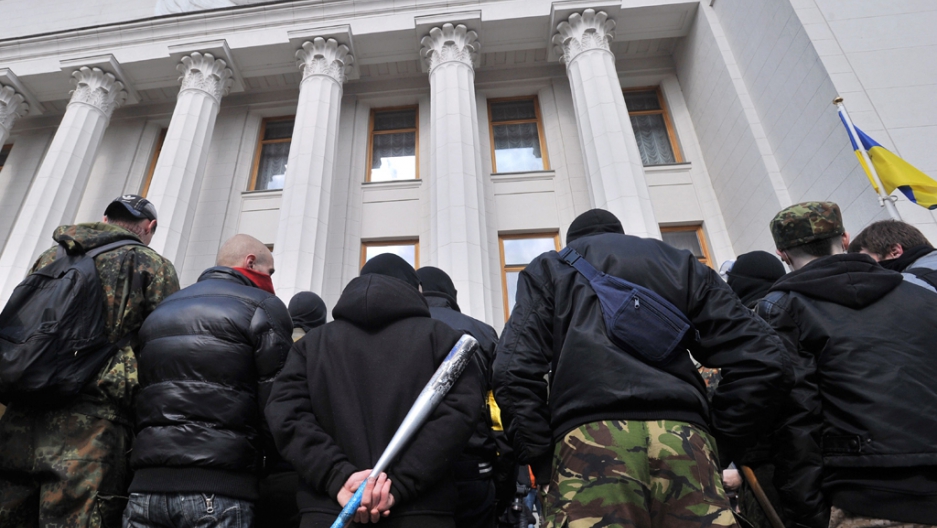 Supporters of the right-wing nationalist party Pravy Sector (Right Sector), one of them carrying a baseball bat, protest in front of the Ukrainian Parliament in Kyiv on March 28, 2014.
Credit: GENYA SAVILOV
Share

KYIV, Ukraine — A paramilitary group that played an important role in removing Ukrainian President Viktor Yanukovych last month is now in a confrontation with the revolutionary government in Kyiv.

Pravy Sektor, or Right Sector, a nationalist group formed by right-wing demonstrators on Kyiv’s central Maidan, or Independence Square, in December, picketed the country’s parliament on Thursday amid tension with the government following the slaying of a party leader.

Police shot and killed the head of Pravy Sektor in Western Ukraine earlier this week in unclear circumstances. The group is demanding the interior minister resign over the incident.

The nationalists’ challenge to the government comes after the paramilitary group announced it was purging extremist elements and adding a political party to its combat brigades.

The newly constituted party says its ideology is nationalist, not fascist or neo-Nazi — which means it wants Ukraine to be the master of its geopolitical destiny, and not the servant of larger powers such as the European Union or Russia. Publically, at least, it advocates “brotherliness” to the country’s minorities, including Russians and Jews.

On that platform, Pravy Sektor's leaders want to grab power at the ballot box across Ukraine — and to see leader Dmitro Yarosh elected president in May’s poll.

“Losing is not an option,” Pravy Sektor spokesman Arten Skoropadsky said in the lobby of party-occupied Hotel Dnipro. “Over the last two months we have grown from a small social organization to a national force. Ten thousand people have now said they are willing to join.”

More from GlobalPost: A Who's Who of the key figures and groups in Ukraine's political crisis

Until recent days, Pravy Sektor’s reputation as an apparently effective enemy of Yanukovych has won it support in Kyiv — including from protesters aligned with the new Ukrainian leadership.

During the winter demonstrations, protesters say, Pravy Sektor proved an agile force that was able to largely maintain security at the Maidan encampment and spearhead protesters' attempts to storm police lines and capture new ground in downtown Kyiv.

“They were organized and effective — they always carried out every task we gave them,” said Danielo Klech, the head of the Maidan self-defense committee, which is close to interim government National Security Council head and former Maidan commander Andrej Paruby.

Although Pravy Sektor helped bring the current government to power, since Yanukovych’s departure, the party has become a de facto challenger to the former parliamentary opposition leaders who are now in charge.

“We need to clean out everyone,” said Alexander Konomko, a militiaman in Pravy Sektor's 23rd brigade on Maidan.

“We need to change the political system — they are trampling the bodies of the dead.”

Questions remain about the group's history of anti-Russian activities. Russian media says presidential hopeful Yarosh fought in Chechnya during the first war there in the 1990s. Other party leaders are also rumored to have served among the forces there fending off Russian advances.

Pro-Russian activists in the country's second city, Kharkiv, accuse members of Pravy Sektor's local branch of prompting ethnic conflict by drafting what they see as a group of neo-fascists from the central city of Dnepropetrovsk to attack pro-Russians in recent weeks. Pravy Sektor blame persecution by pro-Russian activists — a group including bikers and the self-proclaimed Russian fight club "Oplot" — for the ethnic unrest in Kharkiv. Locals partly support their version of events.

“If [the nationalists] are freed ... it will cause massive unrest,” says Alexandr Alexandrovskiy, a political consultant to Yanukovych's Party of Regions. “This is a neo-fascist organization.”

Pravy Sektor's stance toward the Kyiv interim government has also been criticized. The party has pushed the authorities to be firmer with Russia in Crimea. Government supporters say that risks provoking an escalation of the crisis.

“They should not put as much pressure on the interim government,” said Klech, from the Maidan self-defense committee. “Right now, they are making ultimatums to the government to storm or capture something. Those tactics were suited to Yanukovych's time, but they aren't suitable now.”

Pravy Sektor's electoral appeal remains as uncertain as its future. However, straw polls conducted in Kyiv suggest a level of admiration if not support for the group.

“If it wasn't for Pravy Sektor we'd still be sitting on Maidan,” says Svetlana Klitskaya, who attended a meeting on the square last Sunday. “But they are not competent politicians — and they are too radical.”

Kyiv's Maidan revolution began last November with a call by an Afghan-Iranian journalist, Mustafa Nayem, for people to take to the streets in support of the European Union after Yanukovych refused to sign a political and economic pact with the organization.

More from GlobalPost: 26 things found in Yanukovych's compound that make him look even worse

In the final days of his regime, protesters clamped on helmets, carried shields and fell to police bullets — and Pravy Sektor was prominent among those facing down riot police.

But it remains unclear in these post-revolutionary days how the paramilitary group intends to transform itself into a political movement, and to what end. Leaders have made a broad vow to maintain the party’s paramilitary brigades so long as Ukraine faces “external or internal enemies.”

“A political party is a weapon of political struggle,” Pravy Sektor's Kyiv head Igor Mazok said at the party’s media launch, “like a Kalashnikov is an instrument of military struggle.”