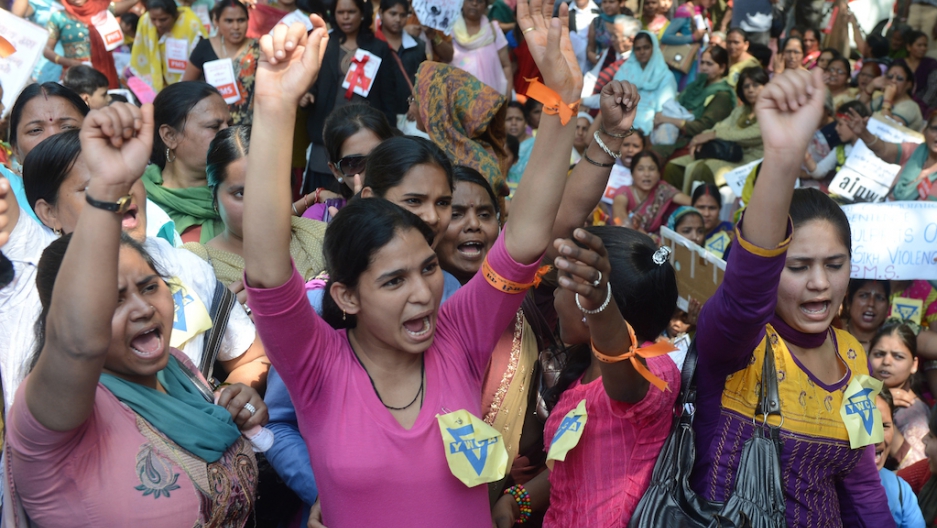 Indian women march to parliament on International World Women's day in March 2013, demanding death to five men who raped and killed a student in a bus in December 2012. Whether or not the outrage has permanently changed India, it has clearly changed India's wildly popular telenovelas.
Credit: Raveendran
Share

DELHI, India — Off screen: A young physiotherapy student is gang-raped on a public bus as it races through Delhi’s crowded streets. Widowed women in Vrindavan are cast out of their family homes. A girl in West Bengal is set on fire for falling in love with a man from a different faith. A persistent dowry system makes women akin to a marriage market price tag.

That’s the brutal reality for some Indian women in the 21st century.

Now here’s the fictional version, on screen: A husband helps his wife become a policewoman against the family’s wishes. A child bride becomes a respected voice of reason in her family. A modern woman questions wearing the traditional head veil in her husband’s new home. A female doctor holds a position of power in her town.

Optimists contend that India is a country in transition. Particularly in the months after the 2012 Delhi gang rape, headlines screamed, feminists organized, politicians promised change — at times it seemed as if the whole country was demanding a new future for its women.

India’s television serials are ubiquitous and wildly influential, bringing families of every background together every night. The industry is double the size of Bollywood, the world’s most prolific for film. Serials reach about 246 million households.

For some producers and screenwriters, that reach comes with responsibility.

While women have been at the forefront of many serials, industry professionals say the heightened gender dialogue catalyzed a conscious effort to portray empowered women on the small screen.

“If the lowest stratum listens to what we have to say more than politicians, more than news, just imagine what level of onus that puts on you,” said Kovid Gupta, a screenwriter who worked on several Hindi serials in Mumbai.

He said until recent years, women in television serials were often limited to traditional daughter-in-law roles or romantic plot lines. Working on scripts for shows during the aftermath of the Delhi gang rape, Gupta said there was a noticeable, if subtle, shift in how female characters were written and portrayed.

He cited “Diya Aur Bati Hum” — one of today’s leading series — about a woman who defies her traditional family to join the Indian Police Service, eventually with the support of her husband. Another example is a popular show Gupta worked on, "Balika Vadu," depicting a girl forced into marriage at the age of eight. Child marriage still exists in some rural areas like southern Rajasthan, despite a national law against it.

“I disagree that we’re just here to entertain — if we’re not driving social change, we’re not doing our job,” Gupta said.

Using television as a medium for progressive messages isn’t exclusive to India. As journalist Sarika Bansal wrote in an opinion piece for The New York Times, countries like Kenya and Mexico have employed creative broadcasts and telenovelas to change mindsets about health and education.

In India, these efforts appear to be having an impact.

Shabana Ali, a community educator, said that the progressive messages are reaching many young women and men in Charminar, a historically traditional and Muslim part of India’s southern city of Hyderabad.

On a hot March afternoon, Ali visited public schools tucked among the narrow streets to conduct team-building sessions. One playful, rowdy session involved a class of eighth-grade girls clad in uniform hijabs, or head scarves worn by Muslims. Ali said they were often the first women in their families to be educated past elementary school.

They are also avid watchers of television serials.

“Through these shows they’re learning something. They’re understanding what not to do, and how women can be,” she said.

Even so, Ali said the girls often watch shows secretly because their parents disapprove of some of the less-traditional themes. The ones they hide, she said, are usually the shows that have the best messages for educated women.

The industry is aware of its boundaries when producing a show that reaches the most conservative of Indian families, said Radikaa Sarathkumar, founder of Radaan Mediaworks, which has produced several popular serials in the south Indian Tamil language. But that doesn’t mean they compromise characters.

Sarathkumar is no stranger to creating strong women for TV. One of her shows, Chithi, which debuted in 1999, ran for over 10 years and featured Sarathkumar herself in the leading role as an evolving woman who emerged confident and independent after a troubled past. “I wanted to a show a strong woman who was equal to any man,” she said.

Since then, the Chennai-based entrepreneur said she has made sure that her female characters reflect women in modern day India, not just the stereotypes still prevalent in the media. And she believes in the industry’s ability to continue empowering women both on and off screen.

“People are inspired and they say ‘yes, we can change a few women like this,'” she said.