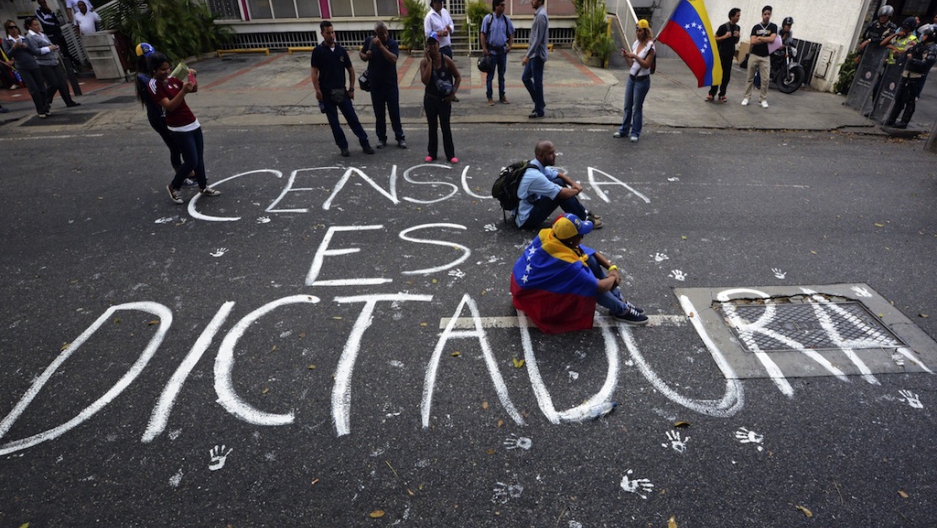 Students sit on the pavement reading "Censorship is dictatorship" during an anti-government protest in Caracas on February 17, 2014. Venezuelan President Nicolas Maduro on Sunday accused Washington of plotting with anti-government protesters and expelled three US diplomats in retaliation.
Credit: JUAN BARRETO
Share

Venezuelans have never been less informed by traditional media than during the recent wave of protests that began in early February.

Newspapers don’t have access to the dollars they need for buying paper, because the government restricts the flux of dollars through a currency exchange control, so they have reduced their print editions virtually to newsletters.

The country’s major television and radio station circuits either maintain an editorial line that is uncritical towards the government, or are directly under its control, as the public media have been for years.

In mid-February, President Nicolas Maduro expelled the Colombian information channel TNT24 and CNN in Spanish for their coverage of the protests, accusing them of being part of a conspiracy to overthrow him. Now, this increasing tendency to control information is being exacerbated by one of the oldest and most effective methods: censoring reporters directly.

Last week an article was censored in Últimas Noticias, the largest newspaper in the country. Written by Laura Weffer, a respected investigative journalist, the article dealt with the protagonists of the violent protests in Caracas.

The piece, titled "What's behind the guarimbas," showed that, in terms of age and social background, there were no major differences between the masked youths protesting against the government by building barricades and throwing rocks and gas bombs, and the officers of the National Guard who repress them by spraying plastic buckshot and dispensing tear gas.

The article reports that demonstrators and National Guardsmen alike say that they are fighting for Venezuela and are suffering from the same everyday burdens caused by the economic crisis, such as shortages and inflation.

Although the last decade has seen the largest oil windfall in Venezuela’s history, the country’s tortured economy is going through one of its worst crises. Inflation is 57%, the highest in Latin America. Severe shortages in basic food staples such as milk, chicken and cooking oil, not to mention electricity, diapers, and auto-parts, keep people lining up for long hours in front of empty shops.

The country is also one of the most violent in the world. In 2013 alone, there were 24,700 homicides, Most of the victims are young men between 18 and 25 years of age, according to the Venezuelan Observatory of Violence.

The opposition is politically frustrated. Although it has almost half the total vote, its political impact is virtually nil. All these elements fuel the passion and determination of demonstrators, who have taken to the streets in revolt, not just to challenge the government but also to recover a sense of a future.

But they the conditions of sparcity, as Weffer wrote, are felt by members of the National Guard as well.

"I spent the same amount of time with the masked youths and the National Guards,” she said. “Apart from the fact that one group wore masks and the other armored uniforms, they could have changed places. When I realized this, I intentionally decided to treat them equally.”

The censorship of Weffer’s article led to the resignation of the head of the research team at Últimas Noticias. But it also had a boomerang effect: When the piece, shrouded in scandal, was filtered to the social networks it created a much greater impact than it would have had, had it been printed in the newspaper.

This is all happening at a time when the government is watching Últimas Noticias very carefully, since the network exposed the direct involvement of security forces in the killings of Bassil Da Costa and Juan Montoya—the first two casualties of the current revolt.

Últimas Noticias is also the latest commodity in a series of purchases of Venezuela’s major media groups made by boligarcas—Bolivarian oligarchs and businessmen closely linked to the government.

In late February, David DeLima, a former governor who has been accused of corruption, was named president of the Cadena Capriles conglomerate that owns Últimas Noticias. In his first meeting with the employees of the Cadena Capriles, De Lima said he represented an alliance of businessmen, but when asked who they were, he refused to name them.

He also said the front page of the newspaper would no longer be used to disseminate the opposition’s plans for a coup.

In his Sunday column, Eleazar Díaz Rangel, director of Ultimas Noticias, who openly sympathizes with the Chavista government, pointed out that he had censored Weffer’s article, already formatted, because it didn’t meet the assignment guidelines and was "a celebration of the guarimba"– a Venezuelan word for the barricades of debris and burning tires set up to block traffic.

Díaz Rangel defended the act of suppression, explaining that those who act against the law and those who preserve it could never be considered equivalent, and arguing that journalists from the research unit had used the episode to attack his "honest journalistic career."

However, according to a knowledgeable source, the censorship occurred because Weffer did not bend to pressure from above to condemn the opposition protests, and because the government put pressure on Díaz Rangel to tone down the paper`s denunciations.

The idea of media repression, however, is not entirely new. During late-President Hugo Chávez’s long era, many pressures beset journalism.

In his first term, Chávez exercised his muscle power against critics by barring Teodoro Petkoff, editor and prominent left-wing politician, from directing El Mundo, another newspaper owned by Cadena Capriles.

Venezuelans later learned that the former president’s threats against media barons were to be taken seriously when he withdrew the operating license of Radio Caracas Television, the oldest and largest broadcaster in the country, in May 2007 for its participation in the media blackout during the coup against him in 2002.

Chávez took private media, and consequently independent journalism, to be the public arm of the economic power that opposed his revolutionary plans.

There was continuous and direct confrontation between the known-charismatic leader and the media owners. That strategy always allowed him to tighten control over the country by suppressing journalistic inquiry into his government.

His dream was to establish media hegemony as the antidote that would neutralize all journalistic conspiracies.

He invested millions of dollars in creating a government media platform to spread information about the success of his favorite brand: 21st century socialism.

When the media owners rebelled against his mandate, he simply expropriated the media or used the Supreme Court to keep them in check, via fines amounting to millions of dollars.

In his time he closed dozens of radio stations, passed restrictive laws and constantly harassed journalists. But until just over a year ago, you could say that while the Chavista government stifled freedom of the press inexorably, it did so in slow motion. Today few have doubts that the plan was to annihilate it.

In his year in office, Maduro has been both subtler and more brutal than Chavez. He allowed “boliburgueses”—corrupt millionaires—to buy the small but combative news channel Globovision, once considered the last bastion of the opposition, which, of course, tamed the channel's criticisms of the government.

He also promoted (or allowed to continue) the witch-hunt of publishers and editors, such as Teodoro Petkoff, publisher of Tal Cual, and Meli Luz Reyes, editor-in-chief of 2001.

Maduro has also taken steps to strip away freedom of speech and eliminate a free press by creating the Strategic Center for Security and Protection of the Homeland (CESPPA), with the power “to declare as confidential, classified, or of limited access any information, fact, or circumstance [the agency] becomes aware of in the fulfillment of its duties".

The Instituto Prensa y Sociedad (IPYS), a watchdog NGO for journalism in Latin America, reported 93 violations against press freedom between the beginning of the protests in early February and March 20th, and accused the government of carrying out a "systematic campaign to discredit journalists and national and international media.”

There is little doubt that the increasingly hostile climate for journalists in Venezuela has made it such that, as Laura Weffer said, journalists are doing their work in a minefield.

But despite having been targeted for censorship, she said she decided to stay with Últimas Noticias, “because, as a Venezuelan saying goes, the only way to fight is by fighting."