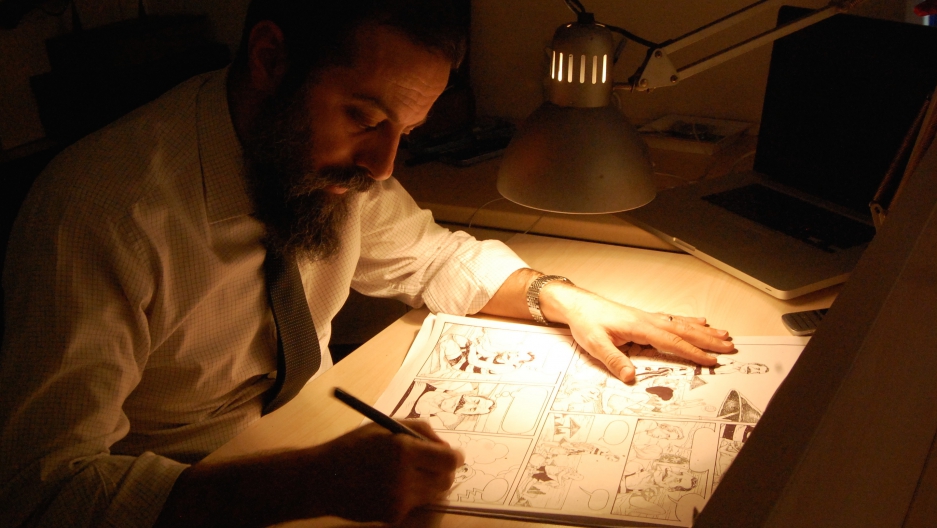 ISTANBUL, Turkey — As Turkey prepared this week for municipal elections amid a high-level corruption scandal, news stands across the country were topped by a front-page cartoon of a man standing nervously at a ballot box.

“This is all I could scrape together,” reads a thought-bubble above his head as he stuffs the box with cash.

The elections on March 30 are widely seen as a plebiscite on Turkey’s embattled ruling party of Prime Minister Recep Tayyip Erdogan, which has responded to allegations of corruption with a media crackdown. Last week, the government blocked Twitter and Erdogan said Facebook and YouTube would likely be next. YouTube was blocked as of Thursday afternoon.

Even before the move against social media sites, Turkey had fallen nearly to the bottom of Reporters Without Borders’ 2014 Press Freedom Index, clocking in six spots behind Russia at 154th out of 180 countries. Belarus, the so-called last dictatorship in Europe, narrowly beat out Turkey for the worst press freedom ranking on the continent at 157.

With social media restricted and mainstream media increasingly co-opted, Turkey’s humor magazines have once again become one of its last vestiges of written dissent, said Ersin Kalaycioglu, a professor of political science at Sabanci University.

“Even under military dictatorship in the ’60s, ’70s and ’80s, the cartoon magazines came up with the most abrasive and most effective criticism of the government,” he said.

But Turkey’s tradition of political dissent through comics goes back much further, said M.K. Perker, an illustrator at Penguen, the magazine with the ballot box cartoon on its latest cover.

Perker traces the practice back to the 1880s when cartoonists in popular publications began mocking Sultan Abdul Hamid II, nicknamed the “Red Sultan” for his massacres against minorities in the Ottoman Empire. Regularly caricatured with a large nose, the sultan went as far as banning both the depiction and the word “nose” in newspapers and forced the cartoonists to flee to Switzerland, Perker said.

Nonetheless, political comics have been a part of Turkish society ever since, even in times of strict censorship, he said.

Today, in a country where 60 journalists sit behind bars and at least 59 were recently forced from their jobs for covering anti-government protests, caricatures lampooning Erdogan regularly adorn the covers of several nationally distributed weekly comic magazines.

However, being a cartoonist in Turkey is not without its risks. Several artists and editors at the comic magazines have been sued by the government and criminally prosecuted for their work. In 2012, arsonists attacked Penguen’s downtown offices, causing a fire that nearly killed the magazine’s co-founder Metin Ustundag, Perker said.

The magazine has since moved its headquarters into the business district, but Perker laughed at the notion that the building’s security offered any real safety.

Penguen’s rival comic magazine, Uykusuz, continues to occupy offices in Istanbul’s central Beyoglu district, a stronghold of secularism and nightlife in the predominately devout Muslim country. It shares the building with a multitude of bars offering tequila specials of six shots for $11.

Uykusuz artist and co-founder Memo Tembelcizer said he has never seen the media under so much pressure since he first started drawing for publications in 1989.

“If I were single and had no kid, it would be easier for me, but it is not easy to not feel afraid,” Tembelcizer said. On the other hand, he says: “To be killed because of things like this, you have to be more popular. I’m not that popular.”

Not all of the illustrations are for laughs. Perker said sometimes they are compelled to ditch the comical to take a stand.

Earlier this month, clashes between riot police and protesters erupted once again after the death of Berkin Elvan. Elvan was a 15-year-old boy who had been in a coma since being struck in the head by a police tear gas canister the previous June. His family claimed he was not involved in any protests, but was going out to buy bread. In public statements, Erdogan said Elvan was a member of a terrorist organization.

Hundreds of thousands gathered for his funeral and the event appeared to reignite popular anger that had been largely dormant since major protests the previous summer.

After news of his death, the illustrators and editors of Penguen agreed to scrap their previously planned cover, creating a new one at the last minute just before press time. It illustrated graffiti on a white background with the phrase “here’s a thief!” which had become a common chant among opponents of the ruling party following the corruption allegations. In the illustration the word “thief” was crossed out and replaced in red by the word “murderer,” accompanied by a portrait of Elvan.

Following news of Berkin Elvan's death, the editors of Penguen scrapped their previous cover for this one. (Penguen/Nicholas Clayton/Courtesy)

“It was a direct statement. We were very much in sync with the public,” Perker said.

Kalaycioglu said one of the main reasons Turkey’s humor magazines have been able to step forward as critical voices in the public is because they remain independently owned: Much the Turkish press has been tamed over the past 15 years not by direct government action but by economics, he said, with media groups being bought up by pro-government figures and others being consolidated into conglomerates that are loathe to risk their business dealings with the government.

Although that independence has kept them small — both Uykusuz and Penguen have a circulation of about 75,000 issues per week — it has also kept them insulated from pressure, Tembelcizer said.

Still, despite the historic place of humor magazines in the media landscape, Perker said he continues to worry for their future.

“In a way, it’s waiting for your turn,” i.e. one’s turn to be targeted. “It was the turn for many of the journalists that were kicked out of their newspapers — very established people — and very many television people got fired from their jobs,” he said. “It could be our turn in the near future if things continue this way.”