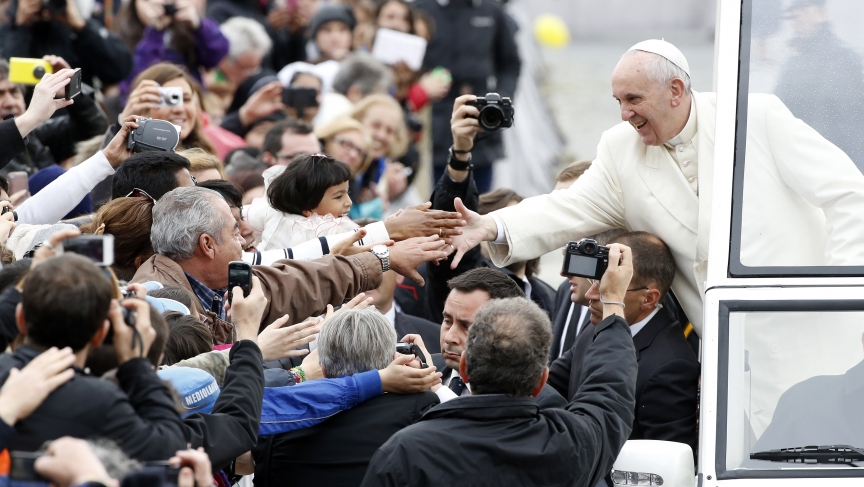 Pope Francis reaches out to greet the faithful in Saint Peter's Square at the Vatican on March 26, 2014.

Facundo Silva, 39, moved to the United States from Buenos Aires when he was in his 20s. Today, he's a firefighter, living in Washington DC.

He says he remembers coming home the day Pope Francis was elected, in March 2013, and hearing his family celebrate that the pope was from Argentina.

"It was a shock," Silva recalls. "I remember that same day, downloading this book that is now being translated into many languages, but in English it’s 'Pope Francis: Conversations with Jorge Bergoglio.' That same night, I read the book and I learned that he was from the same neighborhood. We only grew up four blocks apart. We went to the same church. It was just one thing after the other one."

Silva says it felt like he was having a conversation with the pope. "It felt that personal to me, and made me want to be a part of that. It had that profound change on me," he says.

Silva grew up Catholic, but says he began questioning his faith when he was a teenager. He says that doubt grew deeper when he moved to the United States and became an adult. "For me, a lot of things didn’t make sense," Silva says. "It wasn’t so much an issue with the church, but was more of a personal faith. I considered myself an atheist because I just didn’t believe in God. I was convinced there wasn’t a God."

But a journey back to the church started the day the pope was elected, Silva says. "[It was] his cordial tone. He was so down to earth. When he says 'Who am I to judge?' I feel like he’s talking to all of us."

"For me, here I am thinking about rejoining the church, you know. I've made that turn, made that change, and I’m starting to have faith again. And I’m enjoying the journey. But this is the beginning for me."