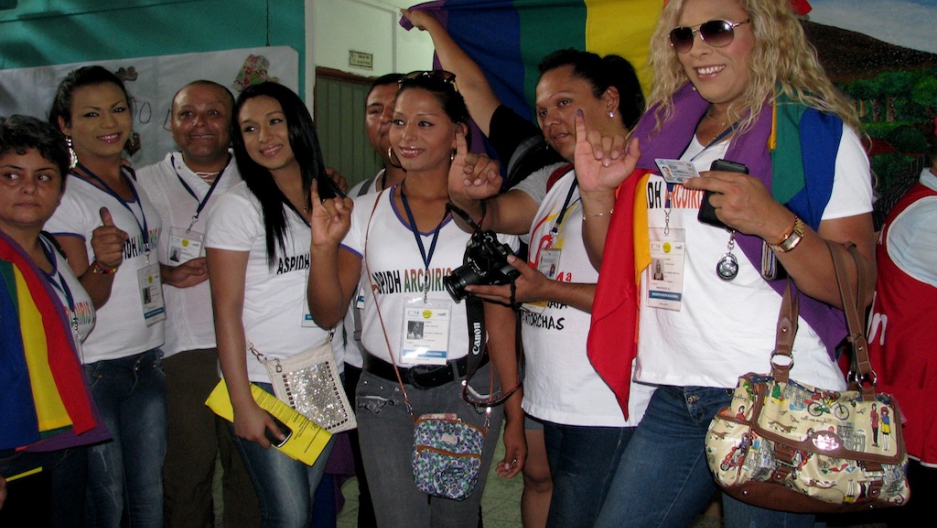 LGBT activists display their inked fingers after voting in the second round of the Salvadoran presidential elections, on March 9, 2014. in order to prove that a citizen has voted, fingers are dipped in semi-permanent ink after turning in the ballot. Third from left is Pati Hernandez, executive director of ASPIDH Arco Iris, and second from right is Karla Avelar, executive director of COMCAVIS trans.
Credit: Gloria Marisela Moran
Share

SAN SALVADOR and NEW YORK—Rubi Navas is among the first transgender women in the history of El Salvador to be allowed to vote.

In previous years, Rubi and her peers were normally barred from voting, because their physical appearances don’t match the masculine birth names on their national identification cards. The few who were able to cast ballots were lucky; an unusually progressive election official had probably let them by.

But on Feb. 1, three days before the first round of the 2014 Salvadoran presidential elections, the country’s Supreme Electoral Tribunal proclaimed that all people must be allowed to vote, without discrimination based on sexual orientation or gender identity.

While recent historic advances, like this one, were made by the administration of outgoing president Mauricio Funes, questions remain about whether his successor, Salvador Sanchez Ceren, will take the same proactive stance.

Despite previous progress, the climate for LGBTI rights in El Salvador is complicated by corruption and organized crime, which exacerbate the already pervasive issues of discrimination and violence.

On March 9, in the elections’ second and final round, Rubi went to the polls with a bandaged right arm to protect bullet wounds she sustained in an attack nearly one month earlier. In a violent episode all-too-familiar to many LGBTI people in El Salvador, Rubi was shot three times by an off-duty police officer.

While simultaneously enjoying a newly awarded right, Rubi arrived at the polling station still the unhealed victim of attempts on her life—an event which is representative of the state of LGBTI rights in El Salvador, and the ways in which discrimination still functions against LGBTI people.

On the night of Feb. 7, 2014, Rubi was working on a street near downtown San Salvador.

Like many transgender women in El Salvador, she is only able to find employment in sex work. An off-duty, intoxicated officer cornered Rubi, accusing her of stealing his mobile phone. When she denied the accusation, he shot her three times, hitting her once in the neck and twice in the arm.

Furthermore, the family alleges, the officer was charged only with inappropriately using a weapon, and not with attempted murder, as the law requires. When she was hospitalized, Rubi filed a criminal charge against the officer, but the police responded by charging her with robbery, and attempted to remove her from the hospital to have her incarcerated.

“I feel discriminated against. I was treated this way, not taken seriously, because of my sexual orientation,” Rubi said. “I ask that the LGBTI community’s word be considered as legitimate as any other human being’s—we also have human rights.”

Rubi survived the attack, but at least 145 other LGBTI Salvadorans over the past eight years have not been so lucky, according to the Salvadoran Human Rights Ombudsman’s office.

El Salvador is Central America’s smallest country, and the stark wave of attacks on this particular group has called the attention of international human rights institutions.

In response to the violence, and pressure from international institutions, former Salvadoran president Mauricio Funes had established a Sexual Diversity Directorate within his administration. The office was armed with a public policy tool, Executive Decree 56, which forbade discrimination by public officials for reasons of sexual orientation or gender identity.

However, violence and discrimination against the community continues. And because Funes’s advances were based on his executive decree—instead of legislative action or a popular vote—new President Sanchez Ceren can easily overturn them all.

During his presidential campaign, he committed to “deepening the social programs initiated” by Funes, but the LGBTI community is concerned that he never specified plans to continue the LGBTI rights initiatives.

“Neither of the two parties showed us a plan that specifically included the LGBTI community,” said Karla Avelar, executive director COMCAVIS Trans, a transgender organization. “There’s still a lot of fear; we have no guarantees of our safety.”

In addition to death threats, LGBTI people in El Salvador face discrimination in the workplace, at school, and in the public health system, according to a 2012 report by the human rights legal clinic at the University of California-Berkeley.

Sandra Rivera, the adjunct Ombudswoman for Civil Rights in the Human Rights Ombudsman’s office, said perpetrators of violent attacks on the LGBTI population are increasingly police officers and soldiers. These cases are not as frequently investigated as they should be, she added.

“The Ombudsman and I are truly very worried,” Rivera said. “Many cases haven’t been processed as they should, including some where the Attorney General needs to present evidence against the police and the army.

“Lately, there have been multiple allegations of human rights violations against LGBTI people by soldiers.”

The military has patrolled streets alongside police since 2009, when President Funes ordered it as a security measure in response to a rising murder rate and the burning of a public bus by gang members. But, Rivera said, “there are problems when the army carries out public security duties. A soldier’s training is different than a police officer’s training.”

Activist organizations say that all of this means that Rubi’s experience of truncated justice is the rule, not the exception, in human rights violations against the community.

Indeed, the government of El Salvador was called before the Inter American Commission of Human Rights in Washington, DC in Oct. 2013, in reference to the 2013 murders of five LGBTI people.

In its post-hearing report, the Commission demanded that the attorney general investigate, and treat the events as possible hate crimes. The report said that, “In the context of countries with high levels of citizen insecurity and organized crime, it is particularly important for States to adopt a differentiated approach to guarantee the rights to life and physical integrity of LGTBI persons and of LGTBI human rights defenders.”

So far, none of the five cases presented at the commission hearing have been resolved.

“It can't be true that the perpetrators of the cases presented in the hearing are still unknown,” said Ombudswoman Rivera. “This is a small country. The attorney general just hasn't investigated, hasn't given it the attention it's due. The Salvadoran state unfortunately owes a debt to the LGBT population. We have not been able to follow through on the [demands from the] hearing."

“History tells us that when people possess rights, we don't let them be taken from us easily. Even if the new government doesn't maintain Funes's initiatives, the sensitivity to LGBT rights that now exists in many public entities is irreversible,” she said. “Now, some people understand that being gay isn't a disease, it's not satanic, it doesn't mean you'll get AIDS by shaking a gay person's hand. Discrimination still exists—I’m not saying today that the battle has been won—but the seed has been planted and that is important.”

In some ways, the recent presidential elections echoed Rivera’s hope. Transgender individuals were not only legally allowed to vote, but furthermore to act as election observers. At least thirty LGBTI people did so.

“This represented justice for the community,” says Pati Hernandez, executive director of ASPIDH Arco Iris, a transgender organization that used Decree 56 to pressure the Supreme Electoral Tribunal to order non-discrimination in the election. “After so many rights violations and with no previous opportunity to vote, now we have the chance to influence public policy and be included in politics.”

Looking toward the future, activists have plans to pressure Sanchez Ceren to follow Funes’s lead.

"The LGBT community hopes for more concrete actions in our favor from this new president," said Wendy Castillo, lesbian activist and member of the activist organization Salvadoran Lesbian Women for Diversity. "We'd like the Sexual Diversity Directorate to be strengthened and expand its reach, for example."

But they aren't waiting for the attorney general to investigate, or the new president to announce his policy plans.

One of the main obstacles activists see in the way of equality is the inability for transgender individuals to get a national identification card that matches their name and gender. Rights groups are already working with the United Nations Development Program to write a gender identity law, which they plan to propose to the national legislative assembly later this year.

“We have a lot of faith—something has to get better somehow,” Castillo said.

Danielle Marie Mackey is a freelance journalist based in New York and San Salvador. She writes about law, public policy and human rights in Central America and the United States. Currently a graduate student at New York University, Mackey is originally from Iowa. More of her work is available here.

Gloria Marisela Morán is a Salvadoran journalist based in San Salvador. She covers gender, the environment and human rights for the ContraPunto digital newspaper. She has also written for HuffPost Voces. Morán holds a degree in Social Communication from the University of Central America. More of her work is available here.