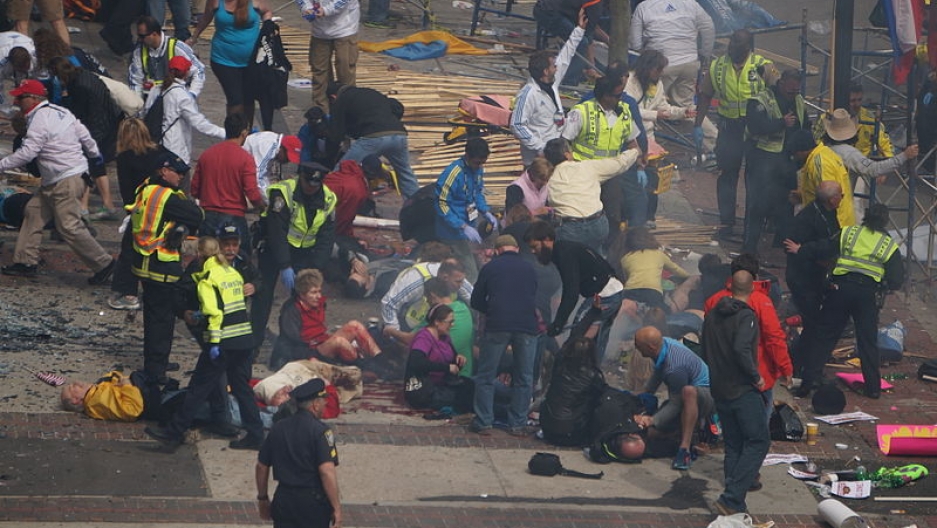 Aftermath of the Boston marathon bombing

As the anniversary of the Boston Marathon bombing approaches, a Florida state prosecutor has confirmed evidence implicating Tamerlan Tsarnaev in another crime in 2011 — a triple homicide — 18 months before the marathon bombing.

Tamerlan was the older of the two brothers accused of the bombing. He was killed during a police chase.

Various leaks had suggested that Tamerlan was implicated in a triple murder. But this is the first official confirmation that evidence exists.

Three drug dealers had their throats cut in an apartment in Waltham, Massachusetts, on the night of September 11, 2011.

"This provides official confirmation of most of my reporting," says Susan Zalkind, an investigative reporter with Boston Magazine. Zalkind has written extensively on the case and was also a friend of one of the victims in the triple murder, Erik Weissman.

The new evidence against Tsarnaev is a recorded statement from a known associate, Ibragim Todashev. According to the Florida state prosecutor, Todashev allegedly implicated himself and Tsarnaev during an interview with FBI. There are audio and video recordings of the statement.

But here's the rub. Todashev was killed just a few minutes after making that statement — shot by his FBI interrogator. Seven times.

The Florida prosecutor ruled Tuesday that the FBI agent was justified in shooting Todashev. Apparently, as Todashev was preparing to write a confession, he flipped a table, knocked down a Massachusetts state trooper and came back at the officers with a metal pole.

Still, Susan Zalkind has lots of questions. Why was the interview taking place in Todashev’s apartment? Given how violent he was known to be, why wasn’t he restrained? And, given the fact that there was an outstanding warrant out for him for another crime, why wasn’t he arrested? Why was the recording equipment turned off before things turned violent?

“Ibragim Todashev was loved by his wife, his girlfriend, his friends and his father,” Zalkind says, based on her conversations with many of these people. “But he was a very temperamental man. He could snap on the flip of a coin. And he was extremely violent and well-trained.”

Like Tamerlan Tsarnaev, Todashev was an ethnic Chechen immigrant and they trained together at a mixed martial arts gym in Boston, along with one of the victims of the unsolved murder.

“The initial murder case hadn’t really been investigated thoroughly,” says Zalkind. “Tamerlan Tsarnaev was never questioned, even though his name was given to police.” Many other obvious leads were not pursued, she says.

She doesn’t want to speculate about why the police weren’t more curious about the case, “but the most obvious reason was that [the] three men who were killed were drug dealers. And it seems police weren’t interested in exploring any explanations except for a drug deal gone wrong.”

The drug stash and several thousand dollars in cash were left at the scene, untouched.

“Had the local police solved that triple homicide,” Zalkind concludes, “we wouldn’t be dealing with the Boston marathon bombings. That 8-year-old boy would still be alive and so would the other victims.”