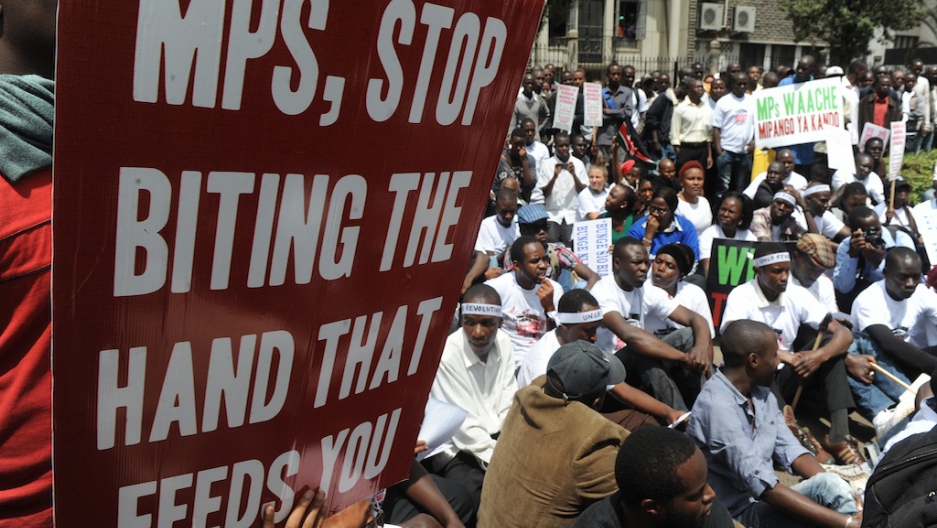 A protester holds a placard during a demonstration against Members of Parliament who have demanded higher wages, outside Parliament in Nairobi on May 14, 2013. The protestors had intended to occupy parliament but were dispersed, beaten by police and arrested.
Credit: SIMON MAINA
Share

NAIROBI, Kenya—Kenya’s President Uhuru Kenyatta ignited a nationwide debate over government employee wages this month when he surprised the country by announcing he would reduce his own salary by 20 percent.

The move signaled the beginning of a fierce debate over government wages, which are rising out of control: This year, public sector salaries are expected to eat up 54 percent of all tax revenue and equal 13 percent of the nation’s GDP, according to cabinet secretary in charge of the Treasury, Henry Rotich.

Kenya currently pays out some 543.7 billion shillings, or $6.4 billion, per year in public salaries and benefits. But recently that figure has been rising at the rate of 21 percent per year, “well above (Kenya’s) nominal GDP growth of about 14 percent and population growth rate of about 3 percent,” said Rotich.

Kenya employs some 700,000 civil servants, making the public sector a sizeable employer in the country. But as wages continue to take up a greater share of the national budget, many fear Kenya will lack the funds necessary to invest in infrastructure and other development projects that are critical to supporting the country’s economic growth.

“The recent growth in public sector wage bill is unsustainable and unacceptable,” Kenyatta said in a March 10 speech that sparked the wage debate. “If we maintain this trend we would be dedicating an ever larger share of the wealth we produce as a country to the remuneration of public servants.”

Kenya’s wage crisis is more complex than a problem of too many workers earning too much money. Most worrisome is the enormous discrepancy between the salaries of those at the top-earning government jobs, and those who form the base of the public workforce.

“An individual in the lowest job group earns 1 percent of the basic salary of the highest earner in the service,” according to the report.

While there is a general consensus here that something must be done to ebb the rising cost of Kenya’s public sector, there is fierce disagreement over how precisely to do it.

Teachers, municipal workers and others who make up the base of Kenya’s public workforce say the solution isn’t to cut salaries at the bottom, but to cut fat at the top.

Ann Mimano, a teacher at Muslim Primary School in Nairobi who holds an advanced degree, said the argument that her salary should be decreased is outrageous. She said she earns 48,00 shillings ($564) per month with a housing and transport allowance of 22,000 shillings ($259), and that some of her colleagues earn as little as 11,000 shillings ($129).

Mimano, 52, has been the sole provider for her two children and her husband after the latter retired from a job as a water engineer, although he receives a pension. Their children attend a local college on scholarship.

“When my children come… they should not come and find me broke. A pay cut is traumatizing to everybody,” Mimano said.

Long before the government cuts the salaries of teachers and other middle-class workers, officials should slash salaries and benefits at the top, starting with the administrators, Mimano said.

“Already they have millions [of shillings], and they still want the little I earn?” Mimano said. “I see governors asking for more money, and in this county I haven’t seen even a centimeter of tarmacked [paved] road, neither has this school been [re]built.”

Indeed, the most high-profile debate over public sector wages in recent years has surrounded members of parliament themselves, who many Kenyans believe earn egregious amounts.

Members of parliament currently earn 532,500 shillings ($6,264) per month, but many want even more: Less than six months after the SRC successfully reduced the monthly parliamentary salary from 851,000 shillings ($10,000) to the current wage, parliamentarians were at it again, trying to amend the constitution to allow them to set their own pay.

The amendment failed, but in June 2013 the Parliamentary Service Commission nevertheless managed to earn all members of parliament a onetime, 5 million shilling ($59,000) grant for a vehicle.

Beyond the discrepancy between high and low earners, a disorganized pay scale exists between different government agencies: “Employees with identical skills and experience are paid differently by agencies in the same government without regard to performance and productivity,” Kenyatta said.

SRC Chairwoman Sarah Serem said the country's bulging wage bill is no longer “an SRC issue but a public one. We want Kenyans to tell us how we can best manage our public resources.”

To that end, the Commission is turning the question of government wages to the masses, holding public forums in each of Kenya’s 47 counties. Officials will begin each session by explaining why the rapid increase in public wages causes such a problem in Kenya. Then they will solicit the opinions of all those who attend and debate such topics as disparities in government salaries.

Next month the Commission will convene in Nairobi to review this public input as members draft a new National Wage Policy to recommend to President Kenyatta.

Many of the president’s political opponents have denounced the forthcoming wage bill, saying a reduction in salaries is far less important than addressing the issues of corruption, unemployment, and the high cost of living.

“You cannot purport to be working on how to reduce the country’s wage bill by reducing other people’s salaries while prices of basic commodities remain high,” said Raila Odinga, the leader of the opposition party Orange Democratic Movement.

Some among the opposition have accused President Kenyatta of turning his back upon his own government employees.

“This national debate on our wage bill is not an exercise meant to shame our civil servants,” Kenyatta said. “Yes, it is good to pay our people well, but this must be done in a manner conducive to our development agenda.”

Some here say wage reductions are unnecessary altogether. They point out that government revenues are at an all time high, and growing rapidly.

The Kenya Revenue Authority (KRA) in January announced it collected 471 billion shillings ($ 5.5 billion) in taxes between June of 2013 and January of 2014—24 percent more than it collected in the same period last year.

But high salaries in the public sector may also be hurting Kenya’s private sector by putting the country’s most promising individuals in positions where their impact may be limited, as opposed to private sector jobs in which employees might have more opportunities to contribute new ideas.

“The private sector is compelled to pay higher salaries to retain talent, which has led to reduction in the money available for investments that would lead to job creation,” she said.