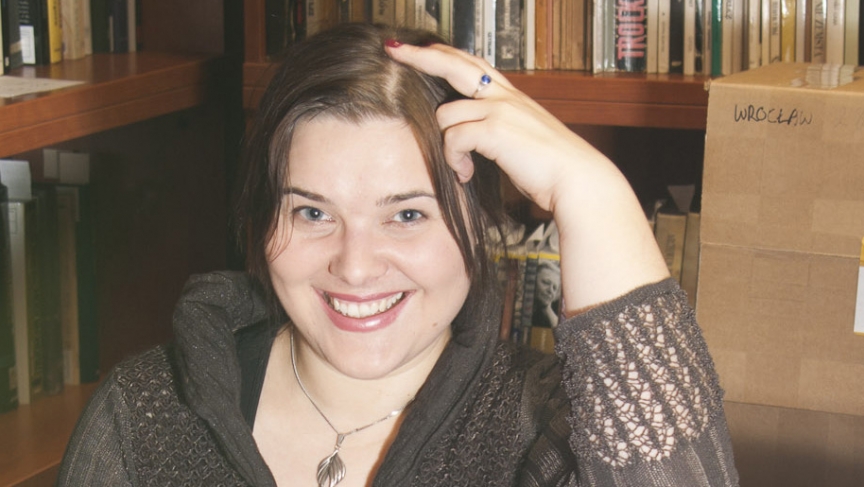 Aga Ilwicka-Sheppard, a doctoral candidate in Jewish Studies at the University of Wroclaw in Poland, was instrumental in getting the Yiddish Book Center in Amherst, Massachusetts, to send 3,000 Yiddish language books to Poland, including novels, dictionaries and other works.

When Aga Ilwicka-Sheppard was a child in Poland, her father would read her stories by Sholem Aleichem, translated from Yiddish.

“From Sholem Aleichem, we jumped to the Bible,” Aga said. “And Dad said, 'look how wonderful is this culture.'”

He was talking about Jewish culture, something that was hard to find in Poland in the decades after World War II and the Holocaust.

Aga entered the University of Wroclaw planning to study classics. “But inside,” she said, “something was calling me, for getting more knowledge about the Jewish culture.”

Aga is not Jewish. Now 27, she’s among a small group of young Poles who are helping in the effort to revive Jewish culture and scholarship in their country.

Poland used to be a European center of Jewish life. But when the Nazis exterminated most of Poland’s Jewish population in the Holocaust, they also obliterated Poland’s vibrant Jewish culture. Polish Jews who managed to survive mostly emigrated. Some of those who stayed hid their identity, fearing persecution. As recently as 1968, the Polish government expelled thousands of Jews.

But in the past two decades, there’s been a resurgence of interest in Poland's Jewish history and culture. Aga attributes some of that to the government’s campaign to promote multiculturalism as part of its bid to join the European Union. Now, many small towns — in addition to major cities like Warsaw and Krakow — host Jewish music festivals. And Jewish studies departments are becoming more common at Polish universities.

Aga took her first Yiddish class at the University of Wroclaw in 2008. She has gone on to do doctoral work in Jewish studies, focusing on Yiddish literature.

“We opened the books which nobody had touched here,” she said. “We talked about topics which maybe someone in America or Israel or even Germany had discussed every day, but here in Poland, we are among the very few people who are thinking about such topics.”

But with the growing interest, there aren’t enough Yiddish books in Poland for serious students, like Aga.

In 2011, Aga read that the Yiddish Book Center in Amherst, Massachusetts, which has more than one million Yiddish books in its collection, was sending hundreds of books to Vilnius, Lithuania, for a new Jewish library being built there.

“I thought, why Vilna?” Aga said, using the Yiddish name for Vilnius. “In Poland, even at my university, we struggle with the lack of the books.”

With that in mind, she applied for a year-long fellowship at the Yiddish Book Center, hoping she could procure “a few dictionaries” for her university.

Once she arrived in Amherst, where the center is, she proposed a project to send Yiddish books to Poland. Aaron Lansky, the center’s president, and Catherine Madsen, its bibliographer, were eager to help. So Aga began contacting Jewish institutions all over Poland, and found out that the need for Yiddish books was even greater than she realized.

“I started talk to people. ‘What do you need, what for, who will use it?’ So I knew exactly to whom I will address this project,” she said.

Then, Aga set to work gathering books and packing them into boxes. She enlisted the help of college and graduate students studying Yiddish for the summer.

“I had to wait until they got some knowledge of the Yiddish,” Aga said. “They had to be able to read the Yiddish and at least identify the [cover of the] book.”

In the end, the Yiddish Book Center raised enough money to cover the expenses, to ship 3,000 books to 14 locations in Poland.  Recipients included Jewish cultural centers, libraries and Jewish studies departments — in small towns as well as in Warsaw, Krakow, and Lublin. Aga’s own institution, the University of Wroclaw, received 1,000 books.

Aga is thrilled these books are now accessible to anyone who wants to read or study Yiddish in her home country.

“This is our treasure — the biggest treasure, maybe, that we hold, because it’s lost,” she said. “To some extent, it’s forgotten, and we had to learn and rediscover this culture once again.”