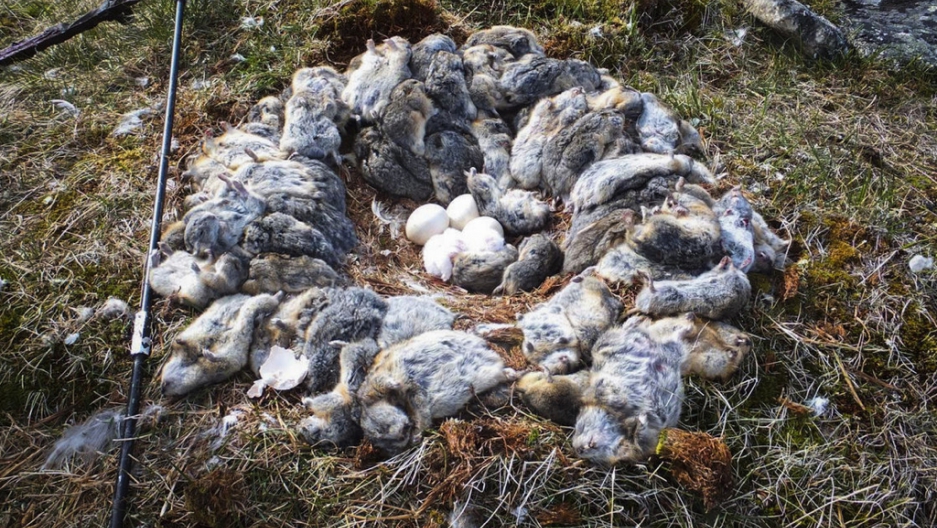 This photo looks like a lemming bomb exploded but it’s actually a snowy owl nest in Canada’s Nunavut territory. Snowy owls are known to stash a rodent here and there around the nest to feed their young. But 70 lemmings — the number counted by biologist Jean-Francois Therrien — is pretty much unheard of.

Lemmings are the primary food source for many Arctic species and their populations spike and crash in four-year cycles, affecting animals all the way up the food chain. Last summer, when the photo was taken, the Canadian Arctic lemming population reached record levels and carpeted the tundra with rodents.

As you can see, they killed waaaaaaay more lemmings than they could possibly eat and basically decided to build houses out of them. The owls were better fed, so they laid more eggs (up to 14 instead of the usual seven to eight) and produced fatter, healthier owlets who ATE LIKE KINGS. And that's how a simple lemming explosion fueled a corresponding boom in the snowy owl population.

Scientists are speculating that this may be why we're seeing so many "snowies" in the United States this winter. They typically winter in southern Canada but this year they’ve been spotted all the way down the east coast in Massachusetts, New York, Washington, DC, Kentucky, Georgia and even Florida.

They've also been spotted in the midwest, around the Great Lakes region, “perched on floating ice, staring down ducks and other migrating birds,” reports the Washington Post. The raptors seem to like the local cuisine. Scott Weidensaul, an owl expert, notes:

“They will eat pretty much anything they can jam down their throats — ducks, gulls, geese, muskrats, great blue heron. They’re a very big, very strong, very capable predator. On the Delaware coast, they were seen feeding on a dolphin carcass. That’s a new behavior we’re documenting this year.” (emphasis and screaming added)

The sudden increase in snowy owls from the north — known as an "irruption" — happens every three to four years but this is the biggest one in half a century. And it’s very, very good news for owl researchers who now have an unprecedented opportunity to learn more about the mysterious birds.

One research initiative is Project SNOWstorm — a collaborative effort launched by Weidensaul and biologist David Brinker through an Indiegogo campaign. The group includes dozens of scientists, wildlife experts, agencies and organizations across the United States. WGBH reports:

“... their goal to tag as many owls as possible with GPS transmitters. By studying the owls' movements — for example, the fact that they hang out at airports, the scientists hope to better understand their behavior and protect them from hazards.”

Experts visit places where snowies have been sighted, trap them and take various physiological measurements. Then they fit the owls with lightweight, solar-powered GPS transmitters that regularly report data on the birds’ latitude, longitude and altitude — including their return flight north to the Arctic.

One of the biggest conservation challenges goes back to lemmings.

Climate change has begun to alter the Arctic landscape — affecting everything from the vegetation cover to the texture of the snow itself. While Canada’s lemming population appears stable, it may be starting to drop in Scandinavia and Greenland, notes the Washington Post. And fewer lemmings means fewer majestic, snowy owls.

To learn more about the historic 2013-14 irruption and to check out cool maps tracking the birds, visit the Project SNOWstorm website here.