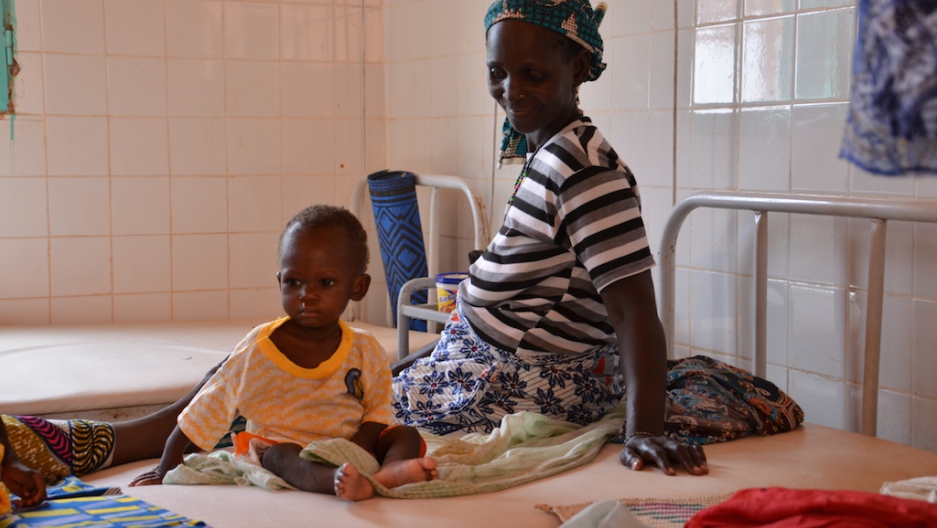 A picture taken on October 14, 2013 shows a child suffering from malnutrition eyed by his mother at a hospital in Tillaberi, western Niger. Saumya Dave traveled to Niger with New York Times columnist Nicholas Kristof in 2011 and wrote articles on global women's health.
Credit: BOUREIMA HAMA
Share

Editor's note: This weekend President Bill Clinton, Hillary Rodham Clinton, and Chelsea Clinton will convene more than 1,000 undergraduate and graduate students from around the world at the Clinton Global Initiative University in Phoeniz, Arizona where attendees will work to address global challenges, including health. Saumya Dave will join the group of young leaders. She is a medical student and writer who traveled with New York Times columnist Nicholas Kristof to North and West Africa in 2011 to report on global women's health. As a result of the experience, she founded MoBar, an organization to improve maternal health in the region.

MOLII, Niger — When I met Miero, I had no idea that she was eight months pregnant.

Unlike the pregnant women I’ve seen in America, Miero’s abdomen was flat and her sharp ribs protruded through her dress. Our conversation was a sharp contrast from the ones I had with women in America. No discussion of prenatal vitamins. No ultrasound dating. No measuring of fundal height. Instead, Miero told me that she hadn’t eaten in one day. Her reason was simple: she gave any available food to her family and counted on having whatever was left.

I was in her village of Molii in Niger because of a trip through Northwest Africa with journalist Nicholas Kristof.

Throughout our journey, we absorbed the stories of many women. I learned about the millet grain, an important food source, and the way women in villages walked to the well every morning to collect water in large buckets.

The women were independent in a way I hadn’t seen in America, occasionally relying on one another if they needed to, but for the most part, embracing all of the responsibilities placed on them. In every community I saw an underlying theme: women were taking care of their families and it was often at the expense of their own well-being.

Miero and I sat across from one another while two translators helped us communicate.

“Who helps you when you are ready to have a baby?” I asked.

She explained that there was just one woman in the village who gave prenatal advice and helped deliver babies. This woman did not have medical training but everyone trusted her and that was enough.

I later learned that this was common in many villages and that in most cases, women preferred this over care from a stranger, even if the stranger was a physician or trained midwife.

When Miero and I said goodbye, I reached into my bag and handed her a protein bar. She broke it in half and offered me the bigger piece. A few minutes later, I made my way towards our Jeep but knew that a part of me was going to stay there, somewhere amidst the solar powered huts and straw mats. I wondered if there was a way to change the stories of women like Miero.

Before the trip, I had read about the United Nations Millennium Development Goals. The third goal is to promote gender equality and empower women. The fifth goal is to improve maternal health. Though it is beneficial to send food and supplies to communities in need, it is also important to understand the value of personal relationships in order to implement effective, long-term solutions.

Both Miero and her baby were at risk because of her lack of food.

Pregnancy increases the nutritional demands on a woman’s body and iron, folic acid, protein, calcium, and additional nutrients are required in larger quantities to provide both the mother and baby with adequate nourishment.

Deficiency of any of these leads to dire outcomes. For example, low iron levels can lead to anemia and hemorrhage, the latter of which is the leading cause of maternal mortality in Africa.

According to The World Bank, Niger has approximately 600 maternal deaths for every 100,000 live births. By comparison, war-torn Iraq has 60 while the United States has 20.

After I left Niger, I wrote about Miero’s story. While I have always relished the way writing allows me to capture the world for others, something about Miero demanded to be taken beyond the page. In that wide rift between awareness and action, there was potential to integrate both.

I eventually came up with MoBar, an organization I am developing a Clinton Global Initiative University Commitment to Action that will teach women how to make and sell nutritional bars.

The bars will contain non-perishable items such as almonds, dates, fennel, and corn cereal with nutrients aimed at filling maternal deficiencies. Since women within the community will be making the bars themselves, there is an increased chance that women like Miero will trust the product and consume the bars.

Microfinance organizations like Kiva have demonstrated that women who are given the opportunity to create enterprises have better health and economic outcomes. These women are less likely to become involved in child marriages and be victims of domestic violence.

As a future physician, I want to alleviate the burdens of every patient I meet. However, for each patient I encounter, there will be thousands more that I won’t be able to access. A self-sustaining enterprise allows women to help each other, and as a result, help their communities. MoBar will change women’s stories by improving maternal health, empowering women, and fostering their relationships.

Saumya Dave is a medical student at Georgia Regents University and participant in Clinton Global Initiative University 2014, whose writing has been featured in The New York Times, Lancet, British Medical Journal, India Abroad, and The Feminist Wire.