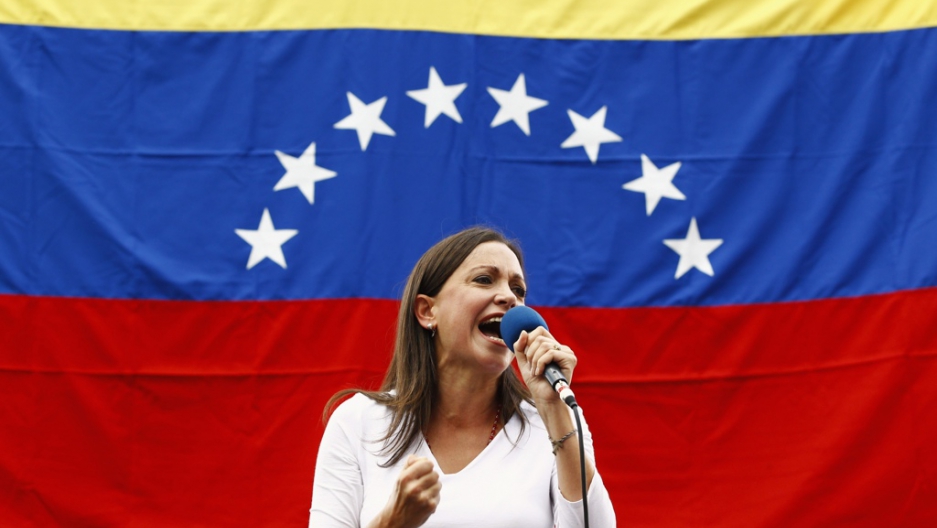 LIMA, Peru — A prominent Venezuelan opposition leader was in Washington, DC, Friday to detail her accusations of government repression — but the media was not permitted to hear what she had to say.

Maria Corina Machado, a conservative congresswoman from Caracas, was only able to address the Organization of American States (OAS) in the US capital after Panama made a highly unusual move of inviting her to take its ambassador’s seat.

Even then, Venezuela's representative and his allies in this hemisphere's top diplomatic arena voted to block access to the press for the session, which would otherwise have been open and streamed live online.

Machado is an outspoken critic of the so-called Bolivarian socialist governments of President Nicolas Maduro and his late predecessor, Hugo Chavez, and has played a leading role in the anti-government protests rocking the oil-rich South American nation for the past six weeks.

Her appearance at the OAS could hardly come at a more sensitive time, with Maduro launching a new crackdown on his critics.

Earlier this week, Venezuela’s National Assembly voted to approve a criminal investigation of Machado for supposedly instigating the violence that’s frequently associated with the protests.

Congress now needs to lift her legislator’s legal immunity but that seems a formality. Machado faces the prospect of being jailed like Leopoldo Lopez, another opposition leader who has encouraged the demonstrations against widespread food shortages, skyrocketing inflation and the horrendous violent crime wave engulfing Venezuela.

Separately, two opposition mayors have been arrested in the last 48 hours — with one already sentenced to 10 months in jail — for failing to remove the street barricades put up by some of the protesters.

More from GlobalPost: A who’s who in the Venezuela crisis

But whatever points Machado made before the OAS are a mystery to the outside world after Venezuela and Nicaragua, another Latin American nation ruled by a populist left-wing president, pushed for the meeting to be held behind closed doors.

Some other nations followed suit. "The objective of this meeting is not to turn itself into a circus for an outside audience as some representatives have shown they want to do," Brazil's ambassador said, according to Agence France-Presse.

After making it a closed session was approved 22-11, Machado tweeted: “The peoples of the Americas should ask themselves what is the fear that the voice of the people of Venezuela is heard in the OAS?”

Like Lopez, Machado has publicly called for peaceful protests. Yet the demonstrations have frequently descended into violence, with more than 30 people dead, including protesters but also members of the security services and armed, motorbike-riding, pro-government militias called “colectivos.”

Diosdado Cabello, speaker of the National Assembly, said Machado should be tried for “instigation of criminal acts, treason to the country, terrorism, homicide, and calls to violence in an irresponsible way.”

Last April, she required surgery after her nose was broken in a violent confrontation in the assembly chamber as, she claims, Cabello looked on.

Venezuelan journalist Alfredo Meza tweeted this picture of Machado recovering in the hospital.

That incident was widely portrayed as a fistfight between two evenly matched sides, although official cameras within the chamber were allegedly pointed at the walls and roof at the time, suggesting opposition lawmakers may have been ambushed.

It followed a heated debate in which the ruling party voted to bar opposition legislators from addressing the chamber unless they recognized Maduro’s victory in last April’s hotly contested presidential election.

More from GlobalPost: Maduro to Obama: Give peace a chance, don't kill me

Machado, a 41-year-old industrial engineer, is one of the opposition’s more controversial figures. She backed the failed 2002 coup against Chavez, and has also been criticized for her confrontational style.

More moderate opposition leaders believe that has allowed her to play into the Maduro administration’s hands, as it seeks to keep the country polarized and divert attention from the economic chaos and crime ravaging the country.