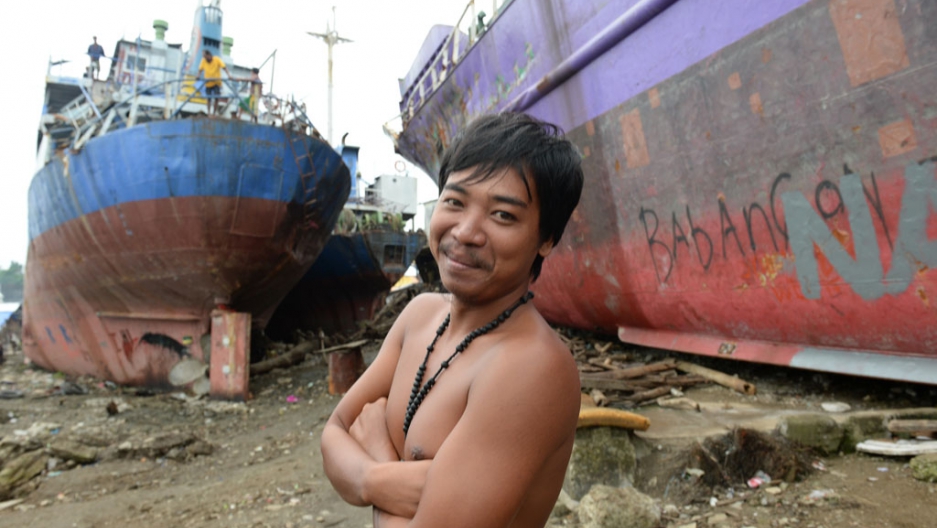 A resident stands next to cargo ships washed ashore during Typhoon Haiyan along the coastal area of Tacloban City in the Philippines on February 14, 2014. The devastating typhoon hit the city on Nov. 8, 2013.
Credit: TED ALJIBE
Share

Having a bad day? Well, suck it up.

Unless there’s a supertanker beached in your front lawn, your life is probably better than those in Tacloban, Philippines, and the people there all seem extremely “Happy.”

The video of their smiles and dance moves to the Pharrell Williams song is part of United Nations Foundation’s International Day of Happiness.

The Philippines is still rebuilding after Typhoon Haiyan cut a swath of destruction through the island nation more than four months ago.

That devastation is clear in the video submitted to Pharrell’s website, where a new “Happy” video from around the world is revealed every hour for 24 Hours of Happiness.

According to GMA News Online, the former NERD front man himself chose the submitted clips that appear online.

Tacloban was one of the areas hardest hit by the typhoon, UNICEF said on its website. Some schools are still unsafe while others are still being used as temporary shelters.

More from GlobalPost: One man’s Tacloban

The storm and its near 20-foot surge killed an estimated 3,000 people just in Tacloban, Voice of America reported. There are still 20,000 homeless there, the mayor told VOA.

Alfred Romualdez said recovery is slow, although he hoped to reveal a disaster avoidance plan in two weeks to avoid future catastrophes.

“Happy” videos are all the rage.

People film clips of themselves dancing to the music and post them online. They can also become political tools.

In Tunisia, the song is a stark contrast to that country’s continuing struggle for democracy three years after the Arab Spring.

More from GlobalPost: Tunisia’s ‘Happy’ video will make you dance