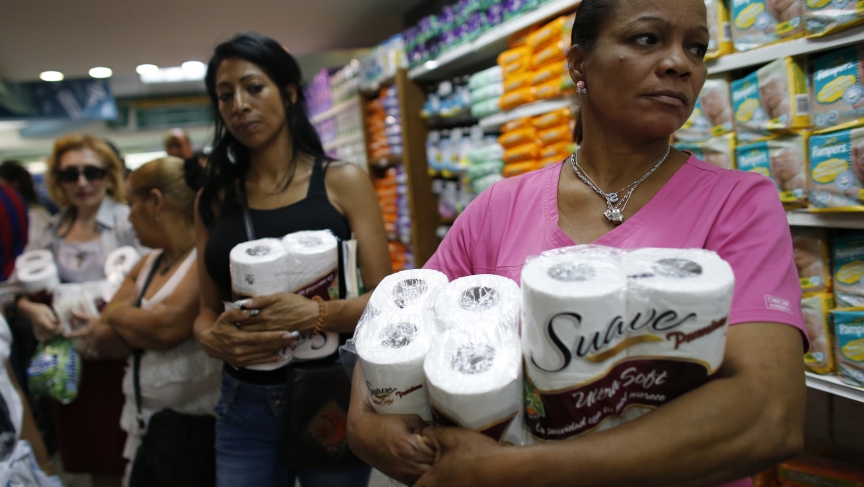 Women wait in line as they buy toilet paper at a supermarket in Caracas May 17, 2013.

Anti-government protests continue in Venezuela, and so do the crackdowns by security forces. The latest clashes took place last night in Caracas.

One of the main complaints against the government of President Nicolás Maduro is the mismanagement of the economy. And exhibit A would be the country's empty supermarket shelves and soaring prices.

Maduro blames the shortages on "capitalist speculators," who he says are stockpiling goods like toilet paper, bread and chicken to illegally re-sell them at higher prices on the black market. And the president has a solution — he is introducing a national grocery store ID card.

In theory, the card will function like many popular loyalty programs in the US. “Like at other supermarkets around the world, it will provide a set of initiatives to motivate and reward everyone who participates in the supply mission program,” Maduro announced over the weekend.

But some critics are calling it "the world's creepiest supermarket loyalty card."

Andrew Rosati, a freelance journalist based in Caracas, says the card will likely be used by the government "as a way to conduct a census of who is buying what in certain state-run supermarkets and stores across the country." The fear is that the government will begin to limit what consumers can purchase, and when they can do so. And Rosati says hard-line government critics even worry that the move may be "one of the first steps towards a Cuban-style rationing system."

Rosati says the key to fixing the shortages, though, seems to be fixing the flow of foreign currency. "Venezuela imports almost all of the goods that are consumed here, and one of the big reasons so many goods are not available now is unavailabity of foreign currency to get them," he explains.

"So until the government gets really serious about addressing how they're going to make more dollars available, I would imagine these shortages are going to continue."

But how about all those toilet paper hoarders? Maybe the card can at least stop them. Rosati doubts it.

He points to a chit system that was introduced in Venezuela two years ago to try and stop smugglers from moving cheap Venezuelan oil into neighboring Colombia. That initiative was unsuccessful — and he thinks it is likely that this attempt will be a failure, too.