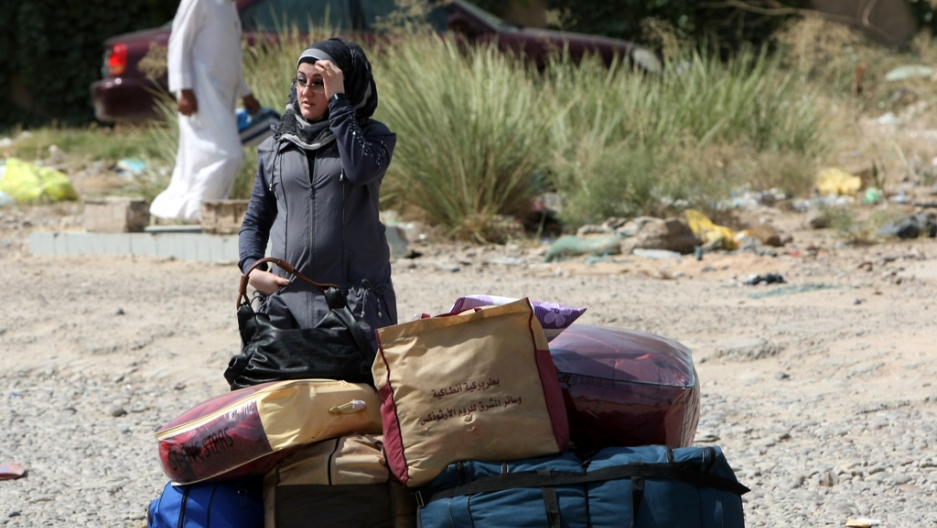 An Iraqi refugee, who had fled to Syria following the 2003 US-led invasion of Iraq, waits beside her belongings upon her arrival in Baghdad on July 3, 2011.
Credit: Ahmad al-Rubaye
Share

NEW YORK — On paper, he lived a dream life. Adi had a promising career at a large nonprofit and a scholarship to attend graduate school in his native Malaysia.

But he lived in constant fear. A gay man, he experienced relentless harassment and threats because of his sexuality, often from Malaysian police.

“It was really frustrating for me,” said Adi, who spoke on the condition his real name not be used. “You are always fearing for your life.”

He’s now seeking asylum in the United States, joining the 83,400 people who filed in 2012. America receives more requests than any other nation.

But life does not always get easier after reaching the US, especially because claimants cannot work for at least 180 days after filing for asylee status. In a recent report, Human Rights Watch called this a human rights breach. Immigrant rights groups and a majority of senators seek to change this rule, but reform is currently in the hands of House Republicans.

“You need to survive at the end of the day,” Adi said. “You need a roof over your head. If you’re not allowed to work, how will you support yourself?”

It used to be that applicants could claim asylum and work simultaneously. But in 1996, Congress passed the “asylum clock” rule, complicating the work authorization process. The clock starts the moment a seeker files. After 150 days, the claimant can request work authorization, and then must wait another 30 days for permission.

While most countries require a waiting period before asylum seekers can work, the US is unique in coupling court proceedings with work eligibility. Judges can stop the clock if an applicant appears to interrupt the process, and such delays are sometimes out of applicants’ control. For example, if the asylum interview needs rescheduling because of interpreter availability, the clock stops, prolonging the wait to work. Without a job, many asylum seekers find themselves without the means to survive.

“It winds up being a cruel punishment,” Delchiaro said. “Unless you have friends and family here who have a couch you can sleep on, you’re screwed. We have clients living on the street. It is kind of a nightmare.”

In May, the Senate passed an amendment to their immigration reform bill decoupling the asylum clock from court proceedings. Claimants would still wait 180 days for work authorization, but judges could not stop the clock for case delays.

Adi arrived in August 2012 on a State Department fellowship with a visa to work at another nonprofit. When the fellowship ended, he lacked resources, but decided to pursue asylum. Despite his qualifications, Adi took menial, under-the-table jobs to scrape by.

He found support at the Refugee and Immigration Fund (RIF), a nonprofit in Queens, interning with their Urban Farm Recovery Project. The project provides asylum seekers with scholarships to train at the Brooklyn Grange, a rooftop farming organization.

“We really see the transformation, particularly in women who’ve been victims of domestic violence. Then, it’s your core that’s been shattered,” Blacque-Belair said. “You really see people blossom.”

Tene Ouedraogo is among them. She fled Burkina Faso in 2002 after enduring years of domestic abuse and a forced marriage to her cousin.

“There was so much violence,” Ouedraogo said of her former life. “It was so aggressive. I was beat up for nothing.”

She wanted to bring her seven children along, especially since her husband forced their two eldest daughters to undergo female genital mutilation. She could not support them, however, and they currently live with her sister. Ouedraogo has not seen her children in 11 years.

When she she arrived in the US, Ouedraogo spoke no English and knew nothing of the asylum process. She paid an organization that promised to file her claim, but it didn’t submit her application as promised. Ouedraogo missed the federal filing deadline and was denied. Now she’s in legal limbo, waiting to appeal her case.

“I think good things will happen to me,” Ouedraogo said. “I know I’m in a good place. I’m safe.”

Asylum seekers must file claims within one year of arriving. If they miss the deadline, they lose eligibility, even if they qualify for protection. The current immigration reform bill passed by the Senate would eliminate this rule. Sen. Majority Whip Dick Durbin, D-Ill., said the deadline distracts judges from evaluating genuine claims.

“It ends up being an absolute bar to cases that are meritorious,” Durbin said during debates in May. “It creates an artificial barrier to people who would otherwise be eligible.”

Congress enacted the deadline in 1996 to prevent fraud, prompted by the perception that foreigners were taking advantage of the system. Since then, approximately 1 in 5 asylum cases are denied because of late filing. Though asylum procedures probably do detect some false claims, lawyer Delchiaro said the deadline is overkill, detrimental to those with credible fear of returning home.

“The view is, if you cannot get your act together and file asylum within one year, you don’t really need asylum,” Delchiaro said. “Until you work with these people, one year seems reasonable. But most people have no idea the rule even exists. They’re just trying to survive. They don’t realize there’s this urgency.”