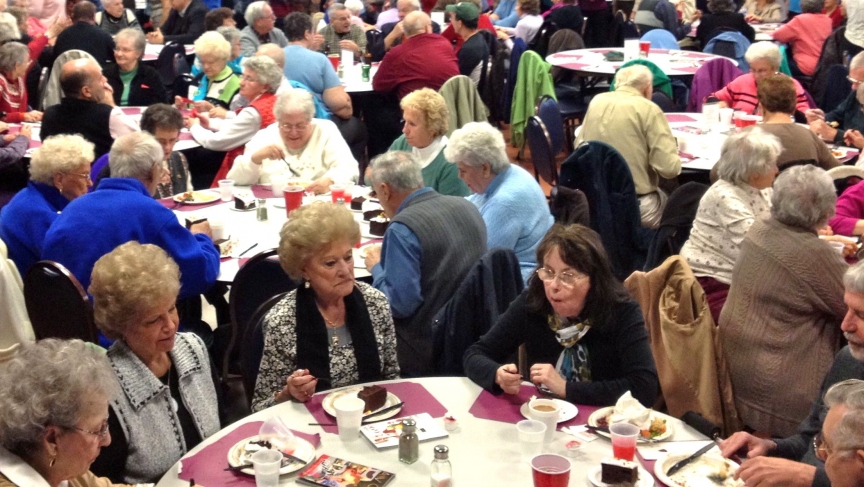 Le Rencontre is a French-speaking meetup at the Franco-American Heritage Center in Lewiston, Maine.

On a Thursday afternoon at the Franco-American Heritage Center in Lewiston, Maine, a few hundred people fill an old church converted into a concert hall.

Musicians play guitar and accordion and sing French-Canadian songs, while the crowd watches. It’s the last part of a monthly meetup — known as Le Rencontre — where locals gather and speak in French.

Most of the crowd grew up in Lewiston, or neighboring Auburn. They have French-speaking families, many of whom migrated from Quebec and other parts of Canada. Until a few decades ago, French speakers faced a lot of discrimination, including punishment in school for speaking French. Yet, the language managed to hang on.

Louise Bolduc is a regular at Le Rencontre, which means "the meeting." She’s 66, with long gray-blond hair and a spotless white baseball hat that says, C’est bon. I ask her if she speaks French a lot.

“Oui, c’est ma première langue,” she says. “That means, it’s my first language. When I started school, I didn’t know any English."

The director of the center, Louis Morin, is standing beside her. His parents migrated from Canada shortly before he was born. He and Bolduc continue talking, in French.

“It was the same thing for me,” he says to her. “I didn’t start speaking English until I was six years old. Before, I spoke only French at home.”

Louise Bolduc adds that, for her, it’s easy to keep up the language because her family still speaks it. They’re actually waiting nearby, and she runs off to join her sister and cousins.

Today, Franco-Americans make up 20% of the population in Maine. In Lewiston-Auburn, some officials say it’s closer to 70%. And a lot of them still speak French, as Bowdoin College Professor Chris Potholm found when he was doing a study.

“28% of Franco-Americans are fluent in French. Now, when you think about that, that wouldn’t be surprising if you were interviewing recent immigrants. But if you think of the Franco-Americans as being here for 250 years, that’s an astonishingly high number.”

But many Franco-Americans worry that number is going to decrease. And some are skeptical about kids picking up French once their families have stopped speaking it at home.

Across the river, in the city of Auburn, one after-school program is trying to revive local French. At Sherwood Heights Elementary School, over a dozen students are repeating the class rules, in French. One of the teachers behind the program, Doris Bonneau, translates: “Raise your hand to speak, to move from your space. Follow directions. Be polite. The golden rule is do your best. And the last one was: pay attention!”

Bonneau — who seems both patient and enthusiastic, especially when it comes to French — says the program is part of an effort to bring the language to younger generations. And rather than focusing on so-called “classic” French from France, kids are exposed to all sorts of dialects, particularly local ones that make up the French specific to Maine.

One of Bonneau’s students is 10-year-old Lucas Pushard. He says his grandmother speaks French, and that now, he can actually talk to her a little bit. He also mentions picking up on more French being spoken around town.

“It’s kind of like a secret language,” he says. “You can finally find out what people are saying, you’re finally in on it. It’s kind of cool.”

Another teacher in the program, Jacynthe Jacques, came here from Quebec. She was surprised to meet so many local French speakers. She noticed that words and accents from different parts of Canada come together in Maine. For example, she says, some locals have an accent from a smaller region within Quebec, called La Beauce.

“A bench in French is a banc, and a bath is a bain. But if you’re from La Beauce, you can sit on a banc and it’s almost the same pronunciation as bath,” says Jacques. “Little things like that.”

What’s also surprised Jacques since moving to Maine is the presence of French speakers from different parts of Africa, specifically in Lewiston-Auburn. She thinks that, with this new wave of immigration, French may be able to hang on here.

“I’ve noticed that, through this program and other venues, there’s a lot of getting together between the French-speaking communities in this area. And I think that’s great, because we meet in the language,” she says. 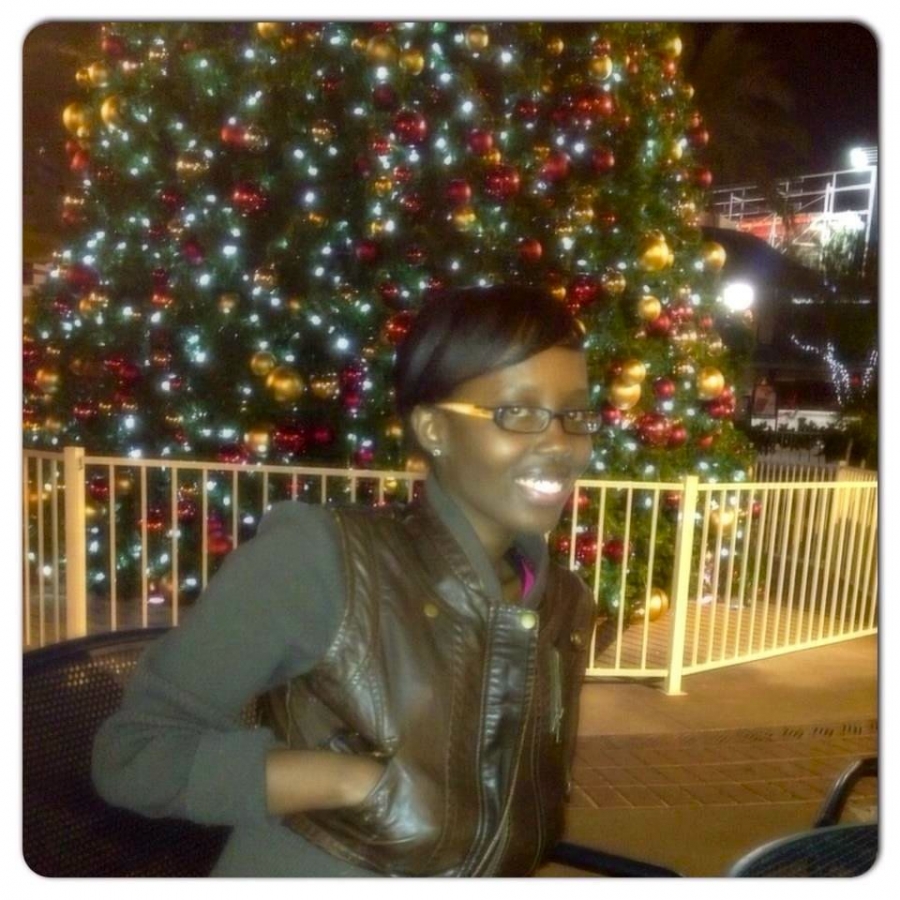 Back in Lewiston, French speakers from places like Ivory Coast, Chad, and Togo have attended the monthly Le Rencontre meetup. At the one I go to, I talk to 21-year-old Pierrette Rukundo, who moved here from Rwanda about a year ago with her three brothers and her parents. Rukundo says she’s excited to find this community of French speakers, and she plans on bringing her parents next time.

“They’ll be so excited. My mom will not stop talking,” says Rukundo. “I think she’ll be talking the whole time, because she’ll be with people speaking in French.”

Recent immigrants, like the Rukundo family, bring even more dialects into the mix of Maine French. They’re also likely to be key to the language staying alive.